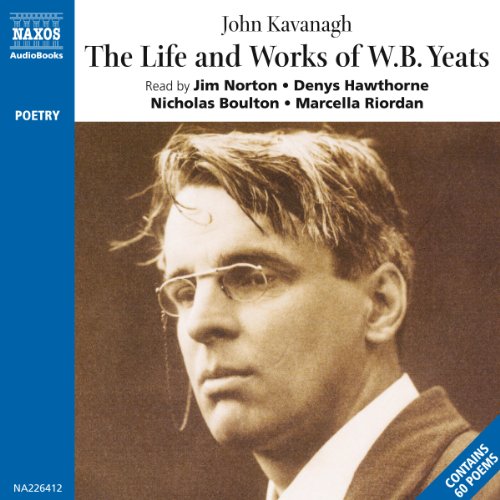 The Life and Works of William Butler Yeats

The Life and Works of William Butler Yeats

Narrators Jim Norton and Denys Hawthorn make this compilation of W.B. Yeats’s life and poetry a listening joy. From the lovely tenor voice that opens the audiobook to the recitation of many of the most beloved of the poet’s offerings, listeners will be enthralled. As well as providing captivating interpretations of individual poems, Norton and Hawthorn deliver the prose with equal passion without ever overdramatizing. They keep the biographical aspects engrossing as they detail the events in Yeats’s life that influenced his poetry. Top-notch listening for poetry lovers and those new to Yeats and the Irish tradition. 2003 Audie Award Finalist

William Butler Yeats remains one of the most popular poets of the 20th century.

"The Lake Isle of Innisfree," "He Wishes for the Cloths of Heaven," "Down by the Salley Gardens," "The Secret Rose": these are just a few of the poems that made William Butler Yeats an international figure. Born in Dublin in 1865, Yeats drew strength from the Irish tradition, as can be seen in this special audiobook, which presents the most important poems in the context of his life and ambitions.

His poetic urgency was fuelled by an active and varied life, as he gained his inspiration from the men and women he knew, classical sources, and contemporary politics.

Enlightening on all aspects of his life and work

Would you consider the audio edition of The Life and Works of William Butler Yeats to be better than the print version?

I enjoyed the audio mainly for the reading of his life and poetry and the music was an added bonus. If you miss the pictures that a book would have, there is always the internet.

What other book might you compare The Life and Works of William Butler Yeats to and why?

The Husband lives of Ted Hughes and Sylvia Plath. It compares favourably.

What about Jim Norton and Denys Hawthorne ’s performance did you like?

Greatest poet of his generation

What did you love best about The Life and Works of William Butler Yeats?

Very well-done. I wish it included more of Yeats' poetry.

A biography of Yeats, with selected poems (shorter poems.)

The speakers are excellent.

The quality was very good. The poems read were particularly good as they captured very well the rhythm, pace and meter of each poem. The recording presented a comprehensive anthology of Yeats' works at the various stages of his career. Though I enjoy poetry I am not well schooled in the art form. Therefore, Yeats' Byzantium that everyone seems to proclaim as his greatest work, fell on deaf ears with me. Like so many authors and writers of his era, poems written during WW1 seem to have a much darker cast underlying them.