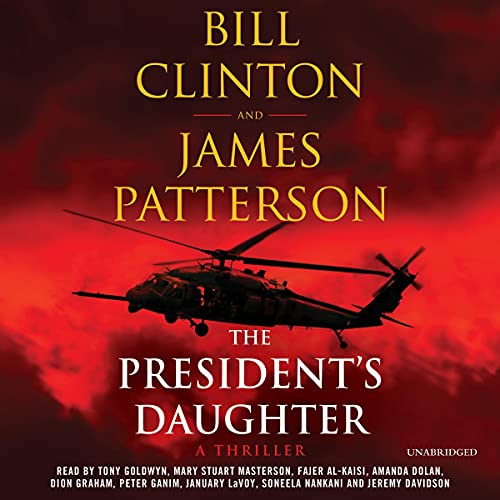 James Patterson and Bill Clinton - the “dream team” (Lee Child) - return with a thriller even more compelling than The President Is Missing. Every detail is accurate - because one of the authors is President Bill Clinton. The drama and action never stop - because the other author is James Patterson.

Matthew Keating, a one-time Navy SEAL - and a past president - has always defended his family as staunchly as he has his country. Now those defenses are under attack. A madman abducts Keating’s teenage daughter, Melanie - turning every parent’s deepest fear into a matter of national security. As the world watches in real time, Keating embarks on a one-man special-ops mission that tests his strengths: as a leader, a warrior, and a father.

The authors’ first collaboration, The President Is Missing, a number one New York Times best seller and the number one best-selling novel of 2018, was praised as “ambitious and wildly readable” (New York Times Book Review) and “a fabulously entertaining thriller” (Pulitzer Prize-winning author Ron Chernow).

i love the Clinton/Patterson combo. it is like getting and upgrade. with the Insight of the political Masa Nations of the u.s. White House oh, and the plot and intrigue development of experience rating oh, one gets an incredibly intriguing and fast paced and entertaining story.

it starts a bit slow and concentrates on technical info too much. But then it takes off with enough twists and turns to cause motion sickness. Does that mean I put it down? Not a chance! As long as it was, it is going to be some time before my brain gets back to normal and I am not wondering what Mel has been up to recently. ENJOY!

Though I really enjoyed this book I found far too much mph as is on types of guns used etc ...Not necessarily to keep repeating ........enough about AK47’s!!!!etc The performance was relly superb and ths was y first audible book

I love this book. The story is clean and grabs the reader's attention right from page one until the last. I would look forward to a sequel in the future.

Could have been more concise, and slow to grab my attention.
but a good premise.

Love.d it. The narration was great too.Can't wait for the next one.Excellent Best way to enjoy

What a great novel I was on the edge of my seat through the whole novel. It was a gripping story and cheers to both the authors I would definitely recommend this novel.

Good guys, bad guys, Americans vs Arab terrorists, revenge plot... lots of hardware very explicitly identified (type of weapons, ammunition, etc) and military jargon make this satisfying for many but I find it all-too-predictable and typical of this type of story (YES, this is a type of story). If you want a go-get-the-bad-guy tale where the white hats win, this is perfect.

I will go back to British murder mysteries, Elmore Leonard, or Michael Connelly stories for more cerebral challenges. Enough of the rah-rah-rah novels.

Started it but couldn’t finish it

I liked their last book, so I thought I might like this one. Sorry, but I didn’t.
Just a personal choice, I don’t like to listen to anything about children being killed. Just felt the story was unbelievable and I didn’t like it.
Also, it’s the first time I’ve been denied, returning a book. If I had been allowed to return it, I would not have written this review, and just moved on.

Both are in top form, as is the cast.

Though I recognize only a few of the narrators, all are in top form here. Storyline is very interesting and well-written as well, both authors giving it their all.

I enjoyed listening to this book. I listened to it in a day. Make the time read or listen.

I highly recommend this book. It was hard to put down once started. The story was very engaging. Fast paced, well plotted, very entertaining. Felt like I was reading the headlines with all the twists and turns. WOW, Patterson and Clinton are a great team. Well done! Narrators did an excellent job, and helped propel the story along.

I must say that Patterson-Clinton certainly have created a wonderful series and I hope they will continue. The performance was wonderful and because of it I listened almost none stop. I rate this book a 5

Terrific story with a cast of excellent readers

It's James Patterson, so, of course the story is going to be a winner. Having Clinton's input adds to the feeling of credibility.
The range of great readers adds even more texture and excitement to the audio experience.

After a slow start that was needed to explain the actions in the story, this was a great read. I loved that the narrators changed for each point of view. I highly recommend this book!

James Patterson and Bill Clinton have came up with a winner again! Its a nail bitter with lots of energy. The cast of performers did a great job. I highly recommend this to everyone!