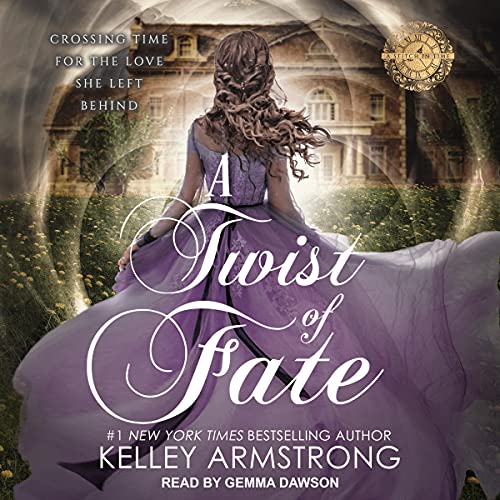 A Twist of Fate

Written by: Kelley Armstrong
Narrated by: Gemma Dawson
Try for $0.00

Three years ago, Rosalind Courtenay stumbled from the 19th century to the 21st, where she has been trapped ever since, leaving her husband and infant son behind. Now she's found her way back.

The problem, of course, is how to explain her absence to her husband. Does he think she abandoned him? Has he remarried? Is he happy in a new life? Rosalind decides to don a disguise in hopes of answering her questions before showing up on his doorstep. Instead, a twist of fate has her mistaken for her young son's new governess.

Rosalind has every intention of revealing herself as soon as August returns home from business. Until then, she'll get to know her son, a quiet child who has inexplicably been abandoned by an endless stream of governesses. That's when the hauntings begin. Rosalind has finally come home and something - or someone - doesn't just want her gone. They want her dead.

What listeners say about A Twist of Fate

I absolutely loved this second installment of the series. It's not my favourite genre, but when Kelley writes something, she writes it well. I will definitely be recommending this one to all of my romantic readers, and I'll have to pick up a paper copy for my collection.

This story felt dragged along and probably couldn’t have been half as short. Not what I usually expect from this author

Happy for the 2nd book to continue the series

I was very interested to see how the 2nd book would be intertwined with the 1st novel, and while this book is not quite as engaging as the this 1st one I was still moved to listen to it in one sitting.

If you like gothic novels like The Turn of the Screw, Rebecca, or Jane Eyre this book series will be up your ally. Will this novel be heralded is great literature as the aforementioned probably not but is is a fun enjoyable ride and worth a credit.

The 2nd book follow the disappearance of Rosalind the wife of August Courtenay. The Courtenay's live on a neighboring estate to Thorne Manor the home of William Thorne best friend of August . Thorne Manor the main setting for book 1 of the series is the epicenter of the "Time Stitch" that allows for people to travel between the 19th century and the 21st century. Rosalind is sucked through this rip in time unbeknownst to her husband. She is trapped in the 21 century for 4 to 5 years until she can return to her own time, this is where to heart of the story starts complete with a haunting.

My one pet peeve with the story is that we are told Rosalind is not impulsive that she studies and weights her options and this is how she is able to acclimate to the 21st century so much so we owns her own bakery business in just 5 years (never mind she would not have any personal documents or identification in this new time, but this is a fun book so I will let that go. . .). However, when she is faced with the key information of how to return to her home in the 19th century instead of doing the easy thing, the measured and sensible thing she act without thought. It is really this action that allows for much of the misunderstandings that are to follow. I dislike when a character takes actions that are out of character just so you can get them from point A to point B.

So while this book is not plotted as well as the the first is it still enjoyable and I look forward to more books in the series.

I have loved this author for years and have looked forward to new stories but this one is not worth the credit. The story was stilted & unimaginative. The narration was terrible, so slow that I had to speed it up to reach a “normal” speaking rate. All in all a waste of time.

I loved A Stitch in time and I was so excited for this book, I finished it the first day. I love how I couldn't guess what was going to happen next.

Not as captivating as the first book

An overall pleasant and entertaining experience, however, it was not as immersive as the first book, which I will definitely listen to again. This didn't have the same intensity and fell a bit flat in many places. The narrator was very well suited.

Great listen, would highly recommend. Good story line that keeps your in your toes. I especially loved the Ghost and romance aspect.

Not as good as I had hoped

I loved Stitch in Time. This story felt forced and shallow in comparison. Character development was not as good and emotional turmoil very repetitive. Wish I hadn’t spent a credit on it.

I really liked this book and enjoyed how the author was able to work humor into serious subjects. I look forward to listening to another book in the series.

You can never guess

This is in reason I loved this authors books 📚I cannot guess where the storyline is going like I can in some books. I love being surprised. A.P.

I enjoyed this book even more than the first one which doesn’t usually happen! usually the first ones are excellent and everyone after that kind of goes downhill . Not this one it was great I hope she has another one in the future that’s tied to this one

Lovely series. Romance, mystery, history, and intrigue.
Wonder performance and the reader had a nice voice.