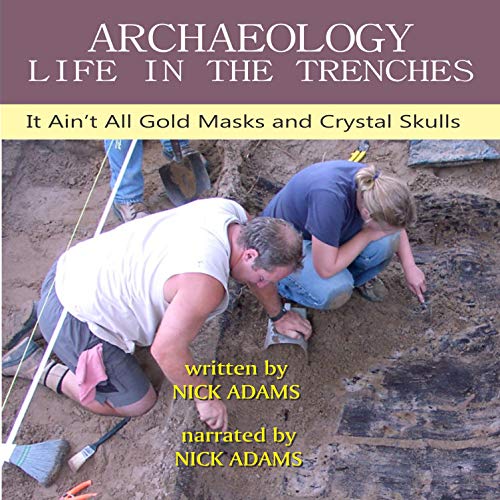 Archaeology is a beguiling occupation. Who wouldn't be attracted to finding cool, old stuff buried in the ground? It appeals to the child in us all.

But archaeology isn’t all gold masks, crystal skulls and temples. Often it’s chert flakes on a lake shore, burials in the forgotten corner of a field, or pioneer dwellings in the woods.

Sometimes, it just isn’t all that glamorous.

The reality is that for every well-known archaeologist - the kind you might see doing exciting things on TV - there are legions of less high-profile characters working in the background. Their work may not be quite as sexy or result in paradigm-changing discoveries, but it is important and valuable.

The following chapters are snapshots of archaeology from more than 40 years of work in both Britain and Canada. Rather than spending too much time on the scientific and technical, Nick has focused on stories that convey the life of a working archaeologist...well, his working life anyway.

Nick's stories are full of humor, a reverence for the natural world, and a respect for the lives of those who have gone before. There are no golden masks or crystal skulls here, but there is plenty of value.

What listeners say about Archaeology - Life in the Trenches

Nick Adams has a gift for description

Nick Adams certainly has a gift for description..... the book, "archaeology ...life in the trenches", opened my eyes to yet another thing I know nothing about. Mr.Adams gives a well-rounded account of the the path he took to become an archaeologist initially in England as a young man looking for work then chasing a lady to Ontario. He sort of "boot strapped" a nice career for himself in Kingston Ontario Canada. And what does an archaeologist actually do in Ontario?!
Well worth a listen if you want you learn about how it all works.