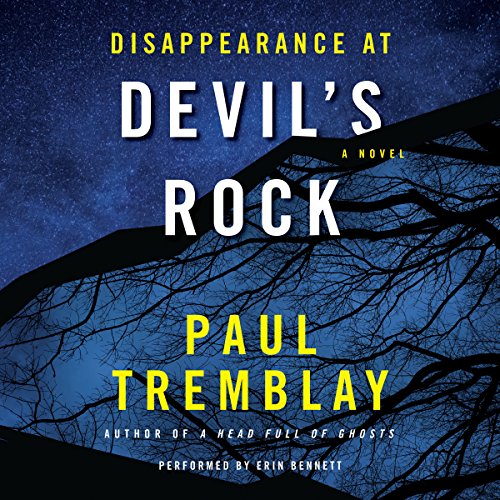 Written by: Paul Tremblay
Narrated by: Erin Bennett
Try for $0.00

A family is shaken to its core after the mysterious disappearance of a teenage boy in this eerie tale, a blend of literary fiction, psychological suspense, and supernatural horror from the author of A Head Full of Ghosts.

"A Head Full of Ghosts scared the living hell out of me, and I'm pretty hard to scare," raved Stephen King about Paul Tremblay's previous novel. Now Tremblay returns with another disturbing tale sure to unsettle listeners.

Late one summer night, Elizabeth Sanderson receives the devastating news that every mother fears: Her 13-year-old son, Tommy, has vanished without a trace in the woods of a local park.

The search isn't yielding any answers, and Elizabeth and her young daughter, Kate, struggle to comprehend Tommy's disappearance. They feel helpless and alone, and their sorrow is compounded by anger and frustration: The local and state police have uncovered no leads. Josh and Luis, the friends who were the last to see Tommy before he vanished, may not be telling the whole truth about that night in Borderland State Park, when they were supposedly hanging out at a landmark the local teens have renamed Devil's Rock.

Living in an all-too-real nightmare, riddled with worry, pain, and guilt, Elizabeth is wholly unprepared for the strange series of events that follow. She believes a ghostly shadow of Tommy materializes in her bedroom while Kate and other local residents claim to see a shadow peering through their windows in the dead of night. Then, random pages torn from Tommy's journal begin to mysteriously appear - entries that reveal an introverted teenager obsessed with the phantasmagoric; the loss of his father, killed in a drunk-driving accident a decade earlier; a folktale involving the devil and the woods of Borderland; and a horrific incident that Tommy believed connects them.

As the search grows more desperate, and the implications of what happened become more haunting and sinister, no one is prepared for the shocking truth about that night and Tommy's disappearance at Devil's Rock.

What listeners say about Disappearance at Devil's Rock

I loved this story. I read so many reviews expecting this to be the next "Head Full of Ghosts" and how disappointed they were that it was not. It was it's own story and held it's own. A great, suspenseful story from beginning to end with some key horror elements for optimal enjoyment. It was great.

What was one of the most memorable moments of Disappearance at Devil's Rock?

There was an element of supernatural which was left in a bit of a mist, it added to the mystery and discomfort level of the story. I like a story that makes me feel uncomfortable. I seek out stories like this one!

Have you listened to any of Erin Bennett’s other performances before? How does this one compare?

Wonderful performance by the narrator.

YES. It was so good. I tried so hard to listen to it all day and evening but fell asleep and lost my place!

Awesome story. Great elements of horror, supernatural, suspense, and surprise. I loved it.

I thoroughly enjoyed Tremblays Headful of Ghosts. This book strikes some of the same chords: well drawn characters that never descend into cliche, events that touch on but never quite land in the supernatural, and some truly chilling passages. Tremblay is not King or Koontz--he's merciless in taking his characters into unpleasant places and showing the logical consequences of their being there. He also doesn't feel the need to "Scooby Doo" his stories--sometimes there is no explanation for what's happening in the world! Really creepy.

I loved this book. It definitely catches your interest right off the bat, and the mystery of what actually happened to Tommy keeps you so intrigued till the end. I have not read Head Full of Ghosts but immediately purchased it after finishing this story.

Like others have pointed out, this story is strikingly similar to one of my favorite films, Lake Mungo. But that ended up not mattering one bit. I was still victim to chills, stomach drops, and a profound unnerved-ness throughout. This coming from a person not easily affected by horror. Something about Tremblay's narration style and weaving of themes is vividly beautiful, but also absolutely gets under my skin. After reading this novel and Head Full of Ghosts, I think he may have just sealed his place as my favorite horror author.

Similar to HFoG, this book was able to illicit an emotional response that I rarely experience during story telling, spoken or otherwise. Tremblay has such an understanding of childhood, it's comforts, and it's horrors that we're forced remember what is like to be young and naive in an increasingly ruthless world. His beautiful prose is a sweet aftertaste of his great ability to tell a story.

Story aside, the performance was great. The narrator was able to portrait the characters that kept me entertained and not gagging on an overly sweet delivery.

Great experience all around

Great book, but not what I thought it'd be...

I loved this book, but I thought it was going to be a supernatural thriller. Not so much.

After reading A Head Full Of Ghosts I wanted some more, so I picked this one. Not at all disappointed either. It's not in your face scary, but it does linger in your head. Subtle creepiness

The first three quarters of the book were exceptionally boring. I understand that the more supernatural elements of the story were supposed to be vague (is it real, or are they crazy?) but the overall effect was confusion. I guess I don't feel like I wasted my money, I didn't hate it, but I don't recommend this story.

Got this on the 2 for 1 sale b4 Halloween. Great narration but the story starts to loose momentum. Still worth a listen for fans of disappearance mysteries

What does Erin Bennett bring to the story that you wouldn’t experience if you just read the book?