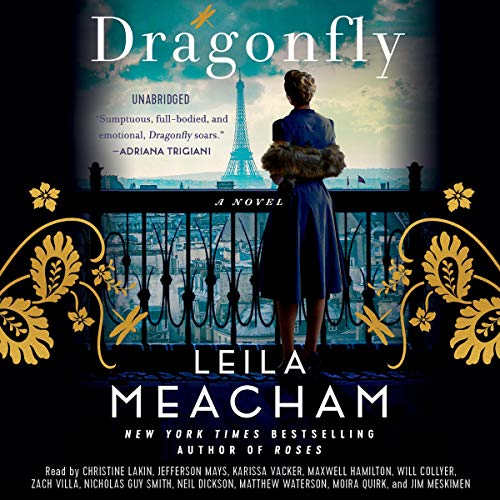 At the height of WWII, five idealistic young Americans receive a mysterious letter from the OSS, asking them if they are willing to fight for their country. The men and women from very different backgrounds - a Texan athlete with German roots, an upper-crust son of a French mother and a wealthy businessman, a dirt-poor Midwestern fly fisherman, an orphaned fashion designer, and a ravishingly beautiful female fencer - all answer the call of duty, but each for a secret reason of his or her own. They bond immediately, in a group code-named Dragonfly.

Soon after their training, they are dropped behind enemy lines and take up their false identities, isolated from one another except for a secret drop-box, but in close contact with the powerful Nazi elite who have Paris under siege.

Thus begins a dramatic and riveting cat-and-mouse game, as the young Americans seek to stay under the radar until a fatal misstep leads to the capture and the firing-squad execution of one of their team. But...is everything as it seems, or is this one more elaborate act of spycraft?

"Meacham ratchets the suspense ever tighter, while providing fascinating backstory on the intrepid five [American spies] as well as delivering a detail-rich portrait of Paris during the Occupation." (Booklist)

"Leila Meacham is a gift to readers everywhere. With scope and daring, she creates worlds in her fiction that keep us turning pages long into the night. Sumptuous, full bodied and emotional, Dragonfly soars." (Adriana Trigiani, New York Times best-selling author of Tony's Wife)

What listeners say about Dragonfly

A captivating spy thriller with well drawn characters and devious twists and turns of fate. Merchant draws the reader into the lives of these characters and we feel we know them as friends by the end. The WWII setting is familiar but the nuances of the covert operations engaging to read. Loved it! Can’t wait for the mini- series! ( hopefully!)

This is the best book I have heard in the suspense/mystery classification in many years. The story of 5 young American spies infiltrated into Nazi occupied Paris during WWII seems both historically accurate and plausible. The narration is remarkably excellent.

My only disappointment was discovering that this was the only work of this genre that the experienced author wrote. I was quicly able to recover from the lost sleep I suffered staying up late to listen.

Favorite book of the year!

I have read 33 books this year, all novels set during WWII, and this is by far my favorite. I couldn’t put it down and got through it in 2 days. This is one that I will read more than once. Best book is have read in a long time!!

Started Off As Historical Fiction, but...

So, the beginning of the book does a fabulous job of character development, laying the foundation for a solid, intricate tale of serious espionage during World War Two. However, somewhere around the halfway mark, it turns into a Harlequin Romance complete with inane conversations, mistakes that would never actually happen, and undertones of forbidden romance, culminating in a happily ever after ending.

It felt like the author got distracted and then had to hurry up and finish for publication. The story line is good, it just felt superficial after a while.

This could also be my perception because I was expecting something like Nightingale! If you are new to historical fiction, it's a great starting point. Not heavy at all.

Read this book, NEVER listen to it

This was an amazing story that I really liked. although you only got to know the characters very high level, the book is fun. It has a good story and you’re itching for more.

BUT the narration is so horrible I almost stopped listening every other day.

The good and the bad

A fascinating story but couldn’t Hachette have found readers who could speak French and German?? The attempts at the languages ruined the recording.

kinda hard to follow at times with everyones names. nick names. and code names. but it was good I recommend it

I thought the narrator's did great with the accents and speaking German and French, I saw where others complained of this. Great historical fiction book. In the beginning I did feel that it was confusing as to who was who but once I got all the characters down, I loved it!

poor narration. The story is compelling and the book worth listening to. But, the multiple speakers break the flow of the story and the astoundingly poor choice of narrators who can't speak French or German (which seems an odd choice given how essential the languages and their characters are to the story) detract further.

If you have a good narrator you get into the story and after awhile you can tell which character is talking without them having to specify every time. So. why would you just jump back and forth between the narrators instead of using them both at the same time and have consistent voices throughout?

The story sounded like it would be really good. I don't want to listen to the narrator but to the characters they bring alive.

A beautiful story of WW2...

An intriguing tale from Paris and WW2... with many hero’s and heroines to admire and root for.