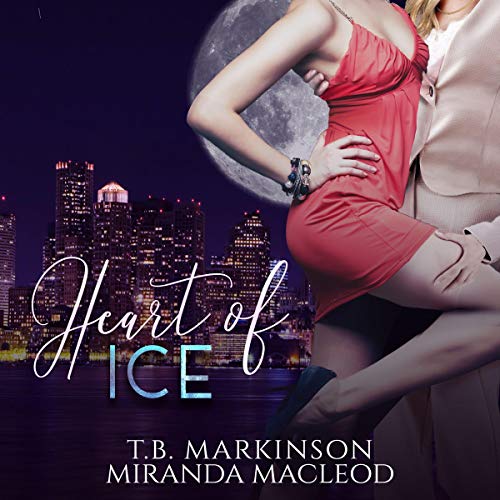 Written by: T. B. Markinson,Miranda MacLeod
Narrated by: Stephanie Murphy
Try for $0.00

Laurie “The Hatchet” Emerson is a ruthless leader in Boston finance who’s rumored to have a block of ice where her heart should be. If only. Recently widowed, Laurie fears she’s broken beyond repair, until a once-in-a-lifetime business deal reignites her passion for work and gives her a shot at proving to the world she still has some life left in her.

Jack Kennedy is a young portfolio manager who aspires to greatness. Unfortunately, she’s so many rungs down the corporate ladder she can’t even scrape up enough money to move out of her mother’s apartment. Her luck changes when her work ethic is finally rewarded with the job opportunity of her dreams.

A blizzard forces their worlds to collide, but what was meant to be a no-strings night of passion becomes more complicated when they both arrive at the office the next morning to discover they each spent the night with the one person in the city who could crush their futures.

Together, they just might hold the keys to everything they’ve ever wanted, but the difference in their ages and positions could spell the end of their careers. Will the ice queen and the protégé find happiness together or lose everything?

What listeners say about Heart of Ice

I received this audiobook in a free giveaway through the publisher’s newsletter. I’m a big fan of TB Markinson. I love her books, many are among some of my faves. I’ve read this one & liked it so I was looking forward to the audible version when I saw I won a free copy.

Narrators can make or break it for me every time.

In this case, it was broken, sorry. I am not fond of Stephanie Murphy’s narration style. Like at all. Actually, I was incredibly disappointed by her being the narrator for Markinson’s entire Woman Lost series; it’s my fave by her & I would’ve loved to have a reliable audio series in my library to replay numerous times over the years. But Murphy just doesn’t do it for me. She ruined Sarah & Maddie for me completely in that series.

Her cadence makes it incredibly hard to listen. She has a pleasant enough voice but she reads sooooooooooooo slow & literally never changes the pitch or tone throughout the entirety of a story. That remained true with this book unfortunately. I really really tried to give it a chance but as always didn’t get past the first 2-3 chapters.

It moves along so slow I can’t seem to get into the book & stay interested more than 5 mins at a time, my brain starts to wander too quickly. There are so many unnecessary long pauses between words & sentences; sometimes I even thought my Audible app had crashed & needed to be restarted but no it was just Murphy taking a 15 second pause between sentences for whatever reason.

Also, I can never tell one character from another when she speaks bc they all sound the same. And I do mean literally all—male, female, young, old, various accents. This is especially awful with Markinson’s books bc she weaves a ton of dialog into her stories & offers such a variety of interesting characters. It’s impossible to follow along when one character is speaking to another. If I have to concentrate that hard it kinda defeats the purpose of an audiobook for me bc it’s supposed to be a relaxing & distracting escape :(

Sorry to rant but I much prefer the styles Lori Prince or Abby Crayden—both are very talented at bringing multiple characters to life & making you feel like your watching a story unfold instead of just listening. Sigh.

Sorry, it really bugged me this time. If the publisher wants their free copy back to give to someone else who does like Stephanie Murphy I would gladly return. Would’ve given this book 5 stars across the board if it were any narrator but her or maybe Keira Grace (who’s the same exact way sigh).

This was a hot ice-queen, workplace, age-gap romance. Some of my favorite tropes. Great story with a great narrator.

I had to struggle to listen to the audiobook! Absolutely awful narrator!! I can't believe that I paid for this! Her boring, sing-song voice killed by mood! And the narrator used the same tone for all characters! I couldn't tell which character was talking!! I really tried to finish the audiobook but gave up after 2 hours! Similar tone for all characters and couldn't separate the f..... characters! So boring!! Also, the book is dull! The ratings are deceitful! Overall 0.5 rating out of 5!!

Age is Just a Number

I absolutely loved this book. The store line was very different and well developed. These authors blended their contributions seamlessly. The narrator was one I didn't know but she was excellent.

Laurie Emerson, AKA, “The Hatchet,” is the Ice Woman of finance. Recovering from the death of her wife and business partners, she’s ready to take back her company. Her encounters with a junior account manager leads to more than she planned while trying to land the biggest account of her career. A great team of authors and a marvelous performance. Recommend.

Well it really have a good start and great ending. I really enjoyed the story. Thanks to both of you 😄

This was a great story and Stephanie did a wonderful job of narration. Read the book loved it but once again the audio adds so much to the enjoyment of the story.

The word ‘ditto’ should never be said in an intimate scene...that sort of sums up the writing. It was not engaging and at points you want to scream at the character who is supposed to be intelligent that she is an idiot. Also continuously calling one character ‘old’ as a joke is just insulting and I really don’t feel it would fly in a caring relationship.

I loved the story. I read the book before listening to the audiobook. Usually, when I do that (read a book before listening to the audiobook) the audiobook makes me like the story even more (as you can guess, I listen to an audiobook of a book I already read only if I really liked the book). However, in this case, that didn't happen. I can't say that the narration was bad, but there was something that just didn't feel right. It's not a bad narration, but in this case I feel that the story is so good it deserved a better narration.

Regarding the story, I loved everything about it. I specially liked the fact that the conflicts were not contrived. I'm always wary of conflicts due to miscommunication, but in this case I can see it totally happening. And I loved the ending, but to avoid spoilers I won't say anything more.