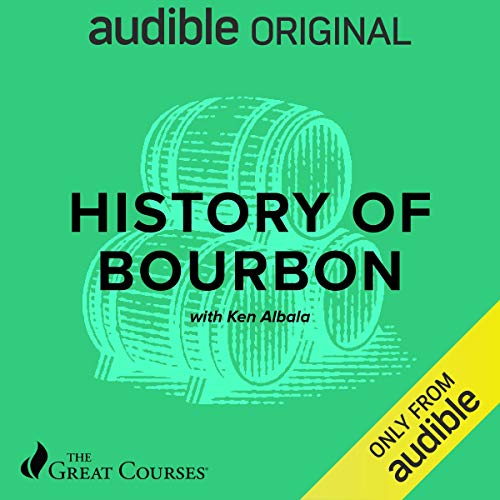 Is bourbon the quintessential American liquor? Bourbon is not just alcohol—the amber-colored drink is deeply ingrained in American culture and tangled in American history. From the early days of raw corn liquor to the myriad distilleries that have proliferated around the country today, bourbon is a symbol of the United States.

This course traces bourbon's entire history, from the 1700s, with Irish, Scottish, and French settlers setting up stills and making distilled spirits in the New World, through today's booming resurgence.

On their tour of bourbon's fascinating, turbulent, and uniquely American evolution, listeners will explore the mysterious origins of the whiskey’s name and meet the men and women who have been championed as its inventors and made it so popular - from Daniel Boone's cousin and Baptist minister Elijah Craig to Jacob Beam and Evan Williams.

In this 10-lecture journey through the story of an undeniably American libation, listeners will:

Join Dr. Ken Albala, a history professor who has written numerous books on food, as he lays out in expert detail the critical role bourbon has played throughout the cultural and political history of the nation.

What listeners say about History of Bourbon

Expected a lot more about bourbon

The title misled me. As an overall description of liquor it’s not bad. But it’s not a “history” of Bourbon.

History of Bourbon? Not so much.

I figured when I ordered this book it would be strictly about the history of bourbon. I couldn't even make it through the second lecture as he kept going on and on about different types of alcohol and time periods not even remotely related to bourbon.

One of my favorite audible originals to date

This course on the history of bourbon was perfect. It was informative, entertaining, just the right length, and very fair and level headed. Bourbon is a topic where you can find all manner of pretentious people as well as the opposite. Albala gave a even and factual look at this industry which has become drunk (ha!) on its own lore. Especially as he worked his way up to the modern day climate, I appreciated perspective given by the historical information. Recommended.

A History that needs to be told!

This was a great introduction to spirits (liquor) world. The past, present and future by someone who has spent a great amount of time researching. He even adds in a few drinking songs for good measure.

Quick lesson on the history of Bourbon and current status

The History of Bourbon is very well written and a fun series of lectures. Well done!

HISTORY OF BOURBON by Professor Ken Albala is superb in addition to being educational. It is likely my favorite of the Audible freebies. The book is presented as a series of short lectures. Albala does a fine job of narrating his own work.

The History of Bourbon is an Hour into the Lecture

The focus on Bourbon really starts in chapter 4 , about an hour in. The audible is lecture style so it includes some tangents and omits some details - if it was a written book.

Excellent History of an American Beverage

Well researched, well written and read course on the hows and why’s of bourbon even if you aren’t a fan.

History in a glass

Picked this up and was pleasantly enjoyed the history of alcohol (in the general sense) before focusing in on the topic of bourbon. It’s a good way to introduce people of how the beverage is made and the difference between the “sour mesh” and “sweet mesh” and explains how blended whiskeys are made. It’s worth having a notebook and pen on hand to jot down notes while enjoying a nice bourbon or whiskey.

Great for a road trip.

The historical reference in the first 2 chapters are great. I want to go to Heaven Hill and do the tour.