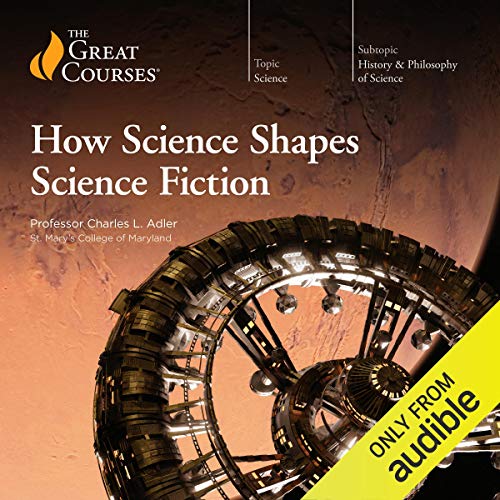 Science fiction can often seem to be pure imaginative fantasy with only the trappings of science. But many authors are more fluent in real science than many readers and viewers may realize. With the success our smaller Audible Original course on this subject, we thought it was time to extend the topic and present a more expansive look at the fascinating intersection of fiction and reality, which is what we have set out to do with How Science Shapes Science Fiction.

Professor Charles L. Adler of St. Mary’s College of Maryland was the perfect choice for this subject, as he is both a longtime science-fiction fan and a real-world scientist. Professor Adler’s talent for using literature to shine a light on science - both the accurate and not-so-accurate versions employed by creators, spanning two centuries - makes this course a great survey for fans of both science fact and science fiction.

What listeners say about How Science Shapes Science Fiction

Such interesting ideas. I can’t wait to check out some of the books that were recommended.

A+ Science behind Sci-Fi lecture series

FYI I listed the 24 lectures/ chapter titles at the end of my review. They're on the PDF & Great Courses website, but Audible's chapters are not labeled. I've gotten 3 of these "science of sci-fi" & "how sci-fi works" books from Audible. This book from Adler is the best one for what I wanted. The author/ lecturer is enthusiastic & knowledgeable. He covers a wide range of sci-fi topics as well as scientific disciplines, & he delivers the material like a college professor addressing adults. The much shorter Audible Original (which I did not like) was very basic, child-oriented recitations of physics & astronomy principles. The other Great Courses sci-fi lectures are a survey of sci-fi literature (which wasn't useful to me) for an audience that's seeking book summaries/ genre history rather than science. If you are interested in the science of sci-fi, THIS book of lectures by Adler is your best choice currently on Audible.

I should mention that I'm a neuroscientist patent attorney working in biotech, so my review is from the perspective of a scientist rather than a layperson. My field involves neurobiology, biochemistry, electrical engineering & nanotechnology. I'm certainly no expert in physics or astronomy, but I took those college courses & my general scientific knowledge is fairly robust as required for patent practice. That might make it difficult for me to judge how laypersons will perceive this book.

In my opinion, Adler does a great job of making the science interesting and explaining the concepts in a way that most people could understand. Where Adler's book really shines is the breadth of its coverage. The range stretches across speculative fiction from Star Trek, Star Wars & Avatar to Doctor Who, X-Files & The Avengers to Game of Thrones to Neuromancer & Leviathan. It's all here- fantasy, superheroes, space exploration, cyberpunk & even steampunk. He also covers the classics of Verne, Clarke, Heinlein, & Asimov.

Adler is equally ambitious in the breadth of the science he discusses: rockets, lasers, space colonies, time travel, space warfare, teleportation, planetary ecology & AI. Adler even briefly mentions neuroscience & telepathy. To my pleasant surprise, unlike 99% of sci-fi lecturers with a physics/ engineering background, Adler does NOT conflate "thoughts" with neural oscillations (electrochemical fluctuations among groups of neural ensembles in the cerebral cortex that we measure as brainwaves on EEG). This is in contrast to Elon Musk, whose Neuralink project makes most of us cringe. Our ability to measure basic electrochemical data about emotional states & to map motor control in the prefrontal cortex so that monkeys can move a machine with their brains DO NOT correlate with measuring, digitizing & manipulating human COGNITION (i.e., thinking). Irresponsible futurists should stop pretending near-term neuroscience will read, record & change your thoughts. That upsets the public, spawns conspiracy theories, detracts from real research & actually threatens funding sources. Reputable neuroscientists agree such technology is many decades away & will be quite different than ESP. It's unlikely that memories, reasoning & cognition will ever be measured precisely. These are complex processes that differ across people & don't involve fixed data points.

Adler is at his best when discussing rockets, travel, & astronomy. This isn't surprising, since he's a physics professor. As a presenter, Adler is among the best I've heard in the Great Courses. His delivery is as good as most audio book readers. As a professor, he possesses an important quality that's often lacking in readers of nonfiction audio books: an understanding of the material. This makes a big difference. The pace is slow enough that non-native English speakers should be able to follow, & of course you can speed it up or slow it down in your audio playback as desired.

More detailed than I thought

This audiobook is a detailed discussion about main questions, solutions and knowledge of writers and new ideas from the perspective of main sci-fi books creation era.

I am going to listen it again

loses something without the visual

Listening to him trying to explain equations was a bit frustrating, but overall this was pretty excellent. Occasionally I was surprised by which stories he DIDN'T discuss, but the ones that are included were pretty good examples.

In 24 concise and well-delivered lectures, he explores at least that many areas of science and how they are reflected in great SF, with many on-target examples. I'm writing my 4th SF novel, and doing a page-one rewrite on #3 SF novel (published in 2093 but out of print since 2012) and this Great Course is helping me to refine the story and the science.

Highly recommended for serious SF fans, lovers of non-fiction popular works on current and emerging science, and anyone who wants to see how the universe really works.

I'm going to revisit this course with a notebook in hand to write down the names and SF book/movie/TV titles I need to read or watch, either again or for the first time, as well as works by cutting-edge scientists/authors for my reading/watching pleasure. Great Course indeed!

I loved Adler's enthusiasm for the topic. learned a lot and enjoyed reading the novels mentioned.

For GC lectures, there are better takes on sci Fi. This one is fun though.