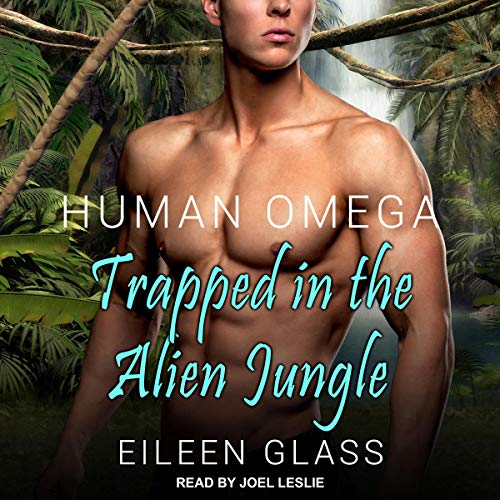 Written by: Eileen Glass
Narrated by: Joel Leslie
Try for $0.00

Carter isn't sure what to call his two alien protectors. Friends? Boyfriends? Mates?

Or merely indiscriminate lovers with sexy purrs and tangling tails?

He would be lost without them, he knows that. When their home is invaded by a dangerous new kind of alien slaver, they strike out into the jungle. He depends on them for food, protection, a direction to walk in. He's helpless even for shelter and warmth.

Thankfully, his alien lovers seem devoted, but why? Carter wishes he knew their names or anything else. Like whether the attachment he's feeling is returned.

With aliens, you can't make assumptions.

Wouldn't it be nice if he could just ask?

What listeners say about Human Omega: Trapped in the Alien Jungle

Highly intelligent and extremely entertaining writing with a perfect narrator. I definitely recommend this audiobook!

This story gives me all the feels!

I am really enjoying this series and can not wait to listen to the next book. The narrator does a fantastic job with all the different characters.

To explain the title a little, after having listened to several MPreg M/M stories, I have pretty much determined that I am not a fan of the genre. As a reviewer on another book has observed, they tend to be M/F romance stories with the female gender (but not attitudes and "frailties") swapped to a (feminine) male. However, this series, being placed on a SciFi theme, intrigued me enough to chance it (I like SciFi ;-) , and I am glad that I did. I also liked that the "story" had some meat to it (no pun intended) in that there actually was one separate from the "romance" part of it.

Another saving grace for it was that the MPreg part, although strongly hinted at, did not manifest itself (at least so far). I am really hoping that, if this series continues, it never does as while I can suspend disbelief on a couple of fronts (e.g., Space, ETs, tech, etc.), I would find it extremely difficult to believe that all parties are biologically compatible. So please Ms. Glass, do not go there. The *expectation* that it might be possible is fine for Seil and his people to have, but if you somehow make it biologically possible for a human male to give birth on that world, you will loose a fan.

This now brings me to the one, sort of, negative comment that I have, that being the narration. My first introduction to Mr. Leslie was a story that involved a man learning that he was accidentally switched at birth and the family that he was raised with was, well unloving, is about as kind a summary that I can make. In such a story, a narrator who's voice contained a slight tremor, as though he might break down a cry at any moment, was appropriate, if a little tiring and annoying after several hours. However after listening to several other books narrated by him, I have come to the conclusion that this is an ingrained quality of his voice, and one that I unfortunately really do not care for. While I will not dismiss a book read by him solely on that basis, I will think twice about purchasing one that he narrates. So I was tempted to pass this one over, but the storyline intrigued me. That being said, I have to admit that he did a fairly good job here, either that or I am now becoming more numb to those qualities that annoyed me earlier ;-) So, Mr. Leslie, I really do like the timber of your voice and I think, in general, you do a good job at different character voices but, if you could loose that trembling, almost going to cry, aspect you would have a solid fan.

Even better than the first book!

I loved the first book (and gave a more detailed review there so I'm just gushing here), and bought this one on pre-order because of how excited I was for it. And let me tell you, Eileen Glass and Joel Leslie did not disappoint. It was an amazing listen and added more wonderfulness to the story, characters, and setting. I was left both delighted at just how much I LOVED it, and wilting at the fact I have to wait for who knows how long for the next one.

If you liked the first book, you'll probably like this one just as much, if not more. I listened to it in a day, and it's over 12 hours long so, yes, I was listening All. Day. Long. Even in the bathroom. And if I could've taken it into the shower with me, I would have. I'm also proud to say I was the first all 5-star rating on this book (though couldn't write a review until later).

You'll love this book so stop hesitating and just buy it!

Joel Leslie is now my internal voice for Carter, Siel, Pykh, and Auk - it was so funny how he pronounced some of the non-translated brain bot words. This book is amazing - definitely not a series to miss.

Even better than the first book

We continue to follow the struggles and challenges that Pykh, Siel and Carter face as they escape from their captivity and learn more about each other and the planet they are surviving in. The gradual building of the aliens culture and history is masterfully done, but it's the characters' loyalty and devotion to each other (and their sense of humor, especially Carter's) that are the winning qualities of the series. Looking forward for a sequel. Especially since the book ends in cliff hanger.
The narrator continues to do excellent job, which was especially challenging here due to the mis-translations sounds.

A Great Second Chapter In This Story!

I love all the voices in this story! They are so velvety to my ears! There is lots of adventure as Carter, Siel, and Pykh continue to escape from the bugs and meet up with members of Siel's people. The ending once all three of them are safe and together is so sweet and romantic! There's lots of bits of humor throughout. The one thing that was a little bothersome was the exploration of the language where the pronunciation of untranslated words was a little hard on my ears, but it was just a minor issue. If you enjoy alien and human adventure romances, I'd highly recommend this!

This is the Gordon Ramsay of food and Jessica Préalpato of pastries. Wrap in platinum tethered material. Topped with an intricately woven diamond studded silk bow.

Think Harry Potter meets a mesh of Star Trek, Texas Chainsaw Massacre and Invaders with an added boom of LGBTQ romance. If you're going to read one. I would advised to read all three. And read them back to back and in order.

Man, this book was all about the tears for Pykh, he broke my heart! I felt so sad for him, he was doing what he could to care for his mates, but no one appreciated it. He was so out of his element, I just wanted to protect him.
I'm ready for book 3, to see where these guys go from here!

In this, the second in the series of how a human falls in love with two kitties and what happens to them, we had a non mc pov which drove me crazy. Then we got to the end and it made more sense but could have waited until the next book. As one can tell, I got really invested in the story.

I did not enjoy the separation that took up way too much of the book, I wanted more cuddle time.

Joel did a great job with the narration, can't wait until the next story.

the ending is a cliffhanger? just I hope the story continues. love that there's communication issues with alien races

I love this book and this series. Joel Leslie, as always does an amazing performance and provides distinct and well thought out voices for every character. I HIGHLY recommend this series!