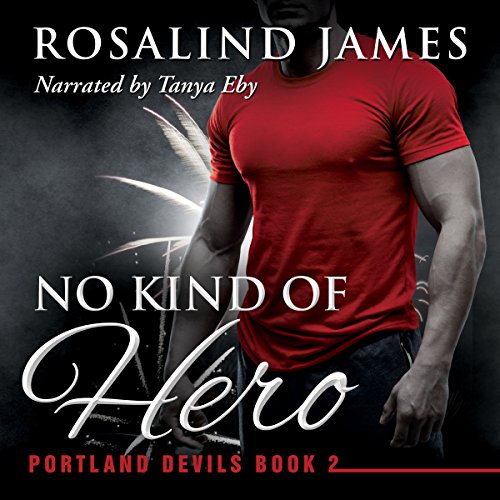 No Kind of Hero

Written by: Rosalind James
Narrated by: Tanya Eby
Try for $0.00

Some men are hard to quit.

Beth Schaefer isn't just on the partnership track at her Portland law firm, she's in the lead. Unfortunately, she's about to fall at the finish line. When she makes a list of breakdown destinations, she can't even manage to choose between them. Which means she has to come home to Wild Horse, Idaho, for her breakdown. She has exactly 18.5 days of accumulated vacation time to devote to it.

Evan O'Donnell's girlfriend took off when their baby girl was a month old, and that's just fine by him. His daughter Gracie is all the female companionship he needs, thank you very much. Beth Schaefer's not even in the running. Eight years ago, her parents convinced her to give him up, and he's had enough of snobs and women who don't stick. Evan's a blue-collar guy from his too-broad shoulders to his scuffed work boots, and he's nobody's white knight, and nobody's hero. Not anymore.

But what if Beth isn't the only one who needs saving?

What listeners say about No Kind of Hero

Several years ago Beth fell in love with a guy but she had her life goals...besides, her parents didn’t approve of the help with their daughter. Now she’s burnt out from working relentlessly to make partner at a law firm and is back home to rest for a few weeks. Beth doesn’t count on meeting the only man that she’s ever loved. Single dad, Evan, is working had at providing for his daughter, while single handedly raising the newborn. Just when he thinks his life is on track, here comes the first woman who broke him...Beth...and he can’t ignore the feelings. Sweet story.

this story is dragging and the heroine is beyond annoying. the 1st book in this series was much better. 3 hours in and I have to call it quits. so boring. the narrator is cool and the hero is awesome.

Evan is the strong and silent type. Beth is a mixed up almost-partner lawyer. They had a history together nearly a decade ago and Beth ran out on it to be the good little daughter and go to college and become a lawyer in the big city. Evan got injured out of a pro football career, but liked his small town home better anyway. He is now partners in a painting company and busy as the small town has added a fancy resort. He's also a new single father whose partner ran out on him and their adorable baby, Gracie. Evan's down to earth while Beth is busy trying to figure out what on earth she has been doing working lawyer hours in the big city with no apparent life. (Oh, what we think we want when we start our careers and how they really turn out. . . that realism is always a place where Rosalind James shines!)

I found Beth hard to like, especially at first. Admirable, yes, but not so likeable because who is she, really? This story has to move fast because she's on a short timetable, but that works because of their past history and the small town make it hard not to know what someone is like. Beth eventually peels off the layers of herself that don't fit and does become more authentic. She was really a hometown girl at heart, too.

She and Evan have to get past their past and figure out if they have a future together while also juggling career aspirations plus assorted family members.

I enjoyed Tanya Eby's reading, but liked her female voices best. She did a good Beth and made fun baby noises for Gracie. :)

I received a free copy of this audio book in exchange for an honest review. I already had the ebook. I was not compensated for my review, and I was not required to write a positive review. The opinion expressed here is my own.

I enjoyed this one alitte more than the first. The characters had so much emotions and the storyline was adventurous. Thanks

Loved how book 2 connected from book 1. I was happy to read the approval of her parents. ready to jump in next book.

Excellent story both loving and creative

This book is consistent with Rosalind James' other books with a unique well- thought out plot, excellent characters and superb writing. I highly recommend it.

The narrator was great. The story could of been shorter. I had to skip a couple of times.

I loved this series glad it was audio because I wouldn't have gotten anything done if it where paperback.

This is the 2nd book of the Portland Devils, and it’s slow and boring. The first book was great but not so much with this one.

I liked the 2nd book better then the first this book had twists and turns all the way to the last second. I normally can guess guess what's going to happen in a movie or a book but this one kept throwing me it was good till the end.