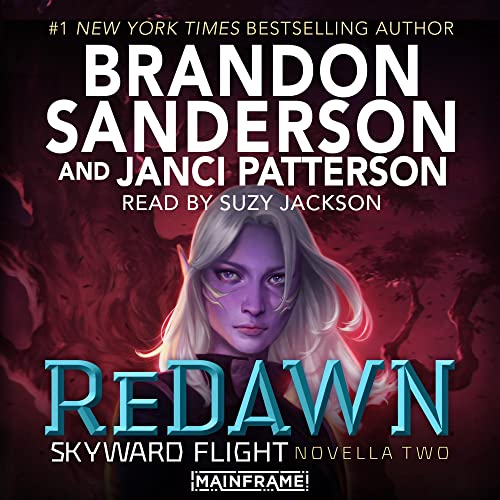 From number one best-selling author Brandon Sanderson and Janci Patterson comes the second of three Skyward series novellas, each told from the perspective of a different member of the team back on Detritus. Listen to Alanik's story between Starsight and Cytonic.

“Don’t trust their lies. Don’t trust their false peace.” That is the warning that Alanik of the planet ReDawn gave the human pilot Spensa after Alanik’s ship crash-landed on Detritus. While accepting an invitation to meet with her people’s enemy, the Galactic Superiority, Alanik heard Spensa’s cry for help across the vastness of space, and she used her cytonic powers to hyperjump her ship to the source of that cry. What she found there was a shock - a whole planet of free humans fighting against the Superiority. Were they the allies her people desperately needed?

When she recovered from her injuries and met the friendly humans Jorgen and FM of Skyward Flight, she found that her warning to Spensa had gone unheeded by the government of Detritus, and they were considering a peace overture from the Superiority. Now having returned to ReDawn, Alanik is dismayed to learn that her own people are falling into the exact same trap.

The faction in ReDawn’s government that wants to appease the Superiority has gained the upper hand. With Alanik’s mentor, Renakin captured, she has no one to turn to but Jorgen, FM, and their friend Rig. An ancient technology may have the power to save both of their planets from disaster, but can they discover its secrets before it’s too late?

A Kirkus Reviews Best Book of the Year

"Startling revelations and stakes-raising implications...Sanderson plainly had a ball with this nonstop, highflying opener, and readers will too." (Kirkus Reviews, starred review)

"With this action-packed trilogy opener, Sanderson offers up a resourceful, fearless heroine and a memorable cast." (Publishers Weekly, starred review)

"It is impossible to turn the pages fast enough." (Booklist)

What listeners say about ReDawn

These two novellas were such a great adition to the story and a great way to hype up while waiting for Cytonic.
I can't wait for the third one to come out and check back in with the crew.

Absolutely floored by the newest addition to the Skyward series. Action packed, world building, and absolutely essential to the overall story. I didn't believe I could be looking forward to the release of book 3, but after this, my anticipation is even higher.

Overall it's okay. I understand why Brandon is having someone else do these novellas. I feel like I need to listen to them to stay current on Brandon's work but I'm not a big fan of Janci Patterson writing style. if I find out these are not necessary reads/listens after cytonic comes out I will likely skip them in the future.

although I was skeptical of the novellas, they are quickly becoming my favorite part of this series. expertly done narration make this a breeze to listen to. the story was exciting and new. loved every minute of it and look forward to both the 3rd book in the series, and the 3rd novella!

As an author myself, Brandon Sanderson has been and always will be my favorite author! Janci Patterson may be another!

Like the entire Skyward series, this one was amazing!

Another fantastic book in the Skyward series!

I am really enjoying these. it's so great to get the other stories going on with the rest of the Skyward flight.

I really like that Brandon was not the main author, he has too many things to write. doing it this way allows him to get to more cosmer things

After reading some other reviews I was hesitant going into this Novella, but it truly is quality. This builds on the universe of the series and is absolutely essential to it. The writing and narration is fabulous, and fits perfectly with what the series is.

Well worth it but sad

I loved the narrator....and loved the story it really gets you to know everyone. The ending was sad but really got you wanting more.

that was quite intense! im excited to read the next book and see how this plays out.