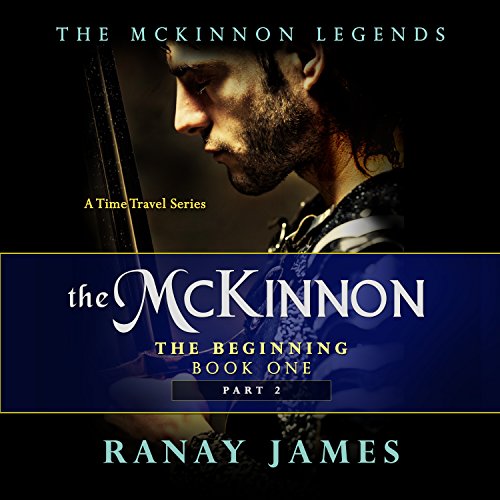 Written by: Ranay James
Narrated by: Cait Frizzell
Try for $0.00

"I'll come back, O'Brian, and when I do, you'll wish you'd never come out of the womb." (Nic McKinnon, seventh Duke of Seabridge, to his jailer.) Strong words coming from a man still in chains.

Morgan McKinnon, seventh Duchess of Seabridge, refuses to believe that her husband is dead, regardless of the facts that tell her otherwise. Deep down she knows Nic is still alive, and that her uncle is somehow behind the betrayal of Nic's troops in Ireland where he was stationed by King Henry's command.

Without a single word from Nic or his troops for months, his younger brother Cullen and Morgan are off to Ireland to find any clue as to Nic's whereabouts. They don't find him, but they do hear rumors that a man fitting Nic's description has run away with the village's healer, Reagan O'Riley.

Can it be true? Morgan doesn't know.

What she does know is that now, more than ever, she is convinced of her uncle Lester's involvement, and he has proven he will stop at nothing, not even murder, to maintain control of Seabridge.

Is Nic to be Brentwood's next victim? Morgan prays it isn't so.

Now the stage is set for the battle to secure Morgan's birthright: the rich and lavishly appointed Seabridge Castle. Currently the prosperous dukedom is in the hands of the lecherous Lord Brentwood who seized control after Morgan's family was killed in a fatal fire.

Nic must fight to regain what Brentwood never had the right to possess. Will he succeed? Or will true evil prevail? There can be only one victor.

What listeners say about The Beginning Part 2

I just couldn't get into the Narrator

I loved the story, but wished for different narrator. Her voice for Nic was flat no emotion and IMO didn't fit the character.