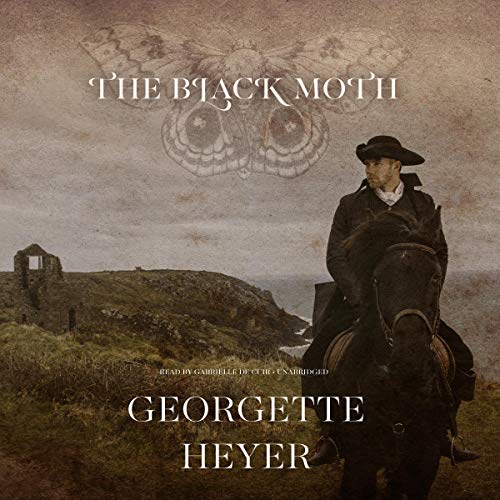 Based on a story she had written for her brother and published when she was 19 years old, The Black Moth is set during the Georgian era in the 1750s and follows Lord Jack Carstares, the eldest son of the Earl of Wyncham. Six years ago, Jack took the blame when his younger brother Richard cheated at cards. Jack consequently faced social exile and fled England for the European continent. He has now secretly returned, robbing carriages as a highwayman.

One day, he rescues Miss Diana Beauleigh when she is almost abducted by the Duke of Andover. Jack and Diana fall in love, but his troubled past and current profession threaten their happiness.

In a contemporary review published in 1921, the Times Literary Supplement deemed the protagonist Jack a “fascinating hero of romance” and added that the novel was “a well-filled story which keeps the reader pleased”.

What listeners say about The Black Moth

This is how a Heyer book ought to be read

I will be looking for more books read by this person. She was quite talented. And I think we know that Heyer gives people a challenge with voices!

As for the book itself, this is probably my 4th time going through the book, but my first listen. The mix of humor, historical accuracy, and interesting characters keeps me coming back for more Georgette Heyer. Couldn't recommend this book (her first published) higher.

love this author so much!! the reader did a very creditable job with tone and emphasis.

Heyer's writing and characters are absolutely delightful. I love period pieces (historical romances) and thanks to the author's witty style, I felt as though I were right there! It's a great historical novel. Especially as I now see it was written when she was a teenager!?!?! The narrator nailed the tone and the characters. Accents, men, women, action scenes ... it's all there. I hope this narrator does more Heyer; I'd certainly listen. Such fun!

GH's writing seems stronger in her later works. I also didn't take to be this reader; sped up the audio to > 1.5 times the original rate.