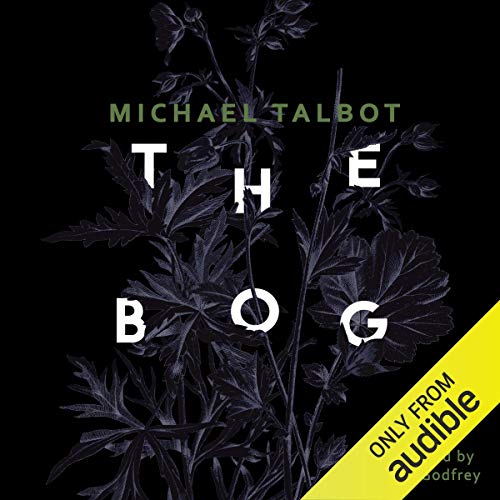 Hovern Bog. People live in terror of it - especially the residents of Fenchurch St. Jude, the little village located at its edge. They think of it as a living being. They've seen it reach out with sinewy tentacles... to take, entangle, and digest.

When 2,000-year-old bodies are recovered from the bog, perfectly preserved, it is the discovery of a lifetime for archaeologist David Macauley. But close examination of the corpses reveals a curious fact: all were cruelly, mysteriously murdered, gnawed to death by some unimaginable creature. Soon it becomes apparent that whatever tortured and killed the bodies from ancient times still roams the bog, and no one in Fenchurch St. Jude - especially David and his family - is safe.

In The Bog (1986), Michael Talbot (1953-1992), author of the vampire classic The Delicate Dependency and the chilling haunted house novel Night Things, delivers an exciting mix of science and the supernatural that will keep listeners guessing until the horrific climax.

"One of the better horror novels.... odd and risky mingling of pure science with fairy lore and gnashed bodies.... terrific." - Kirkus Reviews

What listeners say about The Bog

This book was quite different from anything that I have read before but I have to say I quite enjoyed it for that reason. It was fantasy but not in your typical ways and that was also neat. Give it a try for something new.

An engaging and unique book.

I sincerely enjoyed this book and finished it in a day. The author's incorporation of history was brilliant and a treat to read. The story was dark, authentic, and hard to put down. The beginning immediately drew me in and the core of the story was intriguing. It's definitely a great read!

This book's story line is ridiculous and is devoid of any thrills and chills that one expects from a horror novel. I have read many books in the genre that build to supernatural elements that are absolutely hair-raising because the authors know how to make them believable and threatening. Sadly, Michael Talbot does not have such ability: It's as if ideas would pop into his head that he would automatically include in the plot... then forget he did so. This left me yawning and bewildered by such superfluous inclusions. But worse, the characters in this book are so stiff and emotionally stilted it actually made me feel sorry for their creator. With this in mind, I advise my fellow listeners to not waste their money on "The Bog" and I advise Mr. Talbot to not - I repeat to NOT - quit his day job.

From what I see on Amazon, this story was originally published in the mid-1980s. Thinking back to horror films and novels that I passed the time with during the late 70s and 80s, listening to this story brought me right back to that time.

I give the story 3.75 stars because, like some other reviewers, the plot veered into directions that I thought were... unusual. Reading the book description, I knew that the theme would be supernatural/paranormal. I really, really enjoyed the build-up during the first half of the story. I'm a faculty member at a post-secondary education institution, and the dialogue and personal interactions (e.g., between David and his grad student) seemed authentic to me. I liked how the various tensions became apparent and I liked the gothic mystery of the local aristocrat and his companion, the missing dog, the close-minded locals, the strange housekeeper, and a bog that can swallow a person who takes a misstep.

I think that where things bogged down (argh) a bit for me was because there were perhaps too many different supernatural elements in the plot line, which strained my suspension of disbelief. I don't want to go into spoiler territory, so I won't list all of the supernatural plot/character elements... but there are definitely a few of them!

One of the main reasons why I'm happy to give this story 3.75 stars is because I have a soft spot in my heart for campy horror (such as the Hammer films) and for some reason this story reminded me of the 1992 'Turn of the Screw' film (with Patsy Kensit) or 1976's 'Omen' in terms of atmosphere and visuals. The Bog turned a bit surreal in the second half, but that's okay because the menacing atmosphere in the first half of the story had me hooked. I'm not a professional film or book critic; I enjoyed the story because of how it fit within my personal warm memories of horror in the 70s and early/mid 80s, so it scores nostalgia-points for me.

The other reason why I reduced the rating a bit was because of a few minor details that seemed to jar me out of my emotionally tense groove. With this genre, I relish the thought of being immersed emotionally as the story progresses and I'm willing to suspend disbelief. However, it's often the banal little details that knock me out of my stupor and say to myself, "Meh. This is fake." For this story, the details that knocked me out of that stupor were related to David's eyesight while in the bog at night. There were a few times where it seemed like he had super-human vision (e.g., being able to see a creature's nictitating eye membrane blink...from a distance... behind the bushes... in a bog... at night). He also was really good at finding a piece of jewelry that had been flung out a window at night. Little details like that are like a hypnotist snapping his fingers and waking the subject up. Weird, but true.

As for the narration, I thought it was absolutely great. Matt Godfrey was an excellent choice for this story. The only reason why I took a star off for narration was because I thought that his voice for the grad student was a wee bit too diffident for my taste. I'd most definitely listen to a Matt Godfrey-narrated horror story again in the future.

Starts fine then jumps the shark.

When the book first starts it seems it might be in the vein of "Relic" by Douglas Preston and Lincoln Child but it soon spiraled into an unsophisticated and campy mess. I like campy but this was just ridiculous. I did like the performance. It was the only thing that helped me get through it.

I only got about two thirds of the way through this story. The performance was lovely, and well paced but the story was lacking. I like stories with monsters, but not when they’re revealed in the middle of the damn story. It held no appeal for me after I found out what was behind the terror. The description of the setting and the characters was quite nice, although.

Overall I felt like I ordered a decadent meal at a nice restaurant but got a McDonald’s sandwich.

The book was repackaged in 2017, but originally published in 1986. This explained the specific writing style and why a few elements felt dated. The author also used ly words – exhausted-ly, caressing-ly, etc. – to the point of distraction. That said, it is a well written and researched book. The story goes in crazy, wild directions. Most of these twists I saw coming, a few I did not. The hero is not flawless, which I liked. A flaw that was most unfortunate is the pacing. In the beginning, and middle it’s like a modern Gothic horror story, which is good, and is paced according-ly. But, as the climax builds, the pace does not quicken. I did finish the book, wanting to know how it would end, so it is written compelling-ly. But the story reveals did leave me feeling that this was a fun, but uneven experience.

The Bog is the kind of story that I would recommend to anyone that enjoys a good deal of histrofiction (patent pending ;o). I loved the archeological science, the historical bits, the way history was altered, the fantastical, and emotional parts of the book. I could easily imagine myself in this area being creeped out by the locals. It is tricky playing with such powerful characters, but Michael Talbot did a great job of balancing the respective aspects of light and dark so that even thought the story is wondrous, it didn't feel forced. I really enjoyed the way the story played out and almost all of the ending. And, as always, I thought Matt Godfrey killed it with his narration. Good job, guys.

This book was given to me for free at my request for my voluntary and unbiased review.

The narrator is good. The story starts interesting, then becomes a mumble jumble of fantasy mixed with disgusting descriptions that were totally unnecessary. Not worth listening to.

I found this book while browsing the horror section. This is not a horror story but more fantasy including wizards, demons and magic. Not to my taste. I returned it.

'The Bog' is a story I can't quite get out of my mind, though I've listened to several since. A mix of science, magic and monsters, this story is truly unique. Every time I thought I knew where it was going, it took a hard turn in another direction - an occurrence that is both rare and satisfying for me. Though it was somewhat of a slow burn, I found the characters and the mystery aspect to be incredibly juicy and I was dying to discover the 'secret' throughout. I will say that the first half was better than the second half but I would still recommend this book to anyone who enjoys a monster mystery. Matt Godfrey delivers a stellar performance and Talbot puts together a tight, interesting, and fun horror story!

I really enjoyed the start of the book and thought it was headed to a great buildup of a creature feature style book. Didn't really go that route, more magic and wizardry than I prefer but was still a good story. Wouldn't call it horror at all but I assume for the time that this came out it was probably fairly scary. The start was more thriller and suspense with a
I have to say David started out in my mind as a jackass. Didn't like the type of father he was, dog owner, or husband really. Was actually pleased with the writing such that it could make me hate the main character. Although as the story progressed I sympathized with him more and began to root for him as opposed to just the rest of his family.
Matt Godfrey does a great job narrating. His voices are great for the characters and I'm sure my desire to keep listening to one more chapter is mainly owed to him.

A pretty good tale about a Leviathan sort of monster that roams a bog where an archaeologist found a well-preserved body from Roman times. It has some creative plot twists, but is, for my taste, a little saccharine in its character development and family relationships. Entertaining, and well presented.