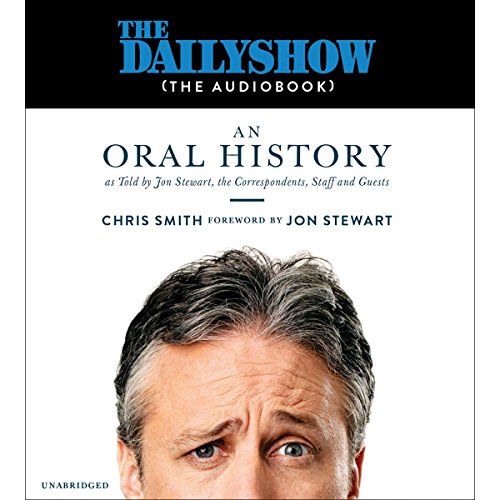 The Daily Show (the AudioBook)

The complete uncensored history of the award-winning The Daily Show with Jon Stewart, as told by its correspondents, writers, and host.

For almost 17 years, The Daily Show with Jon Stewart brilliantly redefined the borders between television comedy, political satire, and opinionated news coverage. It launched the careers of some of today's most significant comedians, highlighted the hypocrisies of the powerful, and garnered 23 Emmys. Now the show's behind-the-scenes gags, controversies, and camaraderie are chronicled by the players themselves, from legendary host Jon Stewart to the star cast members and writers - including Samantha Bee, Stephen Colbert, John Oliver, Steve Carell, Lewis Black, Jessica Williams, John Hodgman, and Larry Wilmore - plus some of The Daily Show's most prominent guests and adversaries: John and Cindy McCain, Glenn Beck, Tucker Carlson, and many more.

This oral history takes the listener behind the curtain for all the show's highlights, from its origins as Comedy Central's underdog late-night program hosted by Craig Kilborn to Jon Stewart's long reign to Trevor Noah's succession, rising from a scrappy jester in the 24-hour political news cycle to become part of the beating heart of politics - a trusted source for not only comedy but also commentary, with a reputation for calling bullshit and an ability to effect real change in the world.

Through years of incisive election coverage, Jon Stewart's emotional monologue in the wake of 9/11, his infamous confrontation on Crossfire, passionate debates with President Obama and Hillary Clinton, feuds with Bill O'Reilly and Fox, the Indecisions, Mess O'Potamia, and provocative takes on Wall Street and racism, The Daily Show has been a cultural touchstone. Now, for the first time, the people behind the show's seminal moments come together to share their memories of the last-minute rewrites, improvisations, pranks, romances, blowups, and moments of Zen both on and off the set of one of America's most groundbreaking shows.

What listeners say about The Daily Show (the AudioBook)

Weird choice for an audiobook

I eventually got used to the way this book was structured, but it was really hard to listen to it at first. The problem is that it is not one continuous narrative. It is a whole bunch of people, including John and Steven and every correspondent and writer and producer that has ever worked at the show. So when you are listening to the narrative, it is constantly interrupted by the reader saying the full name of the person who they are about to speak for

Not narrated by the interviewees

This book is odd. Instead of using the audio from the interviews of the Daily Show staff, the interviews were written down and read by a cast of voice actors. This audio book is like listening to a weird Daily Show cover band.

Moreover, the voice actors don't always do a good job of communicating sarcasm, and names are frequently mispronounced. For example, Moe Rocca is constantly referred to as Moe Rowca.

The book itself is a great behind the scenes look, but the production of the audio books was bizarre.

Good Book - Wish Jon would have read for it.

Would you consider the audio edition of The Daily Show (the AudioBook) to be better than the print version?

No - the narrators performed fine BUT it would have been MUCH better if some (Jon in particular) of the folks featured could have narrated their parts, in their voice. I was longing to hear Jon and Stephen and Steven and Sam (etc.) speak for themselves. I understand that would have added incredible complexity to the audio version of the book but this is the first case I have had with an audio book where it would have made a BIG difference.

What was one of the most memorable moments of The Daily Show (the AudioBook)?

Hearing from some of the critics of the program - like Glenn Beck and Tucker Carlson.

The storyline and arc of the narrative was great - well done editing!

Would you consider the audio edition of The Daily Show (the AudioBook) to be better than the print version?

Many moments in the audiobook are actual scenes from the show. Now, sure, I understand that they probably tried - but couldn't - get the audio rights to play the clips. But the way it is handled is not only done poorly, it completely ruins any sense of comic timing or enjoyment of the material. I find myself wincing every time.

When there's a skit, the producers decided to let the worlds. most. precise. and. slowest. talking. narrator. read. the. name. each. time.

It's jarring, pointless and the antithesis of what anybody who likes fast-moving, intelligent comedy (ie: fans of the Daily Show) would enjoy.

I love the subject and I'm an avid consumer of audiobooks, but this one has a negative enjoyment factor in it's audio book form.

Listening to this book was like having a drink with a best friend you haven't seen in years. Well structured and great insight to a great show that changed our society for the better.

A view inside the Daily Show Machine

An insightful examination of The Daily Show under Jon Stewart's leadership. For 16 years Jon helmed one of the most poignant satires on TV, but he also helped Americans realize that it is their responsibility to question corporations and politicians and hold them accountable. My only wish is that Jon helmed the show for 2 more years. Maybe then the White House would have a different occupant!!

How respect can great an environment for great work

I've had the pleasure and opportunity to work with groups across the world, and while Jon and the team who out this terrific work together might not have meant it to be this way, this work stands out to me to be a heartfelt story of the struggle to create an environment for learning, growing, and having fun along the way. That it created some of the best moments in our cultural history and developed the talents of so many performers, writers, and back office staff is the icing on what I always saw to be a delicious cake.

For Die-Hards and Left-of-Center Uninitiated

First, the narrators. I just had to ding them for the fact that they are NOT the individuals--Jon Stewart, the many Correspondents, themselves. Sooo very disappointing. But what can you do? They do okay jobs.
What's fun are the many stories I remember from watching the show, hilarious highlights... as performed by narrators. Plus, here we get what happened behind the stage lights, and some of it's not so nice. Interesting.
If you didn't get a chance to see the show all that much, you'll appreciate this. If you saw the show and want to reminisce, you'll appreciate this. If you're open-minded right-of-center? Heck, you'd probably appreciate most of this.
It was nice to revisit the gang

amazing backstory to an amazing TV show and comedian that became for my generation a cultural icon and defender of truth. it's begging to be translated into a documentary for TV with the multiple interviews and voices contributing.

I enjoy oral history books. I like that they went all the way through, touching on the Kilborn era, obviously focusing on the Stewart era and then just into the Noah era. Wish they'd gotten Kilborn's interview though.

So many great memories I've had watching this show were highlighted, enjoyable trip down memory lane. Especially "Even Steven"!