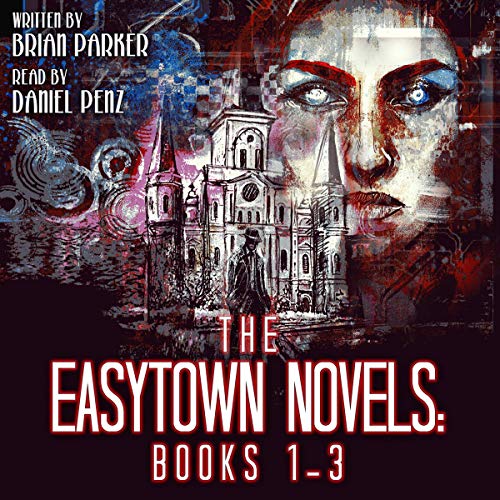 The Easytown Novels create a frighteningly real near future world beset by climate change, social depravity, moral ambiguity, and corporate greed. Easytown is city with a thousand stories and the hard-nosed homicide detective, Zach Forrest, is determined to learn them all.

The futuristic slum in eastern New Orleans is a violent place where any vice can be satisfied - for a price. As long as the taxes are paid and tourists continue to flock to the city, businesses are allowed to operate as they see fit. When a string of grisly murders rocks the city, homicide detective Zach Forrest must hunt down the killer responsible before they strike again.

Book 2 - Tears of a Clone: Torture tourism is an illegal sport in Easytown - unless the victim is a clone, then nobody cares.

When Detective Forrest discovers the mutilated bodies of three clones in a garbage compactor, he’s shocked to learn of the multi-million dollar industry of torture tourism. He embarks on an unauthorized investigation and discovers that the truth behind the clone murders is more terrifying than he’d imagined.

Book 3 - West End Droids & East End Dames: Everything comes crashing down on Forrest when a rampaging cyborg attacks, disrupting his investigation into the death of a lowly thumper club doorman who knew too much. Before he can determine his next move, a beautiful evidence clerk lands on his doorstep and forces her way into his life. Meanwhile, the precinct chief tasks him to track down and stop the street doctors who build the abominations.

But, will doing so cost Zach more than he’d expected?

What listeners say about The Easytown Novels: Books 1-3

I absolutely loved this series! I love the old time film noir detectives ala Sam Spade and the protagonist in this book, Zachary Forrest, reminds me of those fedora-wearing guys. I also love the original movie, "Blade Runner", and this series reminded me of that movie many, many times. Futuristic New Orleans has a section called Easytown (probably today's French Quarter) which specializes in sex clubs populated with sex robots. When several patrons and employees are murdered in gruesome ways, Zach has to try to find out who is doing the killing. Along the way, he becomes involved with a beautiful witness named Paxton Amora. This relationship comes to haunt Zach in more ways than one! This series has cyborgs, drones, droids, artificial intelligence, as well as drugs, prostitution, and murder. Zach goes about his job in a no-holds barred way, endangering love, life and limb, in order to get his man (or woman). If you are looking for a well-written cyberpunk series with traces of noir detective novels, this is the one you need to read or listen to. At the end of the third book, Zach has pretty much used up all of his favors within the NOPD, but the author hints at more adventures to come in the next phase of Zach's life. I love the characters, including Zach's assistant, Andi, who is little like Alexa (but much more fun). The dialogue is great and I especially enjoyed Zach and Andi's interactions. Zach has a smart-assed attitude that won't quit and adds a lot to the book. I loved the idea of the talking toilet that gives you an automatic urine analysis every time you use it. The narration was wonderful. Mr. Penz didn't just read this book, he portrayed every scene and you feel like you are watching a movie while listening. When the character is in pain, you can feel it in the narration. His performance added a lot to my enjoyment of these books. Brian Parker has done an excellent job with this series and I look forward to reading more of his work. He has built a world full of well-developed characters and futuristic technology that will keep the biggest cyperpunk fan reading. I will definitely recommend his writing to my friends! I was given the chance to listen to the audiobook version of this series through Audiobook Boom! and chose to review it.

Very well written. I loved the dystopian not so distant future. I was able to picture this guru really easily due to the descriptive writing. I felt very much like I was listening to an audio drama.

This series is amazing! This series is full of action, drama and suspense. You will be entertained! The narration is outstanding. The author does an excellent job with the character builds and plot. This was my first book by this author but definitely not my last! I look forward to reading more of his books. I was given this free review copy audiobook at my request and have voluntarily left this review.

Give this one a try!

First of all, I bought this series, and did not receive it to review. I wanted something "cyberpunk" and gritty, and this one really got me. There are 3 separate stories, each one stands in it's own right. I got really involved with all the main characters, and the setting is great. If you like cyberpunk or noir, I urge you to give this one a chance!

A strange soap opera of an adventure

This is just fun! The plots twist just enough to maintain interest. The characters evolve just enough to be loveable. Some of the bad guys are really evil, some not so much. Recommended to all fans of Stargate or Serenity... this adventure takes place on Earth, but it’s fun, romp around, shoot em up work of the future (with robots not aliens!) I received this audiobook for free in exchange for a review.

The Easytown Novels Books 1-3 are a great series of cyberpunk detective novels that take place in a futuristic New Orleans. It follows NOPD detective Zachary Forrest who is a tough no nonsense detective who is dedicated to his work but can be a bit exuberant while apprehending some of the dangerous criminals he deals with which can lead him into a bit of trouble with his boss and the higher ups. Zack also has an AI Andi who helps him out with his job and his life and he is very dependent on her for almost everything. Easytown is the sleaziest and most dangerous part of New Orleans that caters to all of humanities depravities and is full of sex clubs including Humans and androids. This futuristic world isn't full dystopian but it seems many morals have deteriorated and almost anything goes especially in Easytown. There are three separate stories included and they are all pretty entertaining and involve different aspects of this world, i.e. Androids, Clones, Cyborgs etc. This is a very fun series but can be very explicit, dirty, raw and quite violent. If you don't like violence, sex, swearing etc. than this book will not be for you, if you don't mind that than this series is very entertaining. The narration and production by Daniel Penz is top notch and really adds another element and enjoyment to the story, He has a great voice and must have some synthesizer or some other tech to do the voices of the androids, robots and AI which really make it seem more natural and life like. Overall I would definitely recommend giving this a listen as it is quite fun and entertaining and 3 books for 1 credit is a steal. I am looking forward to see where future books in the series might go and how Zack progresses. "Please note I was given this free review copy audio book at my request and have voluntarily left this review."

I am still trying to decide how to word this review. It’s never easy to review an entire series at once, especially one that was out there as this one. In the future, New Orleans has a section called Easytown where the French Quarter used to be. This is a spot that specializes in nightlife, sex clubs in particular. Except these are no ordinary clubs. They’re filled with sex robots. When patrons start to be murdered, the protagonist Zachary, has to find out who’s responsible. I loved this series because not only does it have a noir feeling, it holds an interesting balance of technology like cyborgs and artificial intelligence, but it also has plenty of modern day issues like drugs and murder. Zach is a very shoot first, ask questions later type of main character. He’s confident and not afraid to follow his gut. I didn’t like him at first, but I warmed up to him the longer I listened. All the characters, in fact, are interesting in their own ways. I liked Zach’s assistant Andi in particular. There are some things in the futuristic world that made me laugh. Such creative worldbuilding all around. The narrator did an absolutely fantastic job as well. He brought the stories to life. This book was given to me for free at my request and I provided this voluntary review.

Zack is a Police Officer that is on the case and gets himself in some trouble. I love mysteries and this us a fantastic one that grabbed me from start to finish. I hope there is more in the future this series is a fantastic listen. Shauna Joesten

Except death, depravity, and debauchery. Existing in a post-caring world where everything we're afraid of now has taken root we follow a homicide detective as he continues to try to do his job in a city that's definitely not going to play ball. In these novels he fights serial killers, torturers, and abominations, but mostly he fights against the predominant way of life. It's a combination of realistic (assuming things hit their inevitable conclusion) and brutal and doesn't look away from the way things could be. And for a series of novels like that you need a strong narrator and this certainly fits that requirement. I was riveted to the point of disgust at times, but never ceased to be entertaining. I received the review code for this audiobook at my request and have voluntarily left this honest review.