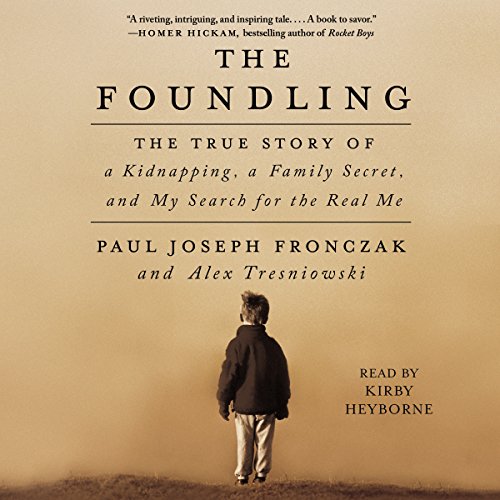 The True Story of a Kidnapping, a Family Secret, and My Search for the Real Me
Written by: Paul Joseph Fronczak, Alex Tresniowski
Narrated by: Kirby Heyborne
Length: 11 hrs and 24 mins
Categories: Biographies & Memoirs, Memoirs
5 out of 5 stars 5.0 (4 ratings)

The Foundling tells the incredible and inspiring true story of Paul Fronczak, a man who recently discovered via a DNA test that he was not who he thought he was - and set out to solve two 50-year-old mysteries at once. Along the way he upturned the genealogy industry, unearthed his family's deepest secrets, and broke open the second longest cold case in US history, all in a desperate bid to find out who he really is.

In 1964 a woman pretending to be a nurse kidnapped an infant boy named Paul Fronczak from a Chicago hospital.

Two years later police found a boy abandoned outside a variety store in New Jersey. The FBI tracked down Dora Fronczak, the kidnapped infant's mother, and she identified the abandoned boy as her son. The family spent the next 50 years believing they were whole again - but Paul was always unsure about his true identity.

Then, four years ago - spurred on by the birth of his first child, Emma Faith - Paul took a DNA test. The test revealed definitively that he was not Paul Fronczak. From that moment on, Paul has been on a tireless mission to find the man whose life he's been living - and to discover who abandoned him and why.

This is the story of Paul's heart-wrenching and tortuous journey to solve both mysteries and finally learn the truth about his identity.

The Foundling is a touching and inspiring story about a child lost and faith found, about the permanence of families and the bloodlines that define you, and about the emotional toll of both losing your identity and rediscovering who you truly are.

What a rollercoaster of emotions. Fascinating and at times frustrating read . Paul Fronczac should have read this himself. He has a great voice in the introduction and on the video on his web site .
The narrator was a bit too sappy .
I sense this story is not over .
I developed a renewed interest in my own ancestry while reading this book and found out some disturbing facts of my own . Submitting my DNA has changed the game.

What a shocking and incredible story!

At 10, a little boy learns he had been kidnapped as a newborn. Later, he learns it was a full 2 years before he was 'found' and returned 'home'. But was he the same child? And if not, who was he? And where was the kidnapped infant? Follow this journey of discovery, from the feeling 'other' and not really part of his family, to the twists and turns that his story takes as a result of today's access to DNA and sites like Ancestry. It makes me think of the thousands of skeletons in people's closets that are never, or rarely, revealed. Fascinating stuff, and a compelling story. I hope one day more of his story will be revealed.

Prepare yourself for a journey that will take you to shocking places!

Warning: You won't get past chapter 1 without being hooked and pulled into this man's unexpected journey. Just know ahead of time that once you start listening, the next 11 hours of your life will be spent with Kirby Heyborne in your ear (narrating this so masterfully) because you will not be able to stop listening.

It's an unbelievable story from start to finish. Paul's continual honesty about his shortcomings and fragility and the brutally raw truth about dark questions surrounding his genetics ground this book. I have yet to rate a book on Audible and I've been an avid listener for 2 years. I have never felt *this* compelled to rate/review a book.

Giving credit where credit is due! Paul, Alex and Kirby hit this one out of the park!

I can't even begin to imagine what it's like to live the life of Paul Joseph Fronczak. From feeling like "The Other" in a family he discovered not to be his own, to finding the nightmare of his real family roots, this is a story of deep and dark secrets, of choices made in unthinkable circumstances. It's a story of people who devoted themselves to his cause, veritable Dream Teams in genealogy, crackers of code, people hunters extraordinaire.
It's a fairly non-stop listen, and Fronczak is a driven man whose story is sure to haunt and inspire. My only problem is that he, in his search/obsession, starts abandoning his own family, leaving his daughter to feel perhaps as unattached as he once felt.
His findings shed light on his ability to distance and detach without emotion, but one has to ask: How much is heredity, how much is environment, and how much is personal choice? Still, it's a darkly compelling story, still unraveling, still evolving.

The events in this book were fascinating and horrifying, however I felt like I could have read a 10 min article and got everything I needed about the story. Personally I didn't like the authors style and felt like he was trying to hype up every little detail, as if it was an episode of dramatic TV. Which would have been more enjoyable. If you're interested in this story I recommend you spend 15 mins googling the events and save yourself hours of listening.

I Was Totally Engulfed By This True Story

Some of my most intense interests are genealogy, the search for one's ancestors, and the after effects of the adoption process and its varying effects on people. This book seemed right up my alley and once I learned of it, I grabbed it and started listening immediately.

The author has an unusual and totally unique story to tell. He was kidnapped from a hospital as a newborn, then later abandoned in front of a store, and subsequently returned to his parents. Or is this what really happened? He certainly never felt he fit in to his family. In middle age, he could no longer stand to wonder about who he was, why he behaved as he did, and did he really belong to these parents?

Join him in his book, feel the ups and downs, the sheer horror and excitement at what he learned, things he never dreamed of or even speculated on. From my own personal experience, once you open yourself up to learning your family's deep dark buried secrets, it is a trip from which you cannot turn back. It can be filled with incredibly amazing breakthroughs but also with disbelief and utter disappointment or even horror at the behaviors of those very ancestors you are so keen to learn about. Whether it is good or bad news, it is always eye-opening and can be very exciting.

Kirby Heyborne gave a great narration. He 'became' the author. He was wonderful.

I felt swallowed up by Paul Fronczak's story, his almost fanatical search for the truth of his existence, his tenacity, and his reactions to what he learned. I finished the book in two days. It is still playing in my mind in such a way that I am not ready to even contemplate my next read yet.

Not only is this story captivating, but it is well written and narrated. Your mind won't wonder off even for a minute.

My daughter recommended this book to me. Her husband has been on a quest to find his adoptive parents. He loves his adoptive family, but medical concerns have led him to investigate. Like Franczek he was able to locate some family members. This story is fascinating as it doesn't wrap everything up neatly.

Paul was kidnapped a day and a half after birth from a Chicago hospital in 1964. He was (or at least they thought it was him) some 13 months later. As he grew up he felt like he didn't belong with his family, though he loved them.His story of search and discovery is fascinating. Not all his questions were answered; he is still searching for some things. But it kept me and my husband listening during a long driving trip. The narrator did a good job; he was straightforward and easy to follow. We highly recommend this book.

Wow what a story!

Not only an incredible story, but it is very well told. The reader is excellent too. I will be following this story as it continues to develop. The author has a blog etc.

Intriguing story of perseverance and hope

Story line is brilliant with so much detail of the search for whom Paul really was. The selfless help of so many others makes one realise how essential people and relations are in ones life. Once you step on that road to find yourself I guess that what you have at that point in time, will just be pushed away together with "i will deal with it later" . Paul had become so self absorbed in his search to find out who and what he is, and it is kind of hard to understand it all, because I have actually no idea how he really felt, even though he is very good in explaining the anguish he went through. I think it is just to big and overwhelming to comprehend. It seems like a bush fire out of control. What I admire the most is their perseverance. Backlash after backlash and yet at least one of this remarkable team got up, if not all, and continued the search. This is a book of hope although one has to realise majority of abandoned and adopted children will never have the means and time to track down their ancestors. But I am very happy for Paul and hopes he will find peace and forgiveness and most of all be able to love someone again.

Wow! My emotions went from Goosebumps to tears to laughter. Great book. I recommend highly

The narrator was too sappy.
The story it’s self is horribly sad but this writing is just way to long.
Happy the writer is finally on a good path.