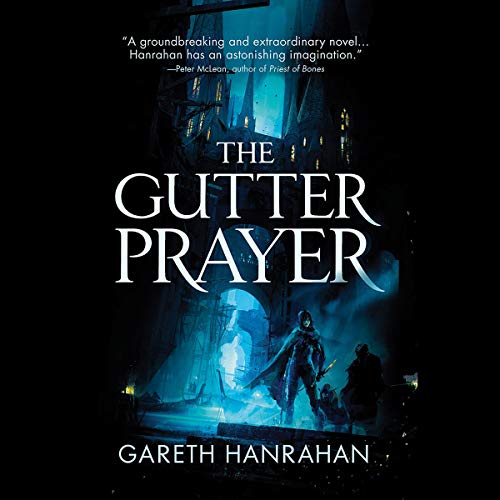 Written by: Gareth Hanrahan
Narrated by: John Banks
Try for $0.00

"The Gutter Prayer is captivating and complex. Guerdon is a city that seethes with history, horror, and hidden secrets." (Nicholas Eames)

A group of three young thieves are pulled into a centuries-old magical war between ancient beings, mages, and humanity in this wildly original debut epic fantasy.

Enter a city of saints and thieves....

The city of Guerdon stands eternal. A refuge from the war that rages beyond its borders. But in the ancient tunnels deep beneath its streets, a malevolent power has begun to stir.

The fate of the city rests in the hands of three thieves. They alone stand against the coming darkness. As conspiracies unfold and secrets are revealed, their friendship will be tested to the limit. If they fail, all will be lost, and the streets of Guerdon will run with blood.

"A groundbreaking and extraordinary novel.... Hanrahan has an astonishing imagination." (Peter McLean)

The Gutter Prayer is an epic tale of sorcerers and thieves, treachery and revenge, from a remarkable new voice in fantasy.

What listeners say about The Gutter Prayer

I'm going to get this down in bullet points because there are lots of useless reviews that critique and interpret books and comparatively few that provide me with sufficient information to decide if it's worth trying. So, here are some of the things I think define this book.

-First chapter is in second person AND IT WORKS
-The rest of the book is in third person and follows a handful of characters, one at a time. None of that omniscient narrator garbage that makes it sound like a child explaining a drawing.
-Superb, Mieville-level use of language
-A complex, gothic city
-Insane gods, and insane interactions between those insane gods and sane and insane non-god characters
-A race of ghouls who are born undead(?) and live(?) alongside the living, and can become insane gods
-Imaginative everything, including diseases
-Interesting characters
-A relentless plot
-This line: "Rain drums on the warehouse roof like fingers on a coffin lid."
-Cool fights
-Explorations of fear, despair and complicated friendships
-Surreal yet visceral imagery

This book is a tour de force of originality. If you're sick of dragons but want to read fantasy, I hope you get this book. If you like weird fiction, Bloodborne, brilliant and beautiful use of language, horror, schemes, or monsters (oh my god, the MONSTERS this guy came up with), I think there's a good chance you'll like Gutter Prayer.

Let me start by saying that this is a very good book and that my frame of reference for my somewhat unenthusiastic review is that of someone who has read and reread the fantasy greats (Malazan, WoT, King Killer, The Dark Tower, First Law, Stormlight, etc.). Additionally, I only listened to the first book in this series. The story is fine, though it can be a little choppy (while Malazan started that way for me it had resolved by the end of Gardens). Parts drag while others felt rushed. My major reason for my not loving this books, was just that, I didn’t love it. I didn’t devour it like I have other series. There were stretches where I did, but I never found myself thinking on the characters between putting on the audiobook. After listening to the first book, I’m now in search of a new series. If you haven’t read/listened to one of the series I mention above (and you like High Fantasy) or some others that are often praised, then throw this on your wish list and come back to it if you can’t find anything else.

WOW!!! To think I almost missed this book!!!

I bought the audiobook because I didn’t have enough time to read this book! And, I’m glad I did! Thieves, scholars, elite, law enforcement, and magic users working out a puzzle of myth, legend, and religion!!! Great story, wonderful characters, a believable world, and, of course, great narration!!! I can’t wait for Book 2!!!

A full review will be available on my blog I. Due time!!!

I was a little unsure about this book after reading the reviews, but had been looking for another series with John Banks as narrator after listening to the Tower of Babylon books. My trepidation continued for a few chapters, but I eventually began to enjoy the book.

This story is different than the usual fantasy book with its unique setting in a semi industrialized world with trains, subways, powered boats, and guns. The characters are equally different, with one of the main POVs a stone man and another a cannibal ghoul. There is a wide variety of people and creatures.

While the originality of the setting and characters are a strength of this book and kept it interesting throughout, sometimes the details of the story became a little confusing. The author also relied a little too much on the (magic?) created by the city’s foundries as an explanation for how anything convenient would work. The trains, guns, lights, or anything else needed, works on this magic. It was a bit too convenient.

Overall though, Gutter Prayer was a good listen and a nice alternative to the usual sword and sorcery fantasy. There were a few hiccups, but not unusual for a debut book, and nothing that should stop you from giving this a listen.

Update: The third book of this series (The Broken God) has been released for more than a year now. The author's website indicates there are no immediate plans on releasing that book in audiobook form. If you are beginning the series you should be aware that audio versions of future books in the series may not be available.

Now in one of my top 10 favorite book. An amazing dark fantasy, if HP lovecraft and joe ambercomie wrote a book together this would be it.

This book mainly functioned as background noise for me. The story had too many layers, and the characters were lacking in development, which is why I couldn't fully engage. The narrator did a very respectable job and may have been the only reason that I listened to the whole book.

Give it a try.

Gutter Prayer had a good and unpredictable storyline, pretty well developed characters, neat descriptions of the supernatural powers, and creative creature societies. It sometimes kinda dragged but it was well worth a read, I will probably relisten to this book in a few months to see what I may have missed.

Well worth the credit or buying the hard copy.

This is a fascinating book, very complex characters and storyline. The unique blend of god and human frailty together was what kept me listening. I did need to develop a character list for reference, but so worth it. The writing is stunning at times. It reminds me of Imajica, Clive Barker’s work. The narration is spot on.

A Solid Grimy Fantasy; Good Start for a Series

Thieves, cutthroats, gangsters, political
corruption, forgotten lore, eldritch horrors, divine champions, mystery, and conspiracy. Mix Jack Vance, Fritz Leiber, and Lovecraft, stir in a city full of class and factional divisions, then set the whole thing on fire. Grimy and nasty, but not overly gleeful about it. Dark without being grimdark.

Didn't finish, will try to some day when so bored that anything would be ok. voice was ok, but story was so hack that I put it down, rated it low, just so other people know. real reviews on here would be nice. also, has anyone noticed you can still pay cash on the website but have to pay a full credit for what is a $5 book on the app? isn't that illegal?