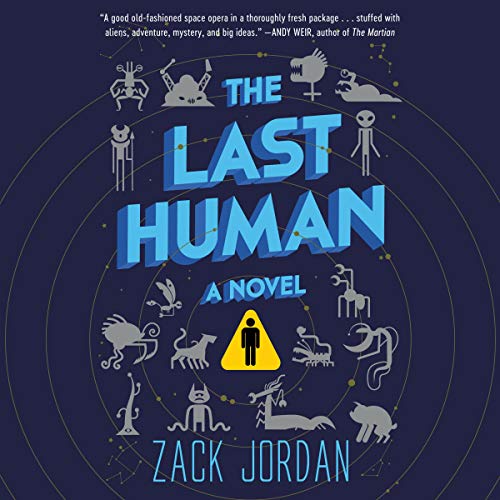 Written by: Zack Jordan
Narrated by: Bahni Turpin
Try for $0.00

The last human in the universe must battle unfathomable alien intelligences - and confront the truth about humanity - in this ambitious, galaxy-spanning debut

"A good old-fashioned space opera in a thoroughly fresh package." (Andy Weir, author of The Martian)

"Big ideas and believable science amid a roller-coaster ride of aliens, AI, superintelligence, and the future of humanity." (Dennis E. Taylor, author of We Are Legion)

Most days, Sarya doesn't feel like the most terrifying creature in the galaxy. Most days, she's got other things on her mind. Like hiding her identity among the hundreds of alien species roaming the corridors of Watertower Station. Or making sure her adoptive mother doesn't casually eviscerate one of their neighbors. Again.

And most days, she can almost accept that she'll never know the truth - that she'll never know why humanity was deemed too dangerous to exist. Or whether she really is - impossibly - the lone survivor of a species destroyed a millennium ago. That is, until an encounter with a bounty hunter and a miles-long kinetic projectile leaves her life and her perspective shattered.

Thrown into the universe at the helm of a stolen ship - with the dubious assistance of a rebellious spacesuit, an android death enthusiast on his sixtieth lifetime, and a ball of fluff with an IQ in the thousands - Sarya begins to uncover an impossible truth. What if humanity’s death and her own existence are simply two moves in a demented cosmic game, one played out by vast alien intellects? Stranger still, what if these mad gods are offering Sarya a seat at their table - and a second chance for humanity?

The Last Human is a sneakily brilliant, gleefully oddball space-opera debut - a masterful play on perspective, intelligence, and free will, wrapped in a rollicking journey through a strange and crowded galaxy.

"Easily the most fun read I’ve had all year! Plays out like a kill squad of Bene Gesserit on a spree in Peter Hamilton’s Confederation, using a Hitchhiker’s Guide to navigate." (Clint McElroy, number one New York Times best-selling co-author of The Adventure Zone)

"If it's strange-realistic alien perspectives that you seek, The Last Human delivers characters who spring from the page with empathy, danger, cryptic motives, and chills, all of it amid plenty of action and mystery, in a galaxy of wondrous possibilities." (David Brin, New York Times best-selling author of The Postman and the Uplift Saga)

What listeners say about The Last Human

Half way through and giving up.

This is so full of itself its near collapsing like a black hole. The story drags along just sort of meandering then stuff happens and then its back to dragging. All the interesting stuff its built flies right out the window to show just how amazing another character is because they are "tier three". Which are evidently so intelligent that it borders on prescience and they can predict things perfectly in a way that negates free will.

Narration is decent at least

A good story, despite the reviews

First, Narration is excellent, period. I can't wait to hear more of her work.
The story is twisty, and the main character a teenager of sorts, so there's a bit of that angst. But I'm not going to complain about the whining, or the any of the other things other reviewers focused on, because the story is good. The author does a great job building the characters, the heart of the story. Worth the credit, and worth purchase if you don't have the credit.

Really loved the first half

The audio performance in this book is awesome. The first half of the story was really great...but the second half. Typically I don't like to leave bad reviews...and the 2nd half wasn't bad it just wasn't for me I guess. At some point the book just went a different route than I expected.

Again I didn't hate the book...it just wasnt for me. The world building is really amazing and the concept of the network and the little stories it told from time to time was really interesting and reminded me of Hitchhiker's Guide. I actually would be interested in a book about the network but told in little snippets and stories about other species.

So engaging. So brilliant. So imaginative. Not a rehash. All original. Surprises at every turn. Amazing ride. Highly recommended.

A huge wow of a book

I chose this audiobook on a whim, having never heard of it before. I am so glad I did.

First off, this book is all over the place - and it works. Bravo to the author on that. We are introduced to many MANY characters and all the important ones were easy to remember. The easy use of both binary and non-binary gender, the use of the word 'intelligences' as opposed to people since some of those intelligences were not bi-pedal, were wonderfully done, not over explained, and a natural part of the universe.

The author's curving line of humans being evil is wonderfully mastered, especially with the way he brought in so many curve balls that one has to keep listening and devouring, changing one's mind from moment to moment as to how this book could possibly turn out.

It was nothing like I expected, and everything I loved. From Shenya the Widow's mind to Sarya the Daughter's, we see a multitude of tiers (intelligence levels) and how the upper tiers truly are full of themselves and why. I loved the dance between Observer and the Network with Sarya and her friends stuck in between.

One thing I wished? That Number 11 could have been found to be okay. I loved Number 11. Then again, I adored and loved all the sub-legal intelligences in the book: they were all so happy in their lives. Well, Number 11 had his moments of happy. Mostly he was still trying to figure things out. But there was Ace/Helper, and Phil, and don't forget Shokyu the Mighty.

This epic of a story could have lagged... and there were several areas where it could have badly, but the author thrust in curves. When that happened we'd get a report from Network, shortened for our tier, of course. Or that area where Sarya gains her mother's memories. That could have lagged excessively, but the bot that was doing the transfer kept breaking in with warnings and other 'helps'. They made me laugh and definitely stopped the lag.

The ending was so fast and abrupt I'm going to have to listen to it again to figure out exactly what happened. :)

This seems to be the author's first book. Will definitely be keeping an eye out for more.

The narration.
Bahni Turpin is fantastic. Absolutely fantastic except for one glitch, but I'll get to that in a moment. She had different voices for each character and they never faltered. If I had to choose a favorite? Observer. His voice was perfect for him, as was everyone else's, but there was something about it that always made me smile. Especially when he told Sarya to tell the Network to "f**k off". I laughed for a full minute and chuckled for another ten. It still makes me smile just to think of it.

Her performance was excellent except for one thing that kept popping me out of the story. You know that spot where a character says something and then the words are followed by 'she says' or 'he yells'? There needs to be little in the way of pause between those. And yet, a few times Turpin paused too long between the dialogue and 'she says', making it seem like either a section break or a chapter end. So when she would belatedly add 'says Shenya the Widow' it broke me out of the story each time. However, there were only 4 or 5 of those and they all happened toward the beginning of the book. That's the only thing that kept me from giving her 5 stars.

I highly suggest this book. It's fun, it's hilarious. You're going to fall in love with a whole bunch of characters. I did. I will be relistening to this book, though not for a few months. There's so much to it, I need the time to forget most of it before I start again.

it's a nice story. the nataror was fabulous which is way i stuck through it probably.
it had a few holes in the logic of the story line that put me off.

you know what! no! this was a great read and i did have fun with it!
taken alone, not comparing it to others. it's pretty good in fact.

also. it starts off going left. but then pow! it goes right! this was fun. A+ with a red pen.

The best science fiction story I have heard since the 3 body problem...Highly recommend it!

loses track of its own story

the main character gets very frustrating to hear about by the end of the story and the narrative gets too convoluted. By the end of it I was literally saying "of course that happened, why not?" out loud with every new twist and turn

An interesting story. Bahni Turpin is SO talented! I will seek out other titles that she reads, for the joy of her voices! YAY!

the summits and valleys

this was a curious minds Rollercoaster, the second you think you know whats going on, that your mind has wrapped everything up. your forced to expand.


this was a fabulous listen, and I'm sad the book ended. I hope there's more in the future.