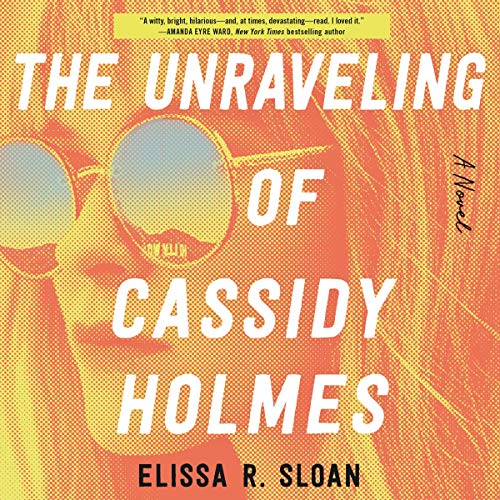 The Unraveling of Cassidy Holmes

“The Unraveling of Cassidy Holmes is a page-turning peek inside the glamour and brutality of life as a pop star. Sloan takes us on a wild ride through the world of music video shoots, expensive hotels, and arena tours - showing us the darkness that threatens just below the surface.” (Taylor Jenkins Reid, New York Times best-selling author of Daisy Jones & The Six)

“I didn't know I was waiting for a smart, literary writer to craft a novel about the rise and fall of a teen star akin to Britney Spears until I discovered The Unraveling of Cassidy Holmes. A witty, bright, hilarious - and at times devastating - read. I loved it." (Amanda Eyre Ward, New York Times best-selling author of The Jetsetters)

Cassidy Holmes isn't just a celebrity. She is “Sassy Gloss”, the fourth member of the hottest pop group America has ever seen. Hotter than Britney dancing with a snake, hotter than Christina getting dirrty, Gloss was the pop act that everyone idolized. Fans couldn't get enough of them, their music, and the drama that followed them like moths to a flame - until the group’s sudden implosion in 2002.

And at the center of it all was Sassy Cassy, the Texan with a signature smirk that had everyone falling for her. But now she's dead. Suicide. The world is reeling from this unexpected news, but no one is more shocked than the three remaining Glossies.

Fifteen years ago, Rose, Merry, and Yumi had been the closest to Cassidy, and this loss is hitting them hard. Before the group split, they each had a special bond with Cassidy - truths they told, secrets they shared. But after years apart, each of them is wondering: what could they have done?

Told in multiple perspectives - including Cassidy herself - and different timelines, this is a behind-the-scenes look into the rise and fall of a pop icon, and a penetrating examination of the dark side of celebrity and the industry that profits from it.

What listeners say about The Unraveling of Cassidy Holmes

The different voices got hard to follow at times, & the attempt at doing men/s voices was cringeworthy, but overall I enjoyed this book.

I did miss where the relationship between Rose & Cassidy became sexual- too much lead up & all of the sudden they’re in love? Not believable.

An excellent first novel, though only fit for those with strong stomachs. The multiple narrators make it come to life, though Brittany is the only one I recognize. Still, all do an excellent job. Ten out of ten.

I was not impressed with this book. To me, it read very much like a future memoir of the Spice Girls.

Where’s the rest of the book?

Spoilers ahead!
I liked the back and forth of this book between the past and the present. The author did a great job capturing the fandoms of musical groups during the time period. It reminded me a lot of Geri leaving the Spice Girls and all those members Destiny’s Child kicked out and replaced. That being said, the story is left unfinished and the reader unsatisfied because it does not wrap up Cassidy’s story. What did Cassidy do in the time after leaving Gloss? What was the trigger that caused her to take her life? This story had a great opportunity to speak to the me too movement and squandered its chance, especially with tying up the 3 subplots concerning the other gloss girls.

I think a lot of people don’t like this for 2 reasons: (1) Adults don’t like teenagers (2) YA novels are unfairly considered to be inferior in story telling and characterization.

From the onset, if you don’t like teenagers, young adults, or pop culture you will not like this story. Other than that, I thought this story was so rich and telling. I thought each of the four characters were beautifully unveiled and increased importance throughout the story.

Not only is this an important topic for the (13-21 yrs old) age range, but for anyone struggling with these tough topics. This book is a cry for those struggling to say it’s okay to be struggling, but don’t keep it all inside. Call out for help and understand that beauty, glam, popularity, and fame are not what it’s meant to be. Sometimes, it can even result in your undoing.

As far as the actual story goes I really like how the author made Cassidy relatable. She was not a bad person, but she was caught up in the Hollywood lifestyle not realizing how manipulative it really was. She was also a deeply caring and kind person, and wanted to do what was right, but many times those with influence didn’t want to do what was right. Also, Cassidy’s flaws and mistakes are also unearthed and one cannot help but to feel for her throughout and also to root for her.

Overall, this was a powerful story that is not only entertaining but can help some people.

I enjoyed this book and how the story unfolded past and present.
The reason for my 3 stars was the ending. It’s like the author just got tired of writing. I found it disappointing.

Take Ariana Grande, Rihanna & Chris Brown, Britney Spears, The Spice Girls, Harvey Weinstein, Justin Timberlake and combine with Janet Jackson’s wardrobe malfunction, Me Too, American Idol, Star breakdowns, and any other gossip column event in the past 20 years then roll up and spit out. You will have this book.

The story line is good but very predictable.

Good enough story aimed at a younger reader..
A lot of tragedy. Didn’t find the characters like able.

Good idea for a look at celebrity, but the shifting perspectives diluted the narrative’s impact. It was very unsatisfying that the bad male behavior was unpunished. At the end of the story, the members of Gloss were no more real than their public personas.