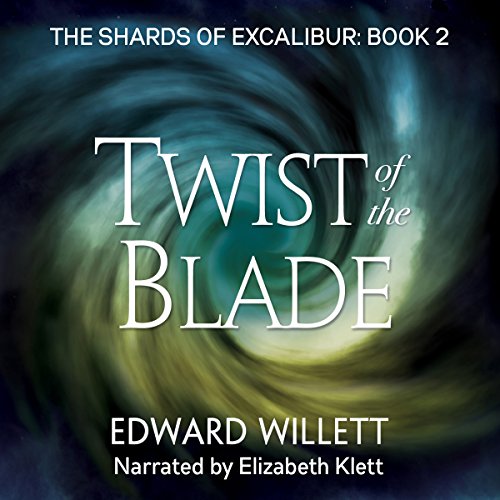 Twist of the Blade

Having saved the first Shard of the sword Excalibur from Internet mogul Rex Major (aka Merlin), Ariane and Wally are on the lookout for the second. Wally is worried that the power of the first Shard is already changing Ariane, giving her the strength to do good and evil, and when she badly injures his bullying sister, Flish, it seems he’s right.

Meanwhile, they have a serious problem: Ariane’s located the second Shard in France. Sure, her inherited powers from the Lady of the Lake enable her to travel magically through fresh water, but it hasn’t escaped their notice that there’s a huge saltwater ocean separating them from their next target. And Rex Major is already on his way there.

As Major uses Wally’s doubts - and his secret wish to be more than just a nerdy sidekick - to cause a rift between the friends, Ariane takes the chance to go it alone. But if the first Shard’s power is barely controllable, how will she fare when two Shards are united? And what can Wally do to get his friend back?

“The sequel to Song of the Sword improves on its foundation.... Willett realistically explores the difficulties Ariane and Wally face and paints Rex Major in such a light that readers may be unsure as to whether he is a master manipulator or misunderstood hero... Engrossing.” (Kirkus Reviews)

“A satisfying second instalment... Twist of the Blade offers an enticing sense of danger and excitement... It's refreshing to read a story in which the heroes and villains are not cut-and-dried, and readers can look forward to three more instalments in this genuinely entertaining myth-based series.” (Quill & Quire)

At the end of Song of the Sword, the first book in this series, I was extremely happy to discover that the audio book for the next part of the series was already available; I snapped it up and dove in. As with the previous book, the story of Ariane and Wally went in all sorts of directions I didn't expect, including some I didn't like very much at all. It certainly made for an interesting listen, but at times I was so frustrated with the behavior of both of the teens that I wished I was reading a physical book so I could throw it! I guess it's a sign of the skill with which Mr. Willett writes that I got so invested in his characters that I wanted to be able to knock some sense into them.

All the supporting players from the first book are back, mostly making trouble for the two teens. Rex Major manages to cause even more problems than he did last time. Without giving too much away, he's at the heart of much of the conflict that arises between Ariane and Wally throughout this story. Wally's sister, Flish, and her "coven" are back as well, and they are the trigger for one of the more spectacular outbursts of Ariane's powers. The biggest surprise, though, is how Ariane travels to the very-far-away destination of the second shard.

Elizabeth Klett does another fantastic job with the narration. The best part is that she's so good with her voicings of the various characters that I always knew who was speaking at any given moment. She also managed the accents for the characters in that very-far-away destination very well.

When I reached the end of the story this time, it wasn't exhaustion from all the adventure, but rather frustration that I felt. Aarrrgh! How could you leave everyone and everything in such disarray, Mr. Willett? That next audio book better come out soon!

Who do they believe?

The story continues as Ariane and Wally look for the second shard. Having her Aunt on board helps a lot. Rex Major’s intentions remain unclear. There are hints he may be the altruistic one, then again, maybe not. Tension between Flish and Ariane remain, and this only hinders Wally’s relationship with Ariane. I like the solution the author devised for the duo to cross the ocean. I think the choices made by the kids seem true to character and reality.

This is the second book I’ve listened to by this author. I’ve previously listened to Song of the Sword. I’m looking forward to the rest of the series.

This is the third book I’ve listened to by this narrator and I would listen to another. I enjoy her rendition of the characters and she brings out the emotion in the story.

This was a great follow up to book 1, Song of the Sword. The characters continue to be interesting and the narration is still quite good. The story is quicky and fun. This is shaping up to be a great new series that I am looking forward to seeing where it goes.

Twist of the Blade is the 2nd instalment in The Shards of Excalibur series. Ariana is a descendant from the Lady if the Lake. Yes, from Arthurian lore. Ariana and her friend Wally have been given a quest by The Lady - collect all the shards of Excalibur before Merlin does. That’s right. I said Merlin. Excalibur was broken into shards a few millennia ago to keep them from Merlin. Today he lives under the guise of Rex Major, a wealthy computer magnate who has magically tapped into the Internet. That idea is just crazy!

The Lady gifted (awakened) Ariana with the ability to manipulate water, to become water in its many forms. She uses these gifts to help her with the quest. As some questions are answered , many more come forward. Why does Merlin need Excalibur? Why is The Lady so determined to stop him? What role does Wally Knight play in this story? There is much more to find out; therefore, l am compelled to listen to the rest of the stories.

Elizabeth Klett does a great job of narration and bringing the characters to life. It isn’t easy to do justice to the voice of a teenage boy and then a middle aged British magician. I was given . this book, on my request, in exchange for an honest review. I would recommend this story to anyone who enjoys a mystery wrapped in Fantasy and Lore.

Once again, Elizabeth Klett brings the world of Arianne and Wally to life in a riveting story that leaves you wanting for more. This second book in the Swords of Excalibur series, “Twist of the Blade” is a nonstop rollercoaster ride from beginning to end, and anyone that likes thrilling stories with loveable characters will love it. I just have to find out what happens next, so I’m diving into the next book right away. This book is a must read for any fantasy lover. Heck, for any story lover.

The first book was a good book, and the sequel expands greatly on the scope of the first and is better book for it.

The exciting, wacky and dangerous adventure continue for Ariane and Wally. I loved this second installment, and I think fans of the first in the series will love it. That freaking Rex Major always trying to make things difficult, just wait to find out what he does this time!

Just when you think the twists have twisted in every possible direction, things go wonky. It's an exciting and thrilling story, and I was sucked in and wasn't let go until the end. Can't wait to get started with Book #3!

I was given this free review copy audiobook at my request and have voluntarily left this review.
Please take a moment to click the "YES" ("Helpful") button below if you found this review helpful :) Thank you!

Not sure how to review this book...

I not sure how to review this book, but here goes...
I really enjoyed the first book in the series, but this one... Not so much!  Twist of the Blade has an enjoyable modern take on the Lady in the Lake story, and I really like Ariane and her friend Wally, but, I was really disappointed in this book... Don't get me wrong, the story is still fun. Rex Major (aka: Merlin) is still a complete wanker, but both Arian and Wally  continually fell prey to unintended, unspoken slights... Hurt feelings and sullenness became the new kind of normal as their continuing inability learn from previous mistakes took over the story!  I really just wanted to shake the kids, put them into a room, and not let them out until they talked out their problems! Bet, it wouldn't have taken 20min. And they'd've been back on track and fulfilling the quest... I must admit to having a Very low tolerance for this worn out, annoying trope. It's sad that an otherwise fun tale, was dragged into the ground by this!

I was given this free review copy audiobook at my request and voluntarily left this unbiased review...

Great second book in this series!

This is the second Shards of Excalibur book I’ve read. I love the premise of this series – a female protagonist on the quest for the lost pieces of the famous sword. Ariane has been given her mission by the Lady of the Lake and in this incarnation the Lady’s brother is the evil Merlin. Wally, Ariane’s best friend and sidekick, is ever faithful but in the second book in the series things begin to change.

First, Ariane is more impulsive and aggressive in this book than the first installment of the series. She knows who she is now and isn’t going to let the school bullies push her around any longer (even if the leader of the bullies is Wally’s older sister). When the girls don’t back off, they find themselves in the hospital.

Wally, on the other hand, is starting to have his doubts about Ariane. She is still his best friend and it is obvious he loves her but she also put his sister in the hospital. Merlin, seeing something of Arthur in Wally, manipulates the doubt Wally has to sway him away from Ariane.

When Ariane locates the second shard of Excalibur (in rural France) the only way she can travel there is through the clouds … and she can’t take Wally with her. Wally must travel the traditional way via airplane. Seeing the two separated, Merlin doesn’t miss his chance and moves in to convince Wally that for Ariane’s own safety, he must help Merlin.

I’ve said before that the second book in a YA series is often the make or break book. Following up a strong debut novel in a series is difficult and many authors struggle with it. But Edward Willett comes through with Twist of the Blade. This was a fast paced, entertaining second book in this series, which also incorporated character development and a depth to the story that was missing in Book 1.

Twist of the Blade ends with the perfect cliffhanger … Ariane is alone at the end of the book making decisions as to her future course of action. Wally, meanwhile, is with Merlin in Toronto. I can’t wait to see what is in store for our young characters in Book 3.