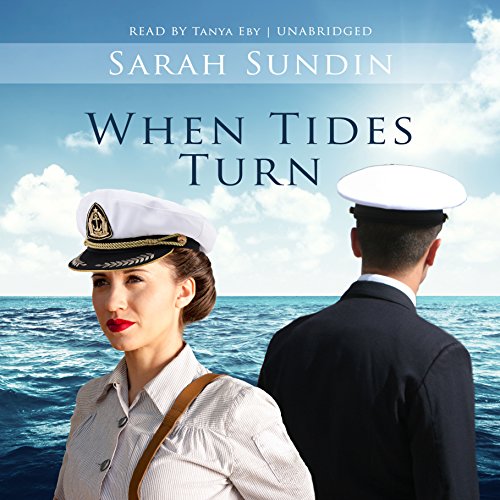 Written by: Sarah Sundin
Narrated by: Tanya Eby
Try for $0.00

When fun-loving glamour girl Quintessa Beaumont learns that the Navy has established the WAVES program for women, she enlists, determined to throw off her frivolous ways and contribute to the war effort.

No-nonsense Lieutenant Dan Avery, hoping to make admiral, has been using his skills to fight German U-boats. The last thing he wants to see on his radar is a girl like Tess.

For her part, Tess works hard to prove her worth in the Antisubmarine Warfare Unit in Boston - both to her commanding officers and to the man with whom she is smitten.

When Dan is assigned to a new escort carrier at the peak of the Battle of the Atlantic, he is torn between his lifelong career goals and his desire to help Tess root out a possible spy on shore. The Germans put up quite a fight, but he wages a deeper battle within his heart. Could Tess be the one for him?

Sarah Sundin carries listeners through the rough waters of love in a time when every action might have unforeseen world-changing consequences.

What listeners say about When Tides Turn

I couldn’t even finish the last three hours of this book. I felt it was insipid with a main character who was shallow and unrelatable. Everything about her indicated that she wanted to be a strong, independent woman in a time and career where women were so often marginalized; however, she fell to pieces around a man and only found strength through him. I had hoped for a fun read to get lost in, but over and over I was just annoyed by the main character.

I loved this book! It drew me in and I became invested in these characters, my heart skipped a beat a times or raced waiting to find out what happened. It is a great listen! Loved every single second of it.

Wonderful end to a favorite series.

I listen to books all the time. This was a struggle. Way to many details more like a history lesson characters were boring. Had to stop listening

Characters flat. I stayed with this for several chapters but then gave up on hoping it would improve.

Excellent character development and also gave me a better idea of how important the Navy was to winning the war for the Allies in Europe.