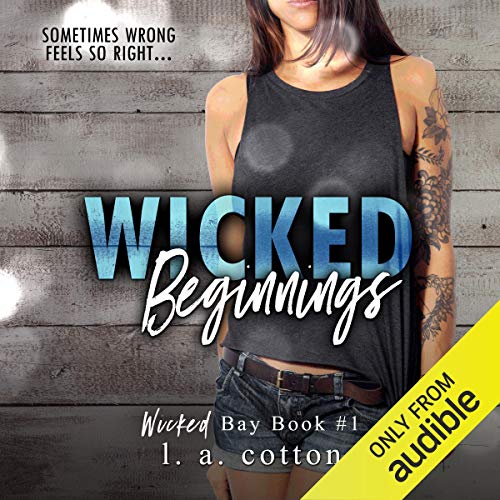 Written by: L A Cotton
Narrated by: Luiza Westwood
Try for $0.00

When 17-year-old Eloise Stone finds herself half way across the world, moving into her uncle's pool house, she expects things to be...awkward. She doesn't expect to come face-to-face with the boy from last summer. The boy who made her feel things she'd never felt before. But a year is a long time, and Lo isn't the same girl she was then. Besides, they're family now.

Maverick Prince acts as if he doesn't remember her, treating Lo like nothing more than an annoying younger sister, and not in a "he cares" way, just in a "he's an arsehole" way. One thing's for sure, he isn't just dangerous for her sanity - he's hazardous for her heart.

Lo thought moving to Wicked Bay was the worst of her problems, but as life begins to unravel around her, she's going to find out it's only the beginning....

What listeners say about Wicked Beginnings

This is my first book by this author, and I am sooo addicted!!! This is the first book in the Wicked Bay Series and it starts off great. It has so much angsty romance and high school drama. Maverick is the dark, troubled guy who Lo (Eloise) falls for. He’s actually her STEP- cousin....yes, I said STEP! The side characters are great too. All well written, with really great dialogue and great character development.
The story reminded me of Erin Watt’s The Royals, and Siobhan Davis’ The Kennedy Boys. Of course, not exactly, it has its own unique story. But we shall see as the series goes on. I’m excited to continue on!! I highly recommend it!!

I should also note that I listened to this on audible. It’s narrated by Luiza Westwood, she is fabulous!! I loved the audible!!

I really enjoyed this book. I loved the story and the characters. The Narrator for the audiobook did a great job. I can’t wait to read/listen to the second book.

I have to admit I was a little confused at the character dynamics in the beginning of the book. Who’s related to who and the reason Maverick stays away from Eloise. It didn’t and still doesn’t make sense. Although confusing I’m interested enough to purchase the next book.

There is a good story in there but it went into too many directions. I guess the story will become more clear in the next book.

7 months ago, Eloise’s (aka Lo) mom and brother died in an accident that Lo barely survived herself. After weeks of intensive care and couple months rehabilitation, loss and grief send her on a destructive path. Lo knows she’s worried her father with reckless behavior, but recognizes the alcohol & sometimes drug use for what it is, a way to numb herself from the deep grief of losing her brother and mother. Before the tragedy, Lo was a good girl & her father decides they both need a new path to be healthy. The book begins at the point her father introduces her to that path of change, which she is not happy about, and moves them to America (from England) to be closer to his family, He presents this to her as the chance they need together as a fresh start, and going along out of love for her father and guilt over his worries for her, begins the book with their arrival in America.
He arranged for them to live for a month or so at his wealthy brother’s home, along with his wife & their four teens (all around Lo’s age). But what she didn’t expect to come face to face with the mysterious guy she met on her only other trip to America a year prior, and just months before the accident that changed her life forever. But that captivating beautiful boy was now changed just like Lo. He was angry and violent, either treating Lo dismissively or looking at her with dark empty eyes and that's not all! Lo finds out the real reason for coming to the states and she rightly feels betrayed by the only family member she has known.....and it seems like everyone else is in on the secrets but her...
I really liked this 1st book! It reminded me of the dynamics in some of my fav NA romance series;
⭐️“Paper Princess” (the Royal series, by Erin Watt)
⭐️“Fallen Crest High” (fallen Crest series by Tijan) my all time fav in this genre
⭐️“Finding Kyler” (the Kennedy Boys series by Siobhan Davis)
⭐️“Binding 13” (Boys of Tommen by Chloe Walsh)
Can’t wait download next book in series!

The storyline as a whole was interesting. Kept me wanting to listen. The characters were well written however I feel the plot is awkward. I feel the protagonist is unrealistic about how she deals with her fathers love interests. She is far too mature, especially after everything she's been through. She's also way to accepting of her grandparents. Also how she allow the male lead character to keep on omitting important information. Very unrealistic. However the story was good enough that I finished it.

From the moment the narrator began I was invested. When I read this book, I found difficulty in following who was who in the beginning. Thankfully the narrator made the characters as accessable as she did. The main character, 'Lo', was someone I couldn't help but root against while reading the book.. but hearing her come to life with audio, I switched 180. I found her funny when I believed her to be dry, I became empathetic to her struggles. I love the use of accents and how quickly she executed them midsentence. Easy and enveloping 8 hours WELL spent. Looking forward to hearing the next one!

Story is amazing. And the way the narrator read it captivated me so much. She really got me invested into the story.