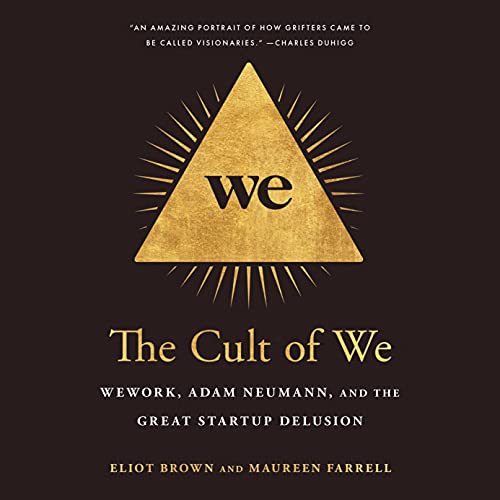 The Cult of We

“If I had to make a list of top five business books of all time, this would be on it. It’s just so damn engrossing.” (Christopher Mims, Wall Street Journal tech columnist)

The definitive inside story of WeWork, its audacious founder, and what its epic unraveling says about a financial system drunk on the elixir of Silicon Valley innovation - from the Wall Street Journal correspondents (recently featured in the WeWork Hulu documentary) whose scoop-filled reporting hastened the company’s downfall.

WeWork would be worth $10 trillion, more than any other company in the world. It wasn’t just an office space provider. It was a tech company - an AI startup, even. Its WeGrow schools and WeLive residences would revolutionize education and housing. One day, mused founder Adam Neumann, a Middle East peace accord would be signed in a WeWork. The company might help colonize Mars. And Neumann would become the world’s first trillionaire.

This was the vision of Neumann and his primary cheerleader, SoftBank’s Masayoshi Son. In hindsight, their ambition for the company, whose primary business was subletting desks in slickly designed offices, seems like madness. Why did so many intelligent people - from venture capitalists to Wall Street elite - fall for the hype? And how did WeWork go so wrong?

In little more than a decade, Neumann transformed himself from a struggling baby clothes salesman into the charismatic, hard-partying CEO of a company worth $47 billion - on paper. With his long hair and feel-good mantras, the six-foot-five Israeli transplant looked the part of a messianic truth teller. Investors swooned, and billions poured in.

Neumann dined with the CEOs of JPMorgan and Goldman Sachs, entertaining a parade of power brokers desperate to get a slice of what he was selling: the country’s most valuable startup, a once-in-a-lifetime opportunity and a generation-defining moment.

Soon, however, WeWork was burning through cash faster than Neumann could bring it in. From his private jet, sometimes clouded with marijuana smoke, he scoured the globe for more capital. Then, as WeWork readied a Hail Mary IPO, it all fell apart. Nearly $40 billion of value vaporized in one of corporate America’s most spectacular meltdowns.

Peppered with eye-popping, never-before-reported details, The Cult of We is the gripping story of careless and often absurd people - and the financial system they have made.

“Absorbing...The Cult of We is both a ticktock of Neumann’s self-immolation and a primer on the ways and mores of a start-up culture populated by visionaries, grifters and moneymen.... Like Bad Blood...The Cult of We is novelistic in detail and often thrilling.... It’s like watching a car careening toward a wall at 90 miles an hour.” (Allison Stewart, The Washington Post)

What listeners say about The Cult of We

I usually don’t write any review for much of anything but I was impressed by the depth of this book . The narration was solid and I didn’t feel that I lost anything by her performance. I’m not the most gifted writer but I can simply say that I recommend this book and it was worth the wait .

They must have done so much research to cover as much as they did in this book. It was hard to stop listening it was that good.

What a fascinating account of a megalomaniac. His rise and catastrophic fall. This is a well written and very well researched accounting of the craziness that was we work under its founder, Adam Neumann. Well done!

it's hard to imagine what charisma can do for somebody that can pull the wool over people's eyes for such a long period of time. meticulously detailed and a great read,. and hopefully a warning to others that there has to be a there there. I hope this guy ends up facing some sort of prosecution problem since robbing a bank and robbing investors like he did are pretty much one of the same.

One of the more fascinating books I have read in a long while, on the same level as “Extraordinary Popular Delusions and the Madness of Crowds” by Charles Mackay, in essence both describes persuasion and gullibility - of epic proportions.
I highly recommend this book. A page turner that reads like a thriller.

Peer into the Rabbit Hole

Engaging, intriguing look at the train wreck of We Work in slow motion. The cult of personality can drain pockets and drain dreams.

Such an interesting story - I couldn’t stop listening. A wild glimpse into the startup world, that may or may not have learned lesson from the arc of WeWork.

This was well written, researched and painted a great timeline of the rise and fall of We Work. I walked away from this thinking - wow, Neumann really is just an immature narcissist and the bankers and employees who let him play with this company like a child without raising concerns are also complicit in its demise. Time and time again it is shocking to me how people just overlook fatal flaws in business because of a charismatic leader. This was super fascinating and definitely well done, I don’t think many people realize just how much influence We Work has had over the startup economy.

Great listen!! I'm a big fan of digressions in stories to help you understand the bigger picture. Really liked that they explained the roles that MBS and Masayoshi Son had in creating The Vision Fund and Softbank's investment in WeWork.

Fascinating story with a solid narration.

The epilogue was also an interesting commentary on what is allowing companies to be overvalued in the market today.