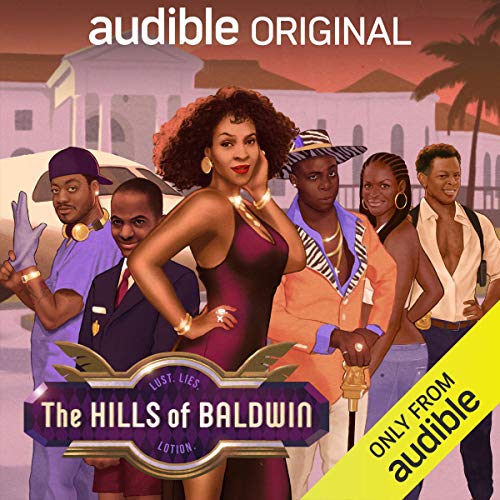 The Hills of Baldwin

From the mind of Jordan Black and the hit improv troupe The Black Version, a completely improvised, unscripted, and utterly unwoke soap opera that takes place in Baldwin Hills -- a.k.a. the black Beverly Hills -- where wealthy CPAs live next to big time rappers and NBA superstars. A place where no money scam is too short and no weave is too long. Now, sit back and listen as we take you from crabs in a barrel to…The Hills of Baldwin.

Meet the Bourgeois family, the most wealthy and powerful clan of conniving schemers in all of Baldwin Hills, CA. High above Los Angeles in their palatial mansion, the Bourgeois’ bask in luxury and vie for control of the Fine Swine skincare empire. Dark secrets from the past bubble up to the surface, and before long somebody winds up dead. Who is getting stabbed in the back? Who is doing the stabbing? What other secrets will refuse to stay buried?

It’s like Empire, Real Housewives and The Young and the Restless mixed together, but with even more drama, cattiness, and absurdity…and without a script! The cast of The Black Version (the long-running improv show hosted at the legendary Groundlings Theatre) jumped into the studio without a roadmap or a safety net, to make up an entire soap opera on the fly and off the chain. Pop some champagne and some popcorn, because it’s poppin’ off on…The Hills of Baldwin!

Featuring the voices of these talented improvisers:

With special guest Wayne Brady (Let’s Make a Deal, Whose Line Is It Anyway?)

Narration by Vivica A. Fox (Empire, Set It Off)

“[The Black Version] consistently sells out its Monday night slot at the Groundlings Theatre – L.A.’s most legendary improv venue. It helps that the cast is a comedic A-team.” - Rolling Stone

"Black and his cast take particular joy in luring audiences into certain racially familiar situations and then, in a flash, flipping them on their head.” - LA Times

What listeners say about The Hills of Baldwin

Fantastic Performance and Production - Will make you laugh

I got into this book more in the second chapter and it kept me laughing, out loud! Fantastic performance by all the narrators , great use of sound effects and music - it feels like I’m listening to a TV show.
This is definitely one of the more Zany tales on Audio so if you have a sense of humour, and enjoy being amused, it’s a great addition to lighten the mood.

Not what I was expecting!

I was looking for a great black drama instead it was more of a parody. If you're looking for a fun book you could get into it. There are some parts that are a bit problematic.

great book wish it was longer