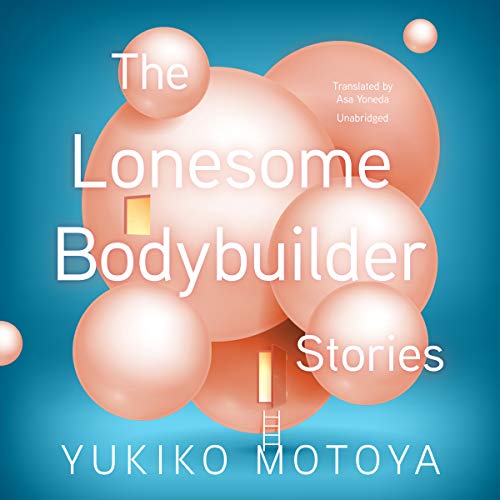 A housewife takes up bodybuilding and sees radical changes to her physique - which her workaholic husband fails to notice. A boy waits at a bus stop, mocking businessmen struggling to keep their umbrellas open in a typhoon - until an old man shows him they hold the secret to flying. A woman working in a clothing boutique waits endlessly on a customer who won't come out of the fitting room - and who may or may not be human. A newlywed notices her husband's features are beginning to slide around his face - to match her own.

In these 11 stories, the individuals who lift the curtains of their orderly homes and workplaces are confronted with the bizarre, the grotesque, the fantastic, the alien - and through it, find a way to liberation. The Lonesome Bodybuilder is the English-language debut of one of Japan's most fearlessly inventive young writers.

I was super excited to hear a slice of life piece about a woman becoming obsessed with bodybuilding. Unfortunately, that story is the shortest one in this collection, and it's unsatisfactory. Although these stories portray female main characters, the characters focus heavily on their awful husbands and they don't have much personality or plot arcs outside of that aspect. Some fun, visceral, and truly bizarre scenarios are described in this collection which kept me listening, but they never have a purpose, conclusion or statement to make. It's almost like long winded poetry about sadly married and repressed women from a repressed woman's perspective. I wish more stories challenging expectations or gender roles existed. The reading voice of this book is really great however. It's soothing if you just want to zone out.

Interesting collage of stories. Real lessons to be learned here. It takes ones mind to a place we need ned to be.