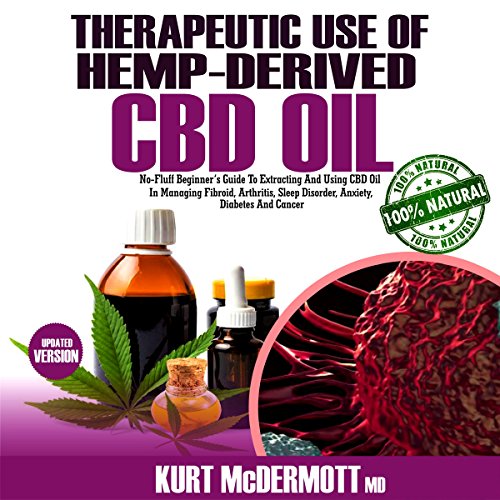 The book is an update to The Amazing Power of CBD Oil and Hemp Oil.

This audiobook provides a practical guide to extracting high-quality CBD oil at home to treat a variety of health issues. It contains a wealth of information that you would need about CBD and other cannabinoids that work with CBD to produce and entourage healing effect.

Cannabis has been in use for thousands of years throughout different cultures for different disorders - anxiety, insomnia, seizures etc. It was around 8000 BC that the hemp plant was used for making textiles, ropes, clothing, etc. In the 2700 BC, Shen Known considered to be the father of traditional Chinese medicine out of curiosity took 365 different plants to check for their medicinal effect. He chewed each of them and made notes of their effect. The experiment lasted over 365 days with some days taken off to recover from the adverse effect associated with some of the plants he took at random. Interestingly, after taking the cannabis plant, he realized the severe pain associated with gout he was suffering from subsided. In 1850, cannabis was part of the United States’ pharmacopeia and was prescribed for health conditions.

In 1935, there were about 28 cannabis therapeutic drugs that were available for doctors to prescribe for their patients. This led to a number of research and development programs until it all went horribly wrong in the mid-1970s by the single negative campaign of a man named Harry J. Anslinger. But today, the medicinal value of cannabis is on the front burner, with a major campaign to take it off the schedule 1 listing. In addition to offering the most up-to-date and comprehensive information on CBD-dominant cannabis therapy for humans, this book is the first to offer guidance for using the medicine for animals, with suggestions for dosage and delivery and useful forms and strains for common health issues in pets.

Typically I listen to fiction books with romance and mystery being my preferred genres. I was intrigued by this book featuring Hemp Oil (CBD). I thought the author (Kurt McDermott) wrote a well researched book that gave good information on how much to take and what types of hemp plant, and even extraction. I would not try the extraction process myself, but found it interesting how typical household items could be used. I think with all of the health benefits from CBD oil, big pharmaceutical companies will get involved.
The narrator (Eddie Leonard Jr) did a good performance. His voice was smooth and articulate. He did not put unnecessary emotions into the reading. I learned several things regarding CBD oil from color, and uses, and different ways it’s taken. I requested this review copy audiobook and have voluntarily written this review.

The research into the potential of CBD oil is still in its infancy. However, if anecdotal evidence is to be believed - it's a panacea. This short book looks at the main uses of CBD oil and its potential with different conditions. It's a great intro to the subject area and very easy to listen to. I am pretty passionate about CBD as I write about it and I am glad to have had the chance to hear this. Please note: I asked for and received a review copy of this. The opinion in this review, however, remains completely my own.