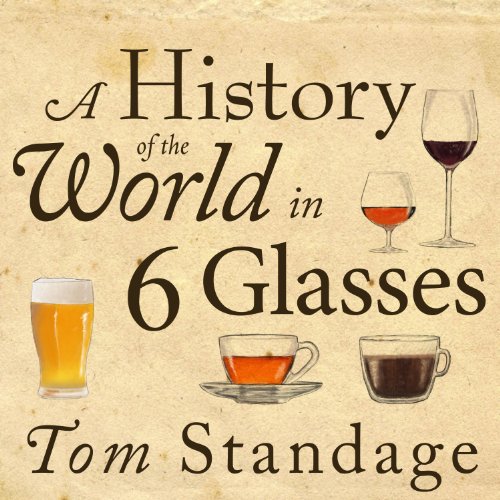 A History of the World in 6 Glasses

The precursor to his equally excellent book on hunger through the ages, An Edible History of Humanity, Tom Standage here charts the developmental course of beverages and their significance for human progress. Standage is really a journalist and a technologist, so A History of the World in Six Glasses is not your average history book. The author is clearly well-researched, but it’s his parlaying of the facts into a cohesive evolutionary narrative that keeps things interesting. Liquid refreshment is an essential part of our existence, and Standage doesn’t simply map out the parallel developments of drink and civilization, but more excitingly, builds a strong case for how each drink has made foundational contributions to its era.

Earphones Award winner and Audie Award-winning producer Sean Runnette does a terrific job of letting beer, wine, spirits, coffee, tea, and cola speak for themselves. Standage has set forth a tone that is highly interested, but not pedantic or overly exclamatory. Runnette knows just what it takes to fade away into the background, neither bombastically lecturing to the listener nor merely monotonously reading Standage’s text. Every pause is justified and every consonant is crisp. This is nothing less than expected from Runnette, who has been in the audiobook business for more than a decade and is the son of Grammy Award-winning producer John Runnette. As the beverage cultures advance, Runnette increasingly recedes, leaving the text to shine on its own surprising merits.

No matter what your choice of drink, hearing more about its influence on the world is actually quite engrossing. Of particular interest is the appendix at the end, where you can learn about exactly which modern beers most closely resemble the ale of yore, which ancient blends of tea are still available today, and so on. Standage also gives us a taste of the future and comes full circle by speculating on the new millennial prospects for water, that most basic of all beverages. An underrated gem of scholarship, A History of the World in Six Glasses is completely worth the listen for all the fascinating tidbits you will soak up and then deliver the next time you’re pouring a glass of wine at a dinner party, or meeting someone for coffee. Megan Volpert

Throughout human history, certain drinks have done much more than just quench thirst. As Tom Standage relates with authority and charm, six of them have had a surprisingly pervasive influence on the course of history, becoming the defining drink during a pivotal historical period.

A History of the World in 6 Glasses tells the story of humanity from the Stone Age to the 21st century through the lens of beer, wine, spirits, coffee, tea, and cola. Beer was first made in the Fertile Crescent and by 3000 B.C.E. was so important to Mesopotamia and Egypt that it was used to pay wages. In ancient Greece, wine became the main export of her vast seaborne trade, helping spread Greek culture abroad. Spirits such as brandy and rum fueled the Age of Exploration, fortifying seamen on long voyages and oiling the pernicious slave trade. Although coffee originated in the Arab world, it stoked revolutionary thought in Europe during the Age of Reason, when coffeehouses became centers of intellectual exchange. And hundreds of years after the Chinese began drinking tea, it became especially popular in Britain, with far-reaching effects on British foreign policy. Finally, though carbonated drinks were invented in 18th-century Europe, they became a 20th-century phenomenon, and Coca-Cola in particular is the leading symbol of globalization.

For Tom Standage, each drink is a different kind of technology, a catalyst for advancing culture by which he demonstrates the intricate interplay of different civilizations. You may never look at your favorite beverage the same way again.

"Standage starts with a bold hypothesis - that each epoch, from the Stone Age to the present, has had its signature beverage - and takes readers on an extraordinary trip through world history." ( Publishers Weekly)

First, it should not be "history of the world", more like "history of the West" at best. Still, very entertaining and it was quite a bit in that I realized I hadn't noticed the performance (I'm usually very picky), the narrator is just that smooth and enjoyable to listen to. Always wonderful when a book talks about tea which is a deep passion of mine.

When I travel long distance by car with my husband we like to share the experience of a good documentary story. This was quite good, covering the mainstays of common beverages: beer, wine, coffee, tea, cola and water. I found the histories as engaging and enjoyable as the drinks themselves.

Wow, what a fascinating book!

Brilliantly researched and expertly narrated. I learnt so many fascinating things.
I recommend this to everybody who is even just remotely interested in the history of their favourite beverages, and it is a must read for everybody who is interested in history! I'm so glad I picked this up when I did, even though I took my time listening to it.

This was smart, entertaining and engaging. An interesting walk through history! I'm glad I read it. # Audible1

Love it after reading "Sapiens" this book complete history of humanity with new details. would recommend

I expected this book to be mostly composed of trivia. Instead I was pleasantly surprised with the breath of historical information it provided. I'm relatively knowledgeable of ancient history, but still most of what this book reports was new to me as nearly all historical accounts gloss over the significant impact these beverages have had in shaping their respective cultures. Thus, this book was very illuminating, well documented, and enjoyable. And the narrator's voice is engaging as well. Highly recommended!

Very informative and full of history that people can relate to on a personal level. I won’t look at a glass of tea or beer again without thinking “Wow, I really know a huge amount about where this came from and the socio-politics that made this drink possible.”
Interesting thing that stuck in my brain was that the Industrial Revolution began around the same time that people stopped drinking Beer for breakfast (not a joke) and switched to Coffee and Tea.

Entertaining but not complete

I really enjoyed this book, and thought the author did a good job, especially when recounting the origins of wine or beer, in tracing the history of these two drinks. And this book is definitely worth listening to, but my disappointment is with the incomplete nature of the book, mostly in the spirits section. Rum and whiskey are given ample time, but what about vodka's obvious influence on Russia and how did that (or did not) impact the kind of societies that developed there? Or tequila and Mexico? What about rice spirits in Asian contents, whether sake or something else? Without touching on these other topics, the work seems slanted to the obvious Western European culture, but we're missing, I assume, some wonderful histories of these drinks in these far flung cultures.

But...the stuff that's in here is nice. I just wish the author would have invested more time in a more comprehensive picture.

Thoroughly recommend this book. Pleasantly read, researched and written. Not too long, but packed full of information. Every chapter is good. Takes you around the world in a brilliant concept. I have a hard time selecting a highlight. But the argument that coffee launched the Enlightenment is very thought provoking. Not too much can really be said. Either you are the kind of person who likes food history, or history told from creative, specific angles, or you are not. Similar to Kulanski with "Salt" and "Cod", or the "Botany of Desire".

Content rich, very informative. Full of 'ooooh' and 'aaaaah' moments.
Great stories to recount over beverages with friends while drinking, you can make uninvited comments about the drink you're sipping and sound like a right wanker... In a good way.

"This is a fascinating lens through which to view history. I was amazed at the impact these six beverages had on the course of human events."

Exciting and unique journey through history

I enjoyed this book, and all the richness of historic information about the importance of the drinks that moved and drove the world. I will never look at a cup of tea, coffee or coke the same way again.

It seemed a bit of an odd premise, to describe the World's history in terms of 6 drinks, but it worked a treat. Starting with beer, the author progresses through wine, spirits, coffee tea and coke and weaves it skillfully into the history of civilisation.

I learnt a lot. (e.g. I was surprised that beer arose so early in our history) and I was also entertained by countless anecdotes about these beverages: How the British navy was stronger and fitter than its rivals because of the serendipitous use of lime juice to flavour and preserve rum (thus preventing scurvey); how coffee houses in London evolved into institutions such as the Stock Exchange and Lloyds of London; how coke was manufactured in a transparent form and packaged like vodka in the soviet era to be acceptable to the Russian communists.

The narrator was pretty good, although he had the annoying habit of rushing the chapter titles so you didn't realise when a new one had begun. Aside from this, the book was one of my most 'listenable' downloads.

An amazing perspective on world history

There is a brilliant insight here...the history of the world as seen through the sorts of drinks that predominate in each time; beer, wine, spirits, tea, coffee, and Coke. It is a story that is absolutely fascinating and wonderfully told.

This is just the sort of book that relaxes you - interesting, new, original, insightful....I could go on, but if you have a notion to listen to this one, just do it. You won't be disappointed.