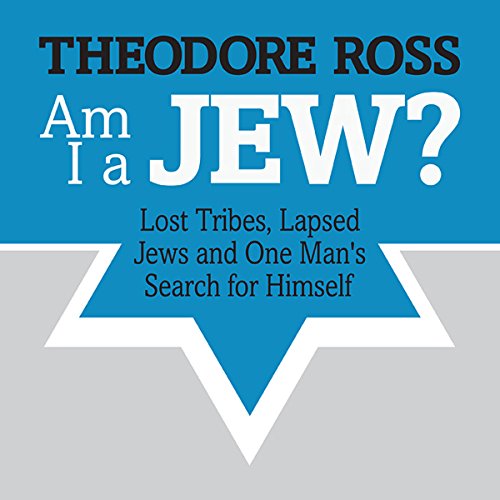 What makes someone Jewish? Theodore Ross was nine years old when he moved with his mother from New York City to the Mississippi Gulf Coast. Once there, his mother decided, for both personal and spiritual reasons, to have her family pretend not to be Jewish. He went to an Episcopal school, where he studied the New Testament, sang in the choir, and even took Communion. Later, as an adult, he wondered: Am I still Jewish?

Seeking an answer, Ross traveled around the country and to Israel, visiting a wide variety of Jewish communities. From "Crypto-Jews" in New Mexico and secluded ultra-devout Orthodox towns in upstate New York to a rare Classical Reform congregation in Kansas City, Ross tries to understand himself by experiencing the diversity of Judaism.

Quirky and self-aware, introspective and impassioned, Am I a Jew? is a story about the universal struggle to define a relationship (or lack thereof) with religion.

I really liked the honesty of the author’s journey to understand his lost Judaism. He delivers the text with good timing and intonation. A very good and recommended book.
However, I would like to clear up some things about the Classical Reform Temple he visited during his travels. The rabbi that he met with has been let go; he now practices at a Presbyterian church with his congregation, and he still seems to put conversion on the front line. He is not recognized by the Rabbinical Association of Kansas City.
Our current Rabbi, Rabbi Londy, has Conservative roots but a Reform heart. He still takes converts, I’m one myself, and he tries to make going to synagogue more interesting. Having services at the Jewish Deli, book clubs, monthly movie nights, etc. Rabbi Londy satisfies both the elder members and recruits the new, younger members. He doesn’t have to use foul language, be coarse, or steal from the discretionary fund to run the Temple.
I just wanted to tell anyone passing through or relocating to Kansas City to come and visit. We’re a warm and friendly congregation.

Are we all Jewish? A book about religious identity

I would give this book three stars, but the research and narration is good and sometimes humorous as told by the author himself. I like how the author narrated his travels and searches, which sometimes had an undertone of pure amazement and other times resentment when encountering a new Jewish group. I did initially think this book was going to be more of a self discovery of becoming a Jew, but, instead is more of a historical/ethnography of Jews within the United States. Possibly the most interesting section of the book was the Crypto Jews of New Mexico, but, I thought this section could have been researched more since it left the listener (and reader) wanting more details.

The book, however, does detail and expose the various groups of Jews within the United States and actually breaks away many misconceptions that protestant Christians or other religions (or non-religious) people may have about Jews. I would recommend this book to anyone struggling with their own religious identity as our author does, and in his own way, comes to peace with it. Shalom

Didn't really work for me

First of all, I was under the mistaken impression that the author was raised a Christian, not realizing his family was Jewish until later -- not so! His mother insisted that he, she and his brother "pass" as Christians in Mississippi where he moved at age nine; he would visit relatives in New York among whom he was Jewish. Later in the book, he hounds his mom along the lines of "How could you DO that!" I did get into his travel narrative-type description of the congregations he visited, and the families he stayed with; however, he lost me when interviewing folks from Jewish organizations. Overall, I found it well-presented as (nonfiction) journalism, but didn't keep my interest.