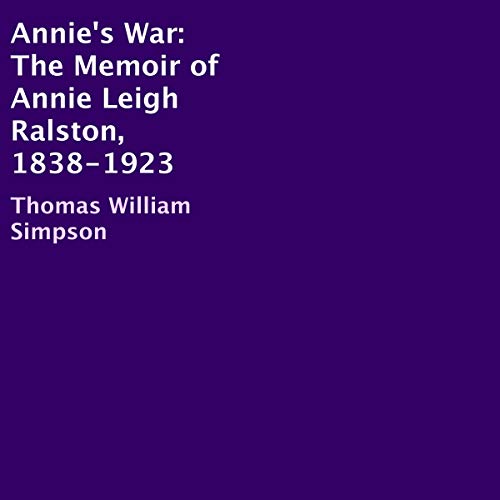 "I am ancient now and half blind and mostly deaf and stove up with rheumatism so bad I can hardly hold a cup. But still my memory is good and my brain as sharp as when I was just a girl out on the farm. And so I have decided to write down everything I can rightly remember so my grandchildren and great grandchildren will better know me and the life I lived and the country where I lived it.

I do not want to leave the job to others to paint my portrait..."

And so begins Annie’s War, Thomas William Simpson’s breathtaking historical novel based on his family’s experiences before, during, and after the American Civil War.

May 1, 1838. A small family farm in central Pennsylvania. A tremendous storm blows up. Thunder and lightning and torrents of rain. Ray’s Creek overflows its banks. In the midst of the tumult Annie Leigh Ralston is born.

Over the next several years Annie’s mother gives birth to three more daughters and four sons. Some survive the trials and tribulations of the age; some do not.

Typhus, cholera, measles, the pox, strep, snake bites, tetanus, and many other maladies stand in the way of Annie and her siblings reaching adulthood. Farm life in the first half of the 19th century did not abide the sick, the weak, or the lazy.

July 3, 1863. Gettysburg, Pennsylvania. Annie's younger brother, a private in the 125th Pennsylvania Volunteers, is shot through the stomach during Pickett's Charge and left to die on the field of battle. Annie travels by train and wagon, and on foot until she reaches her brother’s side. Using homespun remedies and a love of Biblical proportions, Annie nurses the dying boy back to life.

Annie’s War is the chronicle of one woman’s life from 1838 until 1923. But on a larger stage it is the story of 19th century American women stepping out of the shadow of suppression into the dawn of a new age.

Today we have far too little understanding of the severe and repressive lives our great grandmothers led. Annie’s War, a riveting and highly personal narrative, portrays one woman’s struggle for knowledge, respect, and self-determination.

Thomas William Simpson, the author of such diverse novels as This Way Madness Lies, The Ferryman, and The Affair has blended history and psychology with the personal memoir to create a fictional tour de force that will transport you back to a time when America was still struggling through its adolescence.

Evocative and emotionally charged, Annie’s War subtly and forcefully captures the triumph of the human spirit. A masterful narrative not to be missed.