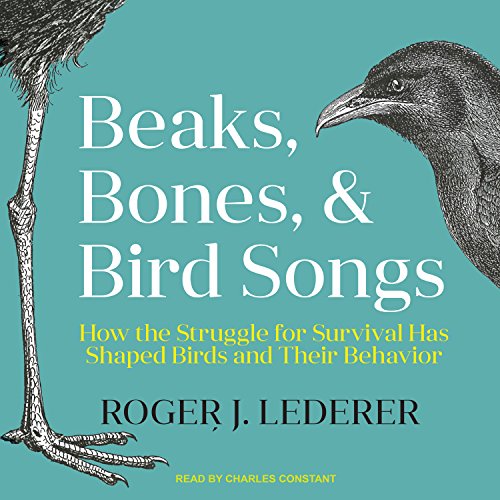 When we see a bird flying from branch to branch happily chirping, it is easy to imagine they lead a simple life of freedom, flight, and feathers. What we don't see is the arduous, life-threatening challenges they face at every moment. Beaks, Bones and Bird Songs guides the listener through the myriad, and often almost miraculous, things that birds do every day to merely stay alive. Like the goldfinch, which manages extreme weather changes by doubling the density of its plumage in winter. Or urban birds, which navigate traffic through a keen understanding of posted speed limits. In engaging and accessible prose, Roger Lederer shares how and why birds use their sensory abilities to see ultraviolet, find food without seeing it, fly thousands of miles without stopping, change their songs in noisy cities, navigate by smell, and much more.

"An exceptional overview of the life, adaptations, and impressive skill sets of wild birds...Highly recommended for all interested in natural history and the impact of humans on the natural world." ( Library Journal)

this book has a ton of great information, but there are parts where it can be so scientifically dense that even I had to take breaks from it. still recommend for bird lovers, but don't expect to binge listen.

Thi is the most informative bird book I've read. I will be reading several sections again.

For those interested in learning about birds,this book compiles the evidence that shows how amazing, diverse, and smart birds can be.

so the good news is the book is filled with information that the common bird enthusiast might not know
it's not even bad news but I just wish there was more information on action plans
what can I do to help and how can I take action?

Too Technical To Enjoy

I am a scientist and bird enthusiast, but I found this too technical to enjoy, I often listen to Audible on my way to and from work, on my work breaks and lunch, but it seemed like every time I tuned in, the topic of discussion was about regurgitation to feed the young. Other discussions explaining bone structure were so descriptive that I felt I needed a diagram to follow his narrative. The author is clearly knowledgeable, but this is more of a reference book for graduate students specializing in ornithology rather than someone who delights in just being a backyard bird watcher.

I really enjoyed this book. I will definitely read it again. it is full of great information.

Full of Facts (to a fault)

There are certainly a lot of facts in this book about birds. For me, though, too many unrelenting facts lined up end to end that the book blurred into sounding like and endless list. Not to say that the facts aren't interesting, but I often found myself being distracted and my mind wandering because the facts seemed to roll on and on to the point of becoming tedious. I just didn't find enough intonation in the narration to make it sound interesting. A bit like someone - a non-actor - reading the Manhattan phone book.

There are interesting things to learn about birds, but the format and narration became tedious at times.

The final part of the book is about the decline of birds through destruction of habitat and other impacts of human activity. I thought it was probably the best part of the book. The syntax was a bit more conversational. And the content interesting in terms of humankind's impact on the shrinking natural world around us.

A Compact and Fascinating Overview of Birds

Beaks, Bones, and Bird Songs (2016) by Roger Lederer is all about its subtitle: How the Struggle for Survival Has Shaped Birds and Their Behavior. Lederer covers Foraging, Sensory Abilities, Flight, Migration and Navigation, Survival Strategies for Weather, Communities, and Human Influence. The book percolates with interesting information on birds in general and on particular species. As he proceeds, Lederer also covers a bit of the history of ornithology, citing earlier landmark studies and explanations of birds that according to contemporary science are either woefully incorrect or still accurate.

Throughout, the main point Lederer repeatedly demonstrates is that birds are amazing creatures of incredible diversity in their habitats, sizes, shapes, physiologies, lifestyles, abilities, and so on. While being perfectly adapted to their environments over millennia and even millions of years, birds’ existence is increasingly threatened and changed by human activity (cities, habitat degradation, hunting, etc. etc.). Everyday life is a struggle for survival which birds negotiate with all their intelligence, learning, and senses, making choices about how and where and when to forage for food, to nest and raise young, and to migrate, etc., all to maximize chances for success and minimize chances for failure. Although he does not push a didactic conservation agenda, he does reveal ways in which humans harmfully or helpfully affect avian life and concludes that “We have to be partners with birds.”

Here are some examples of the interesting things I learned from the book:

Why birds don’t have teeth and how gizzards partially replace them.
How sandpipers detect prey deep in sandy mud without seeing or smelling them.
Why woodpeckers don’t get headaches.
Why vultures defecate on their feet and have bald heads.
How birds see colors and UV etc. and use one eye or both eyes etc.
Why birds sing (it’s not for joy).
How birds fly (including soaring, gliding, diving, etc.).
How flocks and formations work (including how birds in dense flocks avoid flying into each other).
Why some birds migrate (and how they know when to go and how they fly such long distances).
How birds use sun maps, star maps, geomagnetic crystals, olfaction, infrasound, and landmarks to navigate.
How birds adjust their body temperatures to deal with cold and heat.
How and why birds mob (gang up on larger predators).
The Arctic Tern flies to the Antarctic and back, up to 66,000 miles per year, enough for three round trips to the moon if they live full life spans.
Acorn woodpeckers wedge acorns into trees so tightly that no other animals or birds can remove them, so they themselves can later break them open to get the nuts.
If other jays see them hiding their acorn caches, they’ll hide them again later, but only if they themselves are cache robbers.
Babies still in eggs tell parents to turn them right side up or make them warmer etc.
In each ecosystem and niche and guild, each bird plays a particular role in relationships with the other living parts of the environment.
Birds can get drunk on fermented fruit.
Diversity in an ecosystem is necessary, like a sophisticated and complicated watch with many functions and parts: remove enough of the parts and it will finally stop working.
Evolution and natural selection are good at making creatures change to suit changing environments etc., but since industrial revolution the pace of change has outstripped what evolution can do.
Birds in cities develop differently (behavior, color, wing size, song frequency, egg laying, singing, migrating or not, viability, etc.) from the same species in the country.
Global warming is making birds migrate earlier and fly farther north and breed earlier, etc.

Anyone interested in birds should read this book, though perhaps ornithologists and other experts might not find as much new interesting information as I did.

The audiobook reader Charles Constant is professional and smooth, though perhaps he reads a touch more speedily than I’d have liked.

A Layperson-Comprehensible Look at Bird Evolution

This was a quite enjoyable look at today's birds, what factors influenced the evolution of many of their characteristics, and how and why they specialize as they do.

However, I missed hearing samples of the bird songs - I had hoped from the title to be able to hear them.

Not a flight of fancy

Excellent book for both experienced and novice birder. Fascinating details bring greater joy to observing the winged (or not) inhabitants of our world.