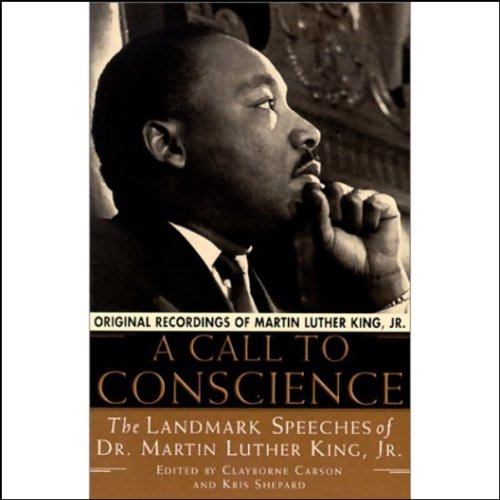 Birth of a New Nation

Birth of a New Nation is a selection from A Call to Conscience, a milestone collection of Dr. King's most influential and best-known speeches. Featuring an introduction written and read by Reverend Leon H. Sullivan.

Compiled by Stanford historian Dr. Clayborne Carson, director of the King Papers Project, and by contributing editor Kris Shepard, A Call to Conscience takes you behind the scenes on an astonishing historical journey, from the small, crowded church in Montgomery, Alabama, where "The Birth of a New Nation" ignited the modern civil rights movement; to the center of the nation's capital, where "I Have a Dream" echoed through a nation's conscience; to the Mason Temple in Memphis, where over 10,000 people heard Dr. King give his last, transcendent speech, "I've Been to the Mountaintop", the night before his assassination. In 12 important introductions, some of the world's most renowned leaders and theologians, Andrew Young, His Holiness the Dalai Lama, Senator Edward M. Kennedy, and Mrs. Rosa Parks, among others, share with you their reflections on these speeches and give priceless firsthand testimony on the events that inspired their delivery.

Expressing a deeply felt faith in democracy, the power of loving change, and a self-deprecating humor, A Call to Conscience is Dr. King speaking today. It is a unique, unforgettable record of the words that rallied millions, forever changed the face of America, and even today shape our deepest personal hopes and dreams for the future.