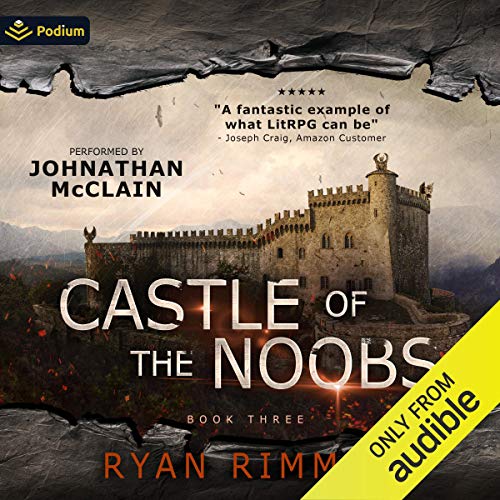 Castle of the Noobs

Jim and his shoulder demon have survived everything the world has thrown at them. So far.

However, there is an encroaching war between two great kingdoms. In between the two armies stands an ever-growing town, led by a Noob.

With goblins, trolls, angry Wargs, and an expanding refugee crisis, will Jim and his companions manage to restore Windfall Valley or have they finally met their match?

Mc is just annoying at this point

I'm sick of hearing about his wife and him being stupid most of time and also feels like much is really happening or very little progression. Why add he used play dnd or any roleplaying game but ask the most basic questions but really shouldn't be asking them since you would know if you played any rpg the only thing that save the story is demon and the badger. Whole wife issues would have been fine if he had move on first book or second book but these is the third book it's just plain annoying at this point. Most of jokes are just getting sad they where funny in first and second book and now just annoying like most of story
I have more problems with mc for one he slow time down but he doesn't use more it's just stupid if at this point he really just a dumb and at this point I would have use a much harsher word if I was demon. And I have more problems with this story at this point the third book but it's still feels like the first book because of so much shitty story progression I won't be getting any more from Author I'm absolutely done with noobtown book mc just to annoying

If you don’t know the spaceball salute it will be one of the high points of this magnifique book. I laughed so hard, I almost piss myself.
Ok, I am a nerd, so what I am not alone, I am sure.

the third installment of the series and still as great, perhaps even better! can't wait for the next one!

Another great addition to the hilarious series. I can't wait to hear the next book!

This book has too many problems to name, so I'll just go through the highlights which ultimately made me give up on the book.

The humour. Everything I'm about to complain about could be waved away with claims of 'satire' or 'humour,' but none of it lands. Ever. In fact the author has several running 'gags' that hang around like a bad stink. Unfunny the first time? triggering the dozenth...

With the following complaints, I'm going to ignore the humour angle and critique them as if they were to be taken seriously, given the humour didn't land for me, that's how they were received. Seriously.

If you're going to write a mind control wizard character, you best make sure you write them to be incredibly subtle and clever. Even with magic, constant use of it to manipulate everyone to be out of character would become incredibly obvious, if not to the target, then to everyone else.

Bashara being able to go around and do her thing without consequence, teasing several times that she's about to get caught then waving it away and moving on like nothing happened...

Her ultimate downfall won't even be satisfying. If she's not caught given how inept and obvious she's being now, the act that'll prove her downfall would have to be so ridiculous that it would begger belief.

This character needed to be handled with subtlety and finesse. Instead she's the psychic spy equivelant of a child lying to their parents.

Ironically, this is an aspect I'm sure I'll differ with most reviewers on. I've NO issue with Jim mourning his family and struggling not to break down when he's constantly reminded of them.

What I take issue with is the 'romance' in the story.

Jim is a reverse widow. He's the one that died, but in effect it's the same thing. He had his whole family taken away from him.

It's been a f*cking month.

Moving on, or hints of romance should be the last thing on his mind.

'You must be gay! Everyone is throwing themselves at you. Jara the healer is head over heels for you! You need to do something!'

What Jim should say and the topic of romance never be brought up again, at least for several years: I'm flattered, but I just lost my entire family, please leave me to grieve.

THEN MOVE ON WITH THE STORY.

Don't keep coming back to it. In every. freaking. chapter.

Finally, Jim being treated like an idiot by everyone and never clapping back.

This one is self explanatory. No one enjoys or tolerates being called an idiot, especially when it's underserved. It feels like every interaction he has with everyone is condescending, and he just grumbles and takes it.

That's not how a real person works.

Hopefully by leaving this review I'll actually remember not liking this series and not buy the next one...

The first 2 books I get to listen to the character develop. Now in book 3 I’m 4.5 hrs in and the character had doubled his lvl in all classes and I haven’t been told what his class choices are. This is LitRPG, or did book 3 switch genre? If this books doesn’t stay true to the genre, which is why I bought it and what I liked about it then I’ll be returning it and quitting the series.

Also, book the MC had a town perk he could have used to bolster the defense of the town and that wasn’t addressed.

Loved the first two books now this series doesn’t want to be LitRPG all of the sudden book 3.

good but tiring with the wife bit

it a good book with a nice storyline but the bits with his wife and kids is overkill. it like almost every chapter that his said something about it

The only thing bad about this series is that i keep wanting more! Excellent work once again.

I get that Jim cant move on, in a month who would be, but why is it every dang chapter, i miss my wife, she reminds me of my daughter blah blah blah. Its not healthy and just painful to listen to, its like hes in a state of shock of his loss of his family, for an entire month incapable of processing the he should be grieving as well instead of wondering if he was grieved. Next the whole "Jim" thing, dude is the most powerful person there, literally saved everyone and they constantly rag on him for his name, its beyond ridiculous, not to mention him just taking it like that is worse. Next Jim being a literal floor mat, getting disrespected in almost every interaction and nearly never standing up for himself, when he finally does stand up its so minor or to a character only mentioned in passing, If this is supposed to be a hero tale, it fails. If it represents a real person then that person may need to seek help, or a spine.

Not on the same level as the first two books

This continuation story was not as focused as the other two books. It tried to address some MC character development issues by giving you a better understanding of the MC's reluctance to let parts of his previous life go. but in my opinion the story fails to clear the stage for the future growth of the MC. On top of all that uneventful mess, there was minimum development in other story arcs. In particular, I found the situation with the New Castle to be completely unfinished but the author's major hint for the next book is to go find Charles for Bagelor. Which I'm assuming will be the reasoning for going into the new Dungeon under the castle. The things in which this book did address well were the development of NOOB Town and it really puts you in touch with some of the other characters. But this is clearly a filler book. Let me be completely honest if the Author put out the next book and that book's mission revolves around finding and killing Charles and it does not contribute to the progression of the MC nor does it address any of the unseen enemies bearing down on NOOB town I will not buy another book in this storyline. I will not buy another filler book.

Yes! He speaks about his wife!

An earlier review whined about the main character talking a lot about his wife. Personally it showed a little more depth to a Litrpg character. No one in a situation like this who suddenly is ripped away from their family is not going to be going through inner turmoil about those they love. If that is all you can focus on maybe the reviewer needs to gain some more emotional depth themselves. This wasn’t as great a listen as the previous two books but I’ve still given it 5 stars as the story, humor and RPG elements are all there in spades. Good book, great voice acting and fun humor. Overall a great experience to listen to!

Another author who thinks their readers are dumb. No character progression. Reads like children's book.

Not as good as I remember

I listened to the first two books a while back and enjoyed them, but this installment was a let down.
Idk if the writing style changed, or if I my tastes changed ...either way I found that I didn't enjoy the "witty banter" ...n that I was annoyed by all the self-loathing MC did about his wife.

Very little/slow story progression. Just a lot of jokes that didn't quite land for me and then a ton of random discussion centered around his wife n his former life.

I'd say I enjoyed 20% of the time, n the rest was just kina blah.
I may give the next one in the series a try, but if its more of the same then I'll probably be done with it.