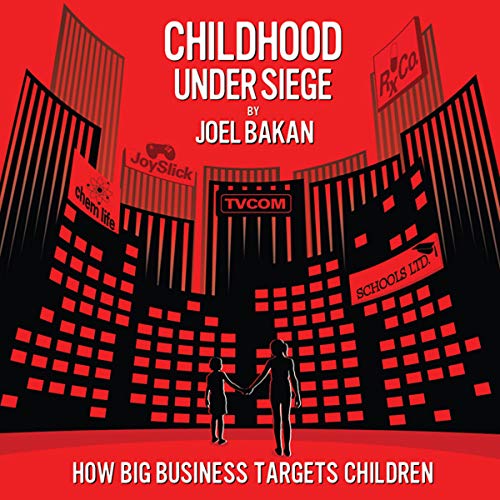 In Childhood Under Siege, Joel Bakan reveals the callous and widespread exploitation of children by profit-seeking corporations and society's failure to protect them. The creator of the award-winning film and internationally best-selling book The Corporation, Bakan shows how corporations pump billions of dollars into rendering parents and governments powerless to shield children from a relentless commercial assault designed solely to exploit their unique needs and vulnerabilities.

Focusing on the United States in particular, Bakan demonstrates how:

"As governments retreat from their previous roles of protecting children from harm at the hands of corporations," Bakan writes, "we, as a society, increasingly neglect children's needs, expose them to exploitation, and thus betray what we, as individuals, cherish most in our lives."

Childhood Under Siege is a call to action to reverse these trends, and provides the necessary insights, information, and concrete proposals to do so.

"Joel Bakan’s powerful, well-documented polemic is just what we need to hear right now, if we are to even begin to reverse the toxic consumerist legacy we are bequeathing to future generations." ( Literary Review of Canada)
"The information in Bakan's book is...stunning....The book sounds alarms about issues that go under most parents' radar." ( USA Today)
"The assault on childhood in our corporate-dominated and profit-driven society, painfully dissected in this penetrating study, is a tragedy not only for the immediate victims but for hopes for a better future. It can be resisted, as Joel Bakan discusses. And it is urgent not to delay." (Noam Chomsky)