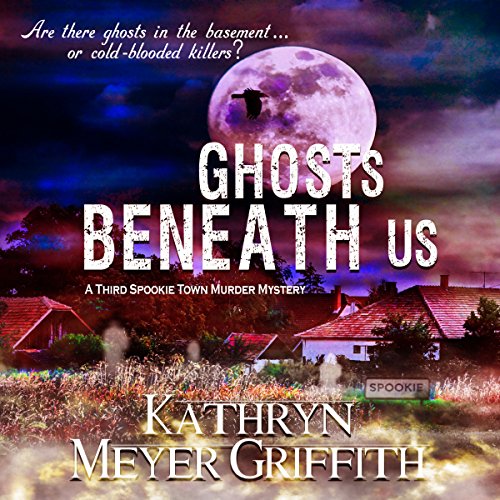 Someone is terrorizing the elderly and vandalizing their homes in a certain neighborhood in Spookie. As usual, Abigail Sutton, a freelance artist, and her boyfriend, Frank Lester, a retired homicide detective, are called in to help find out who's doing these awful acts. The two seem to have an uncanny knack for unraveling mysteries and getting to the bottom of such strange happenings.

Some of the old people think it's ghosts in their basements, in their homes, doing these destructive deeds; but Frank doesn't believe in ghosts while Abigail isn't so sure. Then the old folks begin to disappear one by one or die suspiciously. Frank thinks there's a sinister plan behind the crimes and is determined to uncover who or what is responsible. In the end they, with a little help from their eccentric old friend, Myrtle, must solve the mystery, or more of the old ones in town might end up dead.

Another enjoyable mystery story set in the small town of Spooky. Well written and narrated, it is an easy listening, interesting tale with all the appealing, fun and quirky characters we met in the first two books. This book has our two reluctant sleuths, with a little help from spooks, trying to solve the mystery of disappearing and dying elderly neighbours.

I love the characters in this series. The writer does such a good job with these town people and their quirks you feel you know them. Although the story is somewhat predictable, they are fun to listen to. Keep on writing. It is a nice change from what I usually listen to.

once again another awesome book! couldn't stop listening! very engrossing and narrator had a pleasing to the ear voice

Spooky town is the kind of place you want to live in yourself..great friends and neighbors, fantastic restaurants and a very high death rate...uh, wait a minute... In typical fashion, the author first made me comfortable then scared me to death. Think a more scary version of Murder She Wrote.

The author's overall style is very polished and the narrator has a warm voice that is perfect for this type of book.

This,the third in the Spookie town Mysteries,was a fun book.I enjoyed re visiting the characters.There are old people being killed,houses burning down,etc.The Sherif seems to not care.He says they were old and had an accident.Ghosts are being seen,but are they good or bad?It's funny how even after seeing one,no one believes in them.Jan Kennedy was a fine narrator.“I was voluntarily provided this free review copy audiobook by the author, narrator, or publisher.”