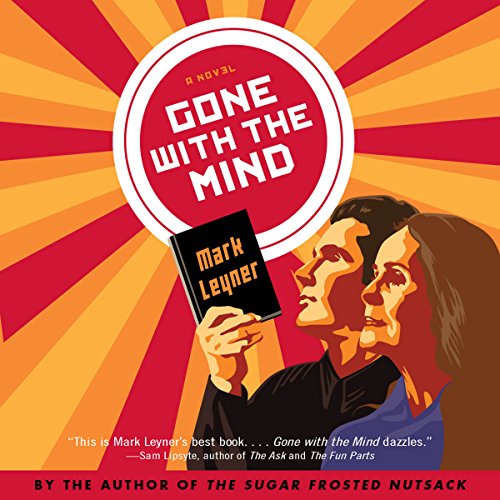 Gone with the Mind

Gone with the Mind

Dizzyingly brilliant and raucously funny, Gone with the Mind is the story of Mark Leyner's life, told as only Mark Leyner can.

In this utterly unconventional autobiographical novel, Mark Leyner gives a reading in the food court of a mall. Besides Mark's mother, who's driven him to the mall and introduces him before he begins, and a few employees of fast food chain Panda Express who ask a handful of questions, the reading is completely without audience.

The action of Gone with the Mind takes place exclusively at the food court, but the territory covered in this audio has no bounds. Existential, self-aware, and very much concerned with the relationship between a complicated mother and an even more complicated son, Leyner's story - with its bold, experimental structure - is a moving work of genius.

"Dazzling, hilarious, heartfelt and entirely-mind-blowingly-original, Mark Leyner's fictional memoir, Gone with the Mind, confirms the author's status as one of the most singular, wild-ass and brilliantly fearless voices in American literature. In prose that is equal parts Roth, Joyce, Scientific American and the Marx Brothers, Gone with the Mind delineates the deep soul and life story of man staring down the barrel of mortality - in the food court of a New Jersey mall. There isn't a convention Mark Leyner does not shatter, nor an aspect of 21st century culture - from robot rape to first person shooter games - he does not reexamine and render fresh. Quite possibly the first literary work of genius-comic and otherwise-of the new millennium." (Jerry Stahl)

A Postmodern Parody of the Disease of Self

What made the experience of listening to Gone with the Mind the most enjoyable?

The narration is fantastic. This is likely even better as an audiobook than as a paper version because we get to hear Leyner's own voice -- and his mother's voice.

I have three completely different (and favorable) reactions to this bizarre and funny book.

1) I don’t think I’m the only one who’s irritated by a tendency in some contemporary post-modern work to deal with what I like to call “the disease of the self.” That is, we get major works that confront self-ness in ways that almost put Proust to shame. There’s a lot to enjoy in Karl-Ove Knausgaard, for instance, and the ambition in David Foster Wallace is impressive, but after a while, I’m frustrated by the unspoken premise: “If you pay attention to me in all my microscopic contradictions and discomforts, you’ll be more aware of your own hypocrisies and inconsistencies. Dive with me into the depths of my self, and you’ll get insight into all of us.” For all its brilliance, I can’t help seeing it as the equivalent of literary selfies.

The trouble with that, I can’t help feeling, is that, for all that we do have in common, we are also very different. I tend to admire fiction that puts our differences into conversation. In fact, that’s how my father and the great critic Mikhail Bakhtin define it: the collision between two or more perspectives through the specific narrative of the story. I’m not arguing for a glib superficiality; stories about multiple perspectives need to excavate those perspectives as full and meaningful selves. And I’m not rejecting the idea that great literature can be obsessed with the self – think of a lot of what Joyce did. Instead, I’m just saying that, for some of the literature earning praise in our moment, there’s too much emphasis on the individual self of the writer.

In that context, Mark Leyner is absolutely brilliant. This weird and wonderful book parodies disease-of-the-self narratives by presenting us with someone who writes a post-modern autobiography – complete with excerpts of various personality inventories and testimony from his mother – with the presumed expectation that others will want to read it. Instead, when he appears at the local mall food court for his part in the “Nonfiction at the Food Court Reading Series,” no one comes. Or, rather, two employees on their break sit at tables in the back and serve as reluctant listeners.

And yet, despite no one’s caring, Leyner (putting himself forward as his own character) keeps on reading. Or, without quite reading, he gives a five or six hour prologue to the work he tells us he’ll read. No one sits waiting for this work, yet it consumes his every bit of energy and creativity. In the loneliness of writing the book, he’s invented an “imaginary intern,” an invisible friend who helps him conceive of and research the autobiography – and who himself eventually tires of the project and leaves Mark entirely alone.

If all that sounds like an easy joke, Leyner is brilliant enough to pull it off. He twists and turns his narrative so often, and he brings new and bizarre lines of inquiry in so skillfully, that the concept never gets old. The spectacle of Mark’s navel-gazing is both pitiful and inspiring. This brilliant, neurotic, clever and (ultimately) humane thinker, never gets old. He really is fascinating, and the book leaves that irony twisting: our journey into his needy self is both a glimpse at someone craving attention and a reminder that none of us has the attention to give to another. It’s a parody of one postmodern impulse, and, in its humanizing of the need for one man’s wanting to be seen, it really does invite the rest of us into a fresh new conversation.

2) The trope of the Jewish mother as ‘smother has been done. Whether you locate its roots in Philip Roth, Bruce Jay Friedman, or Woody Allen, you have to recognize it as a cliché: the Jewish mother can see no wrong in her little boy and, as a consequence, she’s responsible for everything that’s gone wrong with him. Far less skilled writers have kept it going, and we’re left with awful examples of it in, say, Howard Wolowitz’s mother in The Big Bang Theory, or Evelyn Harper of Two and a Half Men (who, not Jewish, is written by the Jewish Chuck Lorre).

Here, though, Leyner, revisits that trope. Instead of demonizing his mother, he explores her sacrifices on his behalf. He finds her his best friend and, slowly but beautifully, his best critic. They may have impeded each other throughout their lives, each keeping the other from developing in other independent ways, but they have also built something together.

In what I think of as the climax of the book, the two of them find themselves in a bathroom, looking for faces in the cracks on the floor. She wants to see his imaginary intern, wants to enter that fully into his imagination, but she can’t. Or he won’t let her. Either way, the two genuinely embrace each other, and he discovers that his voice is largely hers; he discovers (as he’s talked of in his imaginary video game) that his ideal is to be united with her, but to be united in his own, full self. He doesn’t want to erase his life, and he doesn’t blame her for his failings. He just flat out loves her. And that’s a refreshing take on a now too easy cliché.

3) Or, I can say flat out that this is one of the funniest books I’ve read in ages. Forget context if you want: this book never goes more than a handful of pages without offering something profoundly funny, without making you laugh out loud. It’s a stand-up routine so smart, so well-conceived, that you could probably pick a random page and find yourself fully entertained.

Leyner knows what he’s doing, and it’s absolutely worth checking out.

Most interesting man in the world, and his mother.

Hilarious, profound, puzzling, inane, touching, tedious, and lyric, all at the same time. If you're familiar with Leyner, this is certainly Leyner-esque, but with a level of intimacy and tenderness that I haven't seen in his work before.

If you're new to his work, this is a great place to start. It's certainly an unconventional book, but please give it a chance. It doesn't really go anywhere, while simultaneously going pretty much everywhere. His writing is endlessly digressive, even rambling, but the performances by Leyner and his mother are so straightforward, that you feel as if you're listening into the interior monologue of the most interesting man in the world, and his mother.

I really, really loved it.