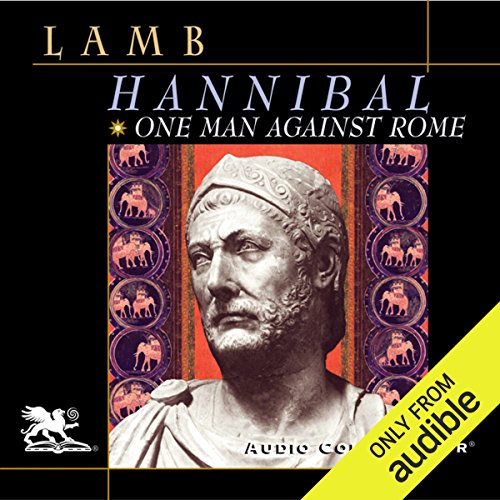 This is the breathtaking adventure of the great Carthaginian general who shook the foundations of Rome. When conflict between Rome and Carthage resumed in 219 B.C., after a brief hiatus from the first Punic War, the Romans decided to invade Spain. Eluding several Roman legions sent out to intercept him in Spain and France, Hannibal Barca astoundingly led his small army of mercenaries over the Alps and thundered down into the Po Valley. The Carthaginian swept all resistance from his path and, as one victory led to another, drove a wedge between Rome and its allies. Hannibal marched up and down the Italian peninsula for 18 years, appearing well nigh invincible to a Rome which began to doubt itself for the first time in its history.

This violent and exciting narrative will thrill you with the accounts of heroism and brilliance displayed on both sides as the war raged mercilessly across the entire Western Mediterranean. Learn how the patience of Fabius Maximus and the genius of Lucius Cornelius Scipio finally turned the tide in this, the world's first "global" conflict...a conflict whose aftermath proved to be one of the most decisive and enduring events in world history. And finally, learn the secret to the success of Hannibal, the most brilliant military commander of all time.

For everyone and no one

First off, its important to say that the headline...for everyone and no one is meant to be very simple, The story of Hannibal is something special, without equal, not everyone will be able to grasp the beauty and and grandeur of his story, the names, the places, that particular time in history need a warming up to, someone interested in the life of Hannibal should make themselves familiar before simply listening to this audio-book.
The story and voice over was great, I was completely gripped by the depth of this book. I have always revered Hannibal as one of the most extraordinary men of all history. The life of this great man has not been forgotten because it is so great. He deserves the reverence placed upon him, Harold Lamb did an incredible job in writing this book and anyone familiar with this particular time in history will certainly enjoy this great story of histories greatest man.

Not Just Elephants in the Alps

This book on Hannibal is riveting. It gave the background and exciting details of the second Punic War, making understandable the actions of both the Roman and Carthaginian sides. The reader is superb, changing his voice as needed when he is quoting Hannibal. Even Scipio Africanus and Cato become more than stick figures from Latin history in this history. I highly recommend this book.

Fascinating - not to be missed!

One word describes this comprehensive look at a man who was, arguably, the greatest military leader in history...Fascinating! In "Hannibal: One Man Against Rome" we learn the reasons that compelled Hannibal to wage unending war against the Roman state, how he accomplished truly remarkable feats of leadership, why his army followed him into battle against overwhelming odds, and, perhaps most importantly, insights into Hannibal's psyche that led him to attempt these campaigns.

Written with the clarity that comes from painstaking research we gain a glimpse at the true man, rather than the character. Read with poise, humour and understanding, this is an audio experience not to be missed.

Fascinating story... but I needed a map.

First off, let me say that I found this to be an excellent book and a fascinating story that was well read. It definitely piqued my interest in the ancient history of the Mediterranean area.

One comment I will make is that if, like me, you are not up to speed on your ancient history and map of the world, you may need to do a Google search on the Punic Wars and the area maps to get the most out of the book.

Fortunately, there a several web-sites with the above information. Once I had a map of the area in my mind so that I could better follow Hannibal's journey, I thoroughly enjoyed the book.

really brings a bit of history to life

Most compelling about this primer; It lends the sense that you have actually been transported from mere scholarly observation into an active appreciation of Hannibal's truely fascinating struggle against the growing strength and domination of Rome. In part this is due to a superb performance by the narrator, but largely reflects facility of subject by the author and in consequence lends credibility, justification and motive to the actors in this history. This is not a mere recitation of forgetable trivia yet you will be surprised by the intimacy with which you gain knowledge of even the various city states and minor generals whose roles played keenly. As a worthwile use of your time, I give this a 4/5 but it would have been a 5 if not for the author's unabashed sympathy for Hannibal and his city of Carthage. A great starting point for anyone looking for a first book to prime their interest in history as well as seasoned veterans and students looking for some meat on the bones of history; both easy to digest and highly educational.

Simply this was the best Audible book I have heard. The author and narrator make this effort a true enjoyment. This is a complex story about a complex man in a complex time, told in a simple straight foward manner. If you are a history reader, this is a must.

Such a wonder of a human being!

I agree with and recommend the reviews below. One thing to add is that Hannibal was such an example of a capable human being. He protected is country from attack for many years, kept the bloodshed to a minimum while he was doing that, and was was simply so intelligent in surviving. Who else could have surprised the Romans with a devastating attack on a wide open plain? He even knew how to handle the situation of his own people turning on him in later years. His retirement itself could be a novel.

But he was not just a man of war. He saw the terms of defeat demanded by the Romans were inalterable, and then convinced his people to accept them, and not be foolish.

Then he reorganized the very economy of Carthaginian society so his countrymen could meet those terms and so avoid destruction of their city. Without Hannibal's leadership that would not have happened.

Hannibal was able to secure the cooperation of great varieties of peoples to secure Carthage against the Romans.

get yourself a map of italy and even better a schematic of the battles. It is hard to picture some of the info w/o it.
This work illusidated an interesting part of history that most people gloss over. I would highly recommend it for
any military soul looking for a superb leadership example.

be warned of the sound effects between chapters. I thought my stereo had gone nuts!

Harold Lamb has made a cottage industry of writing about great generals, some others of which are available on Audible.com.

Although Hannibal saw defeat in battle, he destroyed army after army sent against him by Rome. These armies were formidable, well drilled, and arguably the best fighters of the era. Hannibal by contrast cobbled together armies consisting of undersupplied Carthaginians, mercenaries, and fickle locals. Through the use of artifice, cunning, and superior tactics, Hannibal won every battle fought in what is now Italy.

If you are a history buff like I am you will find this book spectacularly refreshing. Written and read in a transformingly realistic tone, you can almost envision yourself climbing the Alps with the feared general as he campaigns against Rome! It is a must read for lovers of Ancient History.

A Great Lesson in Maximizing Resources

I knew very little about Hannibal, save for his march across the Alps with a few elephants. Everything else regarding him was obscure to me. But this book opened up the panorama of brilliance and dogged determination that is Hannibal.

Though doomed from the beginning, Hannibal played the losing hand that was dealt him in the best way it could have been. He made no mistakes of his own. Had his homeland the same level of committment that he did, the world would look very different today. Rome would have remained a backwater republic, hardly worth a second look.

I think this book would make a good listen for any leader of business. Those ready to throw in the towel would do well to take a lesson or two from a truly great general who not only understood how to win a battle, but the hearts and minds of men - both being necessary for success in leadership.