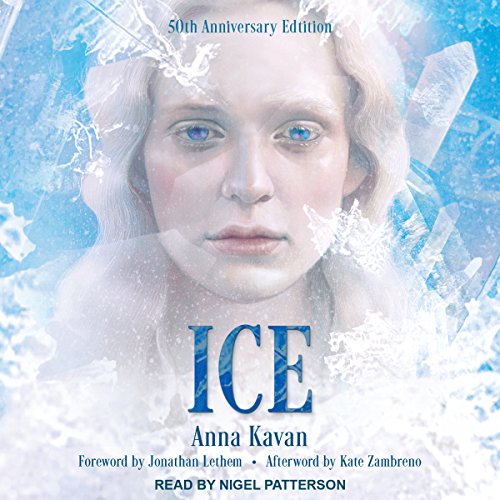 In a frozen, apocalyptic landscape, destruction abounds: great walls of ice overrun the world and secretive governments vie for control. Against this surreal, yet eerily familiar broken world, an unnamed narrator embarks on a hallucinatory quest for a strange and elusive "glass-girl" with silver hair. He crosses icy seas and frozen plains, searching ruined towns and ransacked rooms, all to free her from the grips of a tyrant known only as the warden and save her before the ice closes all around. A novel unlike any other, Ice is at once a dystopian adventure shattering the conventions of science fiction, a prescient warning of climate change and totalitarianism, a feminist exploration of violence and trauma, a Kafkaesque literary dreamscape, and a brilliant allegory for its author's struggles with addiction - all crystallized in prose glittering as the piling snow.

Kavan's 1967 novel has built a reputation as an extraordinary and innovative work of literature, garnering acclaim from China Mieville, Patti Smith, J. G. Ballard, Anaïs Nin, and Doris Lessing, among others. With echoes of dystopian classics like Ursula Le Guin's The Lathe of Heaven, Kurt Vonnegut's Cat's Cradle, and J. G. Ballard's High Rise, Ice is a necessary and unforgettable addition to the canon of science fiction classics.

"A writer of intense imagination.... Slippery, bizarre, and meticulously written.... A gripping and uniquely strange work of science fiction." (Kirkus)

I read it twice and did not understand. Listened once and I'm much closer. Embrace the unreality: especially if you already like Kafka.

Mr. Patterson does a fine job guiding you along and, unlike many readers, injects emotion into his performance without being underdone or forced.

There are few other works I've listened that match the imagery of Ice, reminiscent of someone like Zola or Poe.

Nigel Patterson as narrator m made me try this book. The story seemed intriguing. Reviews were solid.
Never have I been so alienated by a story. Didn't make it past 6 chapters.
I actually became aggravated by it...most odd.
Just not my cuppa.