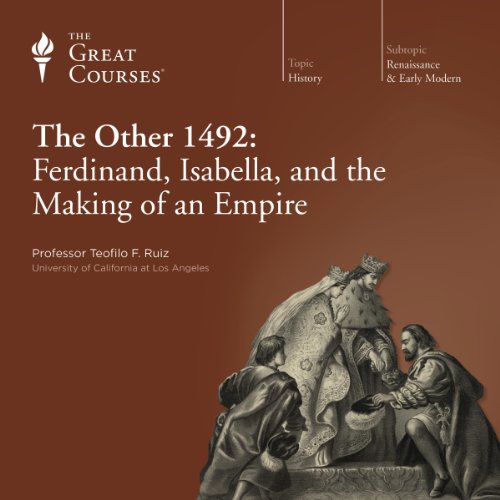 The Other 1492: Ferdinand, Isabella, and the Making of an Empire

Ask anyone about the significance of the year 1492, and you're almost certain to hear something about Christopher Columbus and the discovery of the New World. But there is also a perspective on 1492 far different than the one most of us know - one that is more complete and complex. A 1492 when there was no country called Spain and no language called Spanish. A 1492 whose biggest event - in the region that would eventually become Spain - was the surrender of the last Muslim stronghold, Granada, with the subsequent Edict of Expulsion that gave Jews three months to either convert to Christianity or leave the Kingdom of Castile and the Crown of Aragon.

This 12-lecture series uses the year 1492 to examine the events that made Spain a country and an empire. It examines the centuries of developments that led up to that pivotal year in Spanish history and the consequences that followed for both Spain and the New World, presenting Spanish history from the perspective of both the victors and the defeated: the Muslims, Jews, and New World natives for whom 1492 was not a time of wonder but of terror and despair.

Ce que les auditeurs disent de The Other 1492: Ferdinand, Isabella, and the Making of an Empire

Prof. Ruiz does a great job of explaining how diverse Spain was at the time that Ferdinand and Isabella united the Iberian peninsula (he discusses regional and religious differences) and how that diversity continued and shaped "Spanish" policy. In particular, he does an excellent job explaining the policy differences pursued in Castille and Aragon.

I also have to say that Prof. Ruiz's lectures were first time I have really heard the history behind the development of the latifundio system and the office of the corregidor (two key concepts for understanding Latin American history). Usually, books about Latin America give these concepts short shrift and simply note "they came from Spain". Hearing why they were developed and what their function was in various parts of Spain was very enriching.

An extraordinary history about the truth of 1492

Great attention to separating the myth of the discovery with the reality. The not so glamorous creation of a world wide empire by chance, fate and a lot of luck. And it all started with the Reconquest of a peninsula facing the Atlantic Ocean. One of my favorite audible books in my history books collection because so much detail, and trivia facts, that makes the discovery of America parallel to the first moon landing. Professor Ruiz is so engaging in his love for separating the fictional accounts from reality that you don't want him to stop. What was made popular in movies and schools is shown against the not so glamorous truth, most times without Hollywood-LIKE happy endings. I hope he continues this into a series!

Facinating details of a rich history of the past

The narrator was wonderful in how he presents this wonderful rich history
great detail and wonderful experiances presented.

I really enjoyed listening to this lecture and plan to listen to it a second time as well. There is a wealth of information. Some listeners may not like all the context he provides, but I did.

everything was going fine until the lecturer reached the subject of Columbus. Wow...this guy hates Columbus, unfortunately to the point I actually felt sorry for the lecturer to let a historical figure irritate you that much.

Professor Ruiz is a true expert and his lectures are very clear. He does have a Spanish accent, but you get used to it after a while and, of course, it's to be expected since this is about Spanish history. I wish it were not so short and that he had time to discuss in greater depth some important events that only get touched upon here, such as the Inquisition. But it's a great introduction and provides a good background for further research.

Professor Ruiz, masterfully weaves political, cultural and sociological components of 1492 Spain and into the early 16th century. He addresses the obvious parts of history we know but also a few of the uncomfortable yet necessary contradictions in how the Spanish monarchy dealt with religion, regional challenges and the new world.

Great intro/orientation, in depth progression but easy to follow. Many facts of interest not commonly known. Highly Recommended, enjoyable lecture.

Would you try another book from The Great Courses and/or Professor Teofilo F. Ruiz?

Has The Other 1492: Ferdinand, Isabella, and the Making of an Empire turned you off from other books in this genre?

Who would you have cast as narrator instead of Professor Teofilo F. Ruiz?

Disappointment, l like the topic, the delivery is bad, also the ongoing effort to talk about his other works is trite.