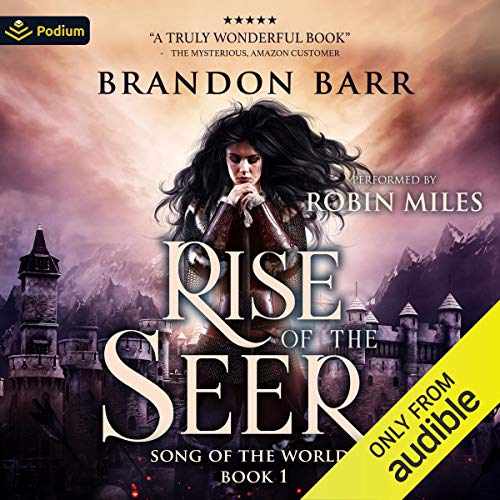 Rise of the Seer

A god-gifted young woman is chosen for a grim task - one that will take her beyond the boundaries of her own world. Winter’s chilling visions of the future make clear that her choices will not only affect the success of her mission...but whether those she loves will live or die.

On the distant world of Hearth, Meluscia is the daughter of a dying king. As he wages a bitter war in the north, a growing evil devours the villages of the east. She would turn her kingdom’s forces to face the emerging threat - but first, she must gain the throne...and confront the secret desire that torments her soul.

Though worlds apart, Meluscia and Winter’s destinies are bound together by portals and an ancient prophecy that promises to pull friend and foe together in a devastating collision.

An excellent choice for fans of Anne McCaffrey and Terry Brooks.

I wanted to love this book.
I did not.
I didn't hate it. It was a good book,
But,
We have two main storylines, and they're both so far removed that it's hard to get too far into one of them. They don't connect at all, and to top it all off, it seems like they're taking place on two different worlds. The title, Rise of the Seer, implies the book revolving around the Seer, but we only get her every few chapters, then we go off on another storyline. It made it hard to follow at times. The world building was there, and characterization was there, but it was too hard to get too connected to one of the characters when it kept switching back and forth. Because of that, I was never able to get too attached to any of the characters.
That being said, the story is still well told, and there is a lot of world building, and the characters are distinct. It's still a worthy read, but it looks like you may want to hang on for the whole series to really get all the plot threads to come together.

Okay, narrator first.
She was very good. A few of her inflections seemed a bit off and her male voices left something to be desired, but all in all her performance was excellent.

Now for the story. Where do I even begin?

Prior to this, I probably would have said Chris Pierson's Chosen of the Gods was my favorite book of the year. But Brandon Barr has completely blown me away.

I'm not going to tell you what the story is about because, frankly, I still haven't figured it out!

This story has an immense, grandly epic feel and I honestly couldn't tell you where the story is going.

What I can tell you is the worlds are vivid and visceral, the intrigue is nail-biting, and the characters are fresh and real and you can't help caring about them and the awful things happening to them. The dialogue is real and honest and sounds just like something you would expect to hear in a historical fantasy setting. And best of all, the writing itself is smooth and clean and beautiful without being tedious.

If I had to put this in a box, I would call it Game of Thrones with a splash of Dune, but with better writing than either of them.

Basically, no matter what you enjoy, read this damn book!

Just a footnote, my one Itty bitty complaint is I do wish the book had just a little bit more closure at the end. I know it's a series and I know much of it is ongoing. I just would have liked a bit more of a clean resolution.