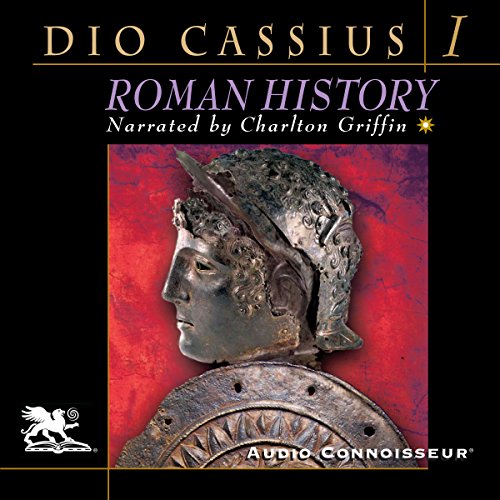 Dio Cassius was a Roman statesman and historian of Greek origin. He published 80 volumes of history on ancient Rome, beginning with the arrival of Aeneas in Italy. The volumes documented the subsequent founding of Rome (753 BC), the formation of the republic (509 BC), and the creation of the empire (31 BC). The history continues until AD 229.

Written in ancient Greek over a period of 22 years, Dio's work covers approximately 1,000 years of history. Many of his 80 books have survived intact or as fragments, providing modern scholars with a unique perspective on Roman history, particularly the period of the empire from Trajan through Alexander Severus. The first 36 books are fragmentary to one extent or another, especially books 30 through 35. Beginning with book 36, Dio enters into a very detailed history that commences with the rivalry of Sulla and Marius. It then follows the career of Julius Caesar. This volume ends with book 49 and the increasing friction between Mark Antony and Octavian. Please note that book three is no longer extant.

Charlton Griffin is amazing as usual!

Only my second attempt at source work. I found it interesting to hear opposing views to many of the works I have read from modern authors. I found myself lost often with the names of locations and had to search for maps to help me.

However, I did expect this to be beyond my knowledge base but that’s how you learn and didn’t distract from my enjoyment. Mr. Griffin is truly a gifted man. So impressed am I that I sometimes search for his name before the author. He can bring a speech alive. I have listened to Julius Caesar’s Commentaries several times and will again I’m sure because Charlton Griffin is Julius Caesar in my view.

My reading and now listening of Roman History is only a few years old. I truly am enjoying this journey first sparked by Podcasts. Thank you Mike Duncan “The history of Rome podcast” and author of The Storm Before the Storm. I’m 70 years old and this old dog is learning a new trick.

This book would certainly not be my recommendation as a starting point but should be on your list.

I really enjoy mr griffin's narration and style...
I was hoping he would do dio cassius and he finally did...Thank you...

Painful to listen to. A flurry of names without dates or context. I can’t do 30 hours of it.