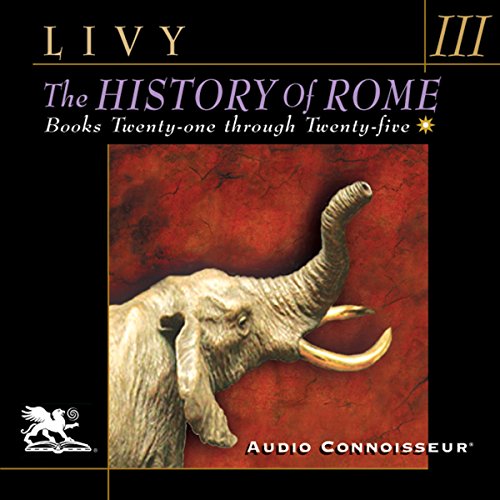 The incredible saga of Hannibal and his invasion of Italy in 218 B.C. is the subject of this third volume of Livy's magnificent history. As only Livy can describe it, we are swept into the era of the Second Punic War and given a ringside view of the leadership of both sides. The stirring account of Hannibal crossing the Alps, the brutal description of Cannae, and the relentless Roman siege of Syracuse are some of the highlights of this remarkable story.

Never has the undaunted courage of the Roman soldier been more fully accounted for, and never has the language of history been more dramatically set down as it has in the searing pages of Titus Livy. The Hannibalic War lives on in this mighty epic of ancient literary history.

Livy's The History of Rome continues in an additional three volumes.

Haste is improvident and blind.

"But in war nothing is so slight as not at times to bring about a great result."
- Livy, Book XXV. xviii 3

Here are some of his best lines from Book 21 and Book 22:

"Never was the same nature more adaptable to things the most diverse -- obedience and command" (Book XXI, iv 3)

"We bring you here both war and peace; choose which you will!" (Book XXI, xviii 13).

"And I fear nothing more than this, that when you have fought, it may seem to have been the Alps that conquered Hannibal" (Book XXI, xl 10).

"Their position, he said, was one from which vows and supplications to the gods could not extricate them, but only their only their own brave exertions:" (Book XXII, iv 2).

"For himself, he would not anticipate, before they ripened, those plans with which circumstances provided men but which men could not well impose on circumstances." (Book XXII, xxxviii 11).

Books 23 through 25 (216-212 BC). details the post-Cannae battles, spread between Greece, Spain, Italy, and Sicily. Hannibal always seems one day, one step, one coin-flip away from destroying Rome, but somehow MOST of the alliances stay. The elites in the cities allied to Rome seem more inclined to Rome, while much of the populace seems to favor Hannibal.

My favorite part of this book is the details concerning the "unrivaled art" of Archimedes' many defense of the walls and fortifications of Syracuse - and eventually -- the needless death of Archimedes. The fall of Syracuse is one of those war-time events that has long-term, significant impact on the world. Much of Roman fascination with Greek culture came as a direct result of the sack of Syracuse. Anyway, again I love a good war story and the Second Punic War has to be one of the top 10 most influential and interesting wars. I also love how Livy throws all sorts of marvels, signs and portents throughout all three of these books: an ox spoke, a spear moved, a baby in a womb shouted "Hail Triumph", a woman became a man, palm took fire, swarm of bees in the forum, lightening, ravens in temples, chalk rain, bloody-looking rivers, terrible storms, a stone seems to fly, the sun is red, almost bloody, snakes appearing and eating the livers of sacrifices - twice.

"In fact you must either have a king -- save the mark! -- or a senate, the only deliberative body in a free state" (Book XXIIII, iii 5)

"For not to be defeated by Hannibal was a more difficult thing that it was later to defeat him." (Book XXIII, xvi 16).

"...many things which are naturally difficult are solved by ingenuity." (Book XXV, xi 16).

"...not even hunger, which, as he said, inflames even dumb brutes, could spur their diligence;" (Book XXV, xiii 7).

Would you try another book from Titus Livy and/or Charlton Griffin?

I love history, especially military history, but did not enjoy this classic by Livy very much because of the performance. Mr. Griffen's style seems to be to read as fast as possible with little inflection. He reads as though he is simply trying to get through the book quickly rather than trying to breathe life into this ancient text. He is capable of reading impressively fast, but he is very hard to listen to. He brought to mind the speed talker from the old Fed Ex commercials.

Would you be willing to try another one of Charlton Griffin’s performances?