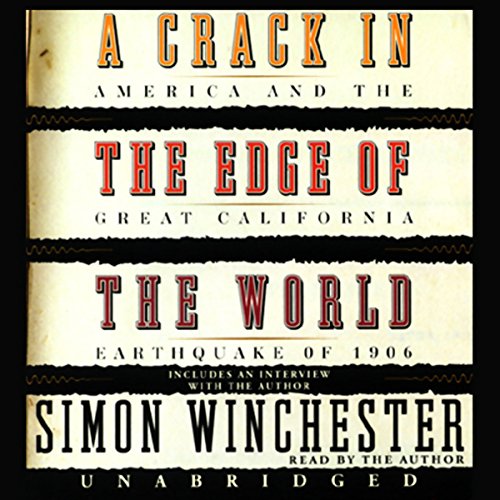 A Crack in the Edge of the World

San Francisco Earthquake that leveled a city symbolic of America's relentless western expansion. Simon Winchester has also fashioned an enthralling and informative informative look at the tumultuous subterranean world that produces earthquakes, the planet's most sudden and destructive force.

In the early morning hours of April 18, 1906, San Francisco and a string of towns to its north-northwest and the south-southeast were overcome by an enormous shaking that was compounded by the violent shocks of an earthquake, registering 8.25 on the Richter scale. The quake resulted from a rupture in a part of the San Andreas fault, which lies underneath the earth's surface along the northern coast of California. Lasting little more than a minute, the earthquake wrecked 490 blocks, toppled a total of 25,000 buildings, broke open gas mains, cut off electric power lines throughout the Bay area, and effectively destroyed the gold rush capital that had stood there for a half century.

Perhaps more significant than the tremors and rumbling, which affected a swatch of California more than 200 miles long, were the fires that took over the city for three days, leaving chaos and horror in its wake. The human tragedy included the deaths of upwards of 700 people, with more than 250,000 left homeless. It was perhaps the worst natural disaster in the history of the United States.Simon Winchester brings his inimitable storytelling abilities - as well as his unique understanding of geology - to this extraordinary event, exploring not only what happened in northern California in 1906 but what we have learned since about the geological underpinnings that caused the earthquake in the first place. But his achievement is even greater: he positions the quake's significance along the earth's geological timeline and shows the effect it had on the rest of 20th-century California and American history.

A Crack in the Edge of the World is the definitive account of the San Francisco earthquake. It is also a fascinating exploration of a legendary event that changed the way we look at the planet on which we live.

"In this brawny page-turner, best-selling writer Winchester (Krakatoa, The Professor and the Madman) has crafted a magnificent testament to the power of planet Earth and the efforts of humankind to understand her." (Publishers Weekly)

Simon Winchester goes into great detail in the book, as he does in his other books. And, as the description indicates, this covers far more than the 1906 San Francisco Earthquake.

Winchester ensures that readers of this book understand the context in which the 1906 earthquake occurred by giving extraordinary detail on the history of earthquakes and our understanding of them, the history of San Francisco (up to 1906), and detailed look at the mechanics of the San Andreas Fault.

The Publisher's Summary above clearly shows this is more than just a look at one particular earthquake. The excerpt from Publishers Weekly also describes this as more than just about the 1906 earthquake. Based on those descriptions, and after listening to the book, I have to say that I got everything I expected... and more.

Simon Winchester is the narrator for his book and does an excellent job.

That's how long it takes for the author to get to the actual story of the San Francisco earthquake. Yes - that's right almost 8 hours!

I would love to write a review that says - "what a great book", but I honestly can't. I read "Krakatoa" last year, and liked it so well I gave two copies as Christmas presents, however my one complaint about the book was the ratio of background material to the actual story that the book was supposed to be about.

In this book, the problem reaches EPIDEMIC proportions. Probably 1/4 of the book deals with the 1906 earthquake directly. The rest is Simon's travels around the US to other seismically active regions, commentary on the Chinese immigrants in San Francisco, the history of the Pentecostal movement in the US, etc..... If you read reviews on Amazon.com, even those who like the book comment on Winchester's meanderings (often without a clear direction toward a given point).

I don't care how many degrees from Oxford the man has. What this man needs is a good editor - one that will tell him that his endless ramblings will turn off many readers who will put the book down, rather than endure 2/3 of the book until he gets to the point.

When he does get to the point (finally) some of the material is interesting, however, the lack of human interest stories is really a downer.

A major disaster like the San Francisco earthquake can surely justify a book of this length, however Winchester must believe that 3-4 chapters of the book are sufficient.

Sadly, this will be probably be the last Simon Winchester book I read.

I truly enjoyed this great piece of California and world geological history. Extremely well researched, well presented and researched. If you have every been through a California earthquake like I have (Loma Prieta, 1989) and watched your chimney come down, and 2 feet of water shoot out of your pool, your refrigerator bounce to the center of your kitchen, and all of your good california wine come crashing to the floor then this book will be a great listen!!!!

Having already listened to Winchester's Krakatoa, I was a bit disappointed to discover that the first half of this book covers much of the same ground, or rather background, in relating the history of geology and the development of the theory of plate tectonics. Indeed, the history given in A Crack at the Edge of the World is more extensive than in the earlier work. It is interesting stuff, especially if your interests in history include the history of science (and quite recent history at that), but I found myself thinking often during the first several hours, "When are we getting to the San Francisco Earthquake?" This feeling is caused in no small part by the fact that Winchester's introduction, telling the story of four "first person" experience of the first moments of the great quake, really whets the appetite.

When he finally gets to the quake and its aftermath, however, the story really begins to move. I've visited San Francisco a number of times, including twice in the last two years, but really had no clear idea of the extent of the earthquake, the damage it did, and the massive response of government and the private sector to rebuild the city. That last point is worthy of note, and this book (or at least the latter part of it) should be required reading for all the public officials, local, state, and federal, who botched the response to Hurricane Katrina.

I've rated the book only 3 stars (I'd give 3.5 if the system would let me), because I do believe the "history of geology" section is a bit too long and too technical at times. But the second half of the book is a solid five star effort.

Captured by science dressed as a yarn. . .

I was hesitant to try this reading since I thought it might be an attempt to cash in on the century anniversary of the San Francisco earthquake. In fact, after having finished this wonderful book, I think the editor might have convinced the author to bend the story toward this earthquake, but the book stands beautifully as an understandable description of geology as it relates to plate movement worldwide. Unlike some other reviewers, I found the author to be the perfect reader and the story interesting, as it weaves the San Francisco event into the facts of our earth and our western America history. This book has convinced me to try another by this author. I rated it a four rather than five only because I save my five-star ratings for books which I feel will stand as classics. This is rather a book which used science as we know it today to relate to history, and did so in a way which captured me, but which I probably will not revisit as I do the classics.

Winchester's books are always fascinating, and his droll reading always enchants me. Here he captures the many facets of geology, social development, economics, geography, population, etc., that bring a locale to life.

I live in Hawaii, amidst earthquakes and volcanoes, and he intimates the mystery and attachment to the core of a region that can keep people living on the edge. His narrative is also reminiscent of our local "talk-story," which is casual and rambling, can encompass several different tales at once, digresses and focuses, and then wham: there's the point, just when you were beginning to think there wasn't one. It's so much friendlier and illuminating than a diesel-driven, one-lane story.

I really enjoyed this detailed account of the 1906 earthquake in San Francisco. Simon Winchester put a great deal of work into all of the social as well as geological conditions of that time. I loved how he combined so many short stories into the telling of this great event. I was particularly interested in the story of the Pentecostal movement and how it began. Simon takes the reader way back in time and then leads him through many fascinating stories. Since he wrote this book however, earthquake prediction has become much more accurate, thanks in part to quakeprediction.com.

I want to have dinner party with Simon Winchester!

Another wonderful book by a terrific author - and narrator. A Crack in the Edge of the World is a fascinating, enlightening and thought-provoking compilation of history and its lessons,geology, sociology, and the interconnectedness of, well, everything. I have enjoyed all of Mr. Winchester's books, and think that, with his knowledge and creative insights, he'd be an amazing dinner guest. I totally recommend this book.

Horrible and boring. I felt cheated.

Lots of good, interesting material, but Winchester's presentation of it is disorganized. Some of the material is irrelevant. There is a "horrible" Wal-Mart in the Yukon Territory. What does that have to do with anything else in the book?