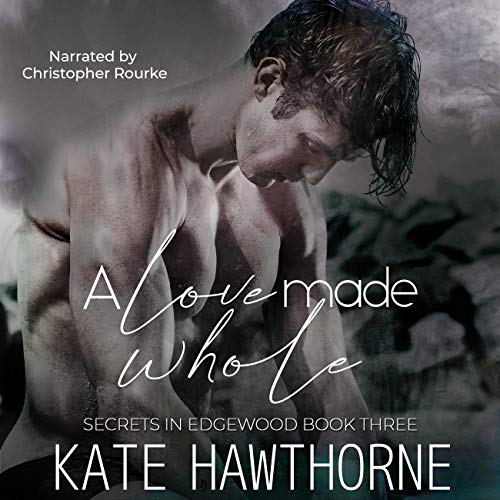 A Love Made Whole

Written by: Kate Hawthorne
Narrated by: Christopher Rourke
Try for $0.00

I’m not the person you’re pretending I am.

Graham is still reeling from the pain of separation from his husband, Calvin. He forces himself to wade back into the dating pool with the help of a handsome stranger who offers to remind what it’s like to put himself out there.

Are you saying you want to go on a date with me?

Emory has his hands full with Graham when his new boss, Calvin, asks him out for drinks. He’s not sure there’s a future with Graham, even though he wouldn’t mind one, so he tells Calvin yes. He has no idea the men he’s about to fall for are already desperately in love…with each other.

Did you know it was me?

When his paralegal suggests a group date, Calvin bucks tradition and tells the younger man yes. He’s not expecting Emory’s other boyfriend to be his estranged husband, and he’s definitely not expecting what comes next.

That’s against the rules.

Calvin, Graham, and Emory find themselves in a delicate relationship with rules and structure, but hearts are wild and refuse to listen. Emory is ready to commit, but Calvin and Graham’s past threatens their future and the chance to see their love made whole.

I didn’t know I’d fall in love with you.

What listeners say about A Love Made Whole

Emory Edgewood has just returned to the town of Edgewood, the town that bears his family’s name and he does not want to be there. His father insisted he return, although it’s never gone into detail why he was asked to return and their relationship isn’t looked at in detail. Calvin and Graham are married, but separated, and meet Emory separately and start to fall for him. The dynamics here are explored well as a sense of Calvin and Graham’s relationship is defined with just the right amount of detail and insight. Although the fact that Calvin is Emory’s boss is never given any real consideration. Emory then quickly becomes a part of their relationship as the men navigate all the facets of how to be a triad.

Christopher Rourke has a nice tone of voice. He gives an understated performance with the book being mostly read with little inflection in tone and did sound robotic at times. The men all sounded the same and although we get different points of view from the men it was not always distinct who was speaking. It’s still a pleasant way to enjoy this story and see Graham, Calvin, and Emory develop individually and then a relationship between the three of them.

I enjoy this book very much; however, there was something about the narration that I just couldn't get into. The narrator has a great voice but sometimes it was hard to differentiate between the characters.

A Love Made Whole

Three different men and one complicated relationship. When Emory finds himself in the middle of a tug of war between two men, he is not sure what to do. On a whim he agrees to let the men meet. What comes next would put a strain on anyone, but Emory makes a choice that could break his heart forever or it could be his dream come true. It all comes down to Graham and Calvin and the love that they have for each other as well as their love for Emory.

A coincidence of a lifetime brings these three men together. Emory brings a spark to a failing marriage and has Graham and Calvin remembering their love but is it enough? This is a sweet story that gives listeners three strong characters with intense emotions. Emory is a young man forced to be something he is not just for his name. As we see learn more, we see just what a smart and strong man he is on his own. He is a force to be dealt with and Graham and Calvin learn as they spend more time with him. Their relationship is full of ups and downs and it was nice to see that they are willing to try and fight for it. I enjoyed seeing the difference in all three men and how they try to work through it all. This is a hot and emotional story filled with strong characters that pulls at your heart. Narrator Christopher Rourke does a good job of bringing the emotions that these men have to life and I was quickly immersed into the story.

A Love Made Whole is the third book in the Secrets in Edgewood series by Kate Hawthorne. Calvin, Graham and Emory... they are so sweet, so hot... so perfect! I love the three of them together... the way that Emory filled a missing piece that allowed Calvin and Graham to fit once again.

The story is well written, with interesting characters and an entertaining story. Sweet and sexy, with some feels. Definitely a book I see myself rereading.

Christopher Rourke does a fantastic job narrating this story.  Clear recording and voicework.  The characters cane alive and the story shined in this performance.