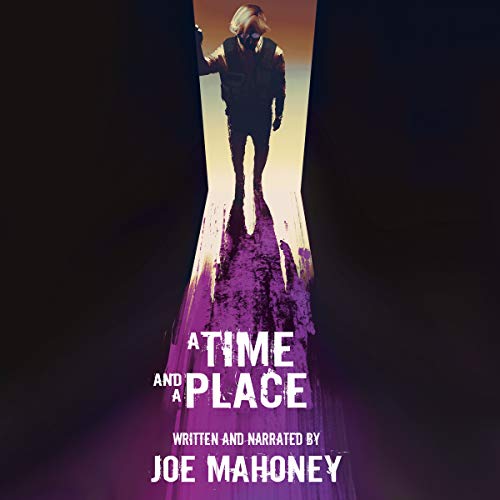 A Time and a Place

Calling upon Doctor Humphrey for assistance has not been particularly helpful because the good doctor’s diagnosis of demonic possession is clearly preposterous. Even the demon currently ensconced on the front-room couch agrees it’s preposterous. But then, how else to explain the portal to another world through which his nephew and Humphrey have just now disappeared?

Barnabus knows their only chance of rescue is for Barnabus J. Wildebear himself to step up and go through that portal.

Thus begins an existential romp across space and time, trampling on Barnabus’ assumptions about causality, free will, identity, good, and evil. Can Barnabus save his nephew - and incidentally, all of humanity?

"Mahoney’s work is great for those who like their speculative fiction thoughtful, eloquent, and messy." (Publisher’s Weekly)

What listeners say about A Time and a Place

I really enjoyed Joe Mahoney’s narration of “A Time and a Place”. I had read this book before, but enjoyed his audio version even more. His telling of this fast-paced time-travel adventure captured the fun and humour of the book. However, it was the emotion behind the origins of the conflict that really got me. It seems frighteningly possible with today’s global politics. I highly recommend this audiobook!

A Time and a Place is the debut novel of Joe Mahoney, a local Ontario author. I first met Joe some time ago at a local book fest in Whitby, and his book has been on the back burner ever since. Finally he’s come out with the audiobook – he’s done all the voice acting and editing himself – so I got myself a copy. It’s a science fiction, quasi-fantasy story.

A time and a place follows our hero and narrator Barnabus Wildebear – which is an awesome name. He’s essentially a John Everyman type character. He’s living on Prince Edward Island, he teaches high school English, and he’s the guardian of his teenage nephew, Ridley. We very much get the sense that Wildebear is coasting through life. He’s somewhat lacklustre as a guardian, he’s passive and non-confrontational, and he, we learn during a truth serum session, has never been in a relationship. He does like a good scotch, though.

The book opens with him greeting his friend Dr Humphrey, who’s agreed to come in and speak to Ridley, who’s been acting quite strange lately. The two men discover a somewhat New Agey, occult type book in Ridley’s room, and, when Wildebear speaks the name of the book, he sets in motion the events of the novel.

The book itself is a portal and transportation device, controlled by a demon, a genie, or an alien, or something else, and Ridley, it seems, has been seduced by this creature. Now Barnabus must involve himself in affairs from other worlds so he can get his nephew back.

One thing about Joe's style - he writes with this sort of absurdist acceptance of the fantastical reality he's created. Wildebear is your average John Everyman character, not living, as far as he was aware, in a sci-fi universe of jinns and interstellar war. Then he gets sucked into this, with Men in Black invading his home and Helena Blavatsky’s book coming to life, and inhabiting the body of a seagull, and at no point does he break down in shock and awe, cradling himself in the fetal position. In other words, there's no realist commentary on the surreal. Instead, a blind acceptance - which was mildly jarring at first. It almost took me out of it. Until that absurdist acceptance came through - everything is just absurd and there's no point in dwelling on it. There's a comedy here too, slightly muted but there. I actually laughed out loud when Wildebear was arguing with Jack Poirier. This all interweaves into Joe's style, which is actually quite pronounced for a first novel.

There’s some good philosophical stuff in here too. He muses on issues of predestination and free will, good and evil as it relates to intentionality – some deep stuff for a first novel, especially one with squid-like supervillains and anthropomorphic cats.

As for the audio performance, Mahoney’s done all the voice acting and editing himself. The editing is completely seamless, and he does a pretty good job of portraying different voices – better than I’d expect from a production performed by the author.

I enjoyed this novel, more than I thought I would. Mahoney writes with a practised wit. Parts of the novel seemed a little rushed, and there’s questions left unanswered, but overall I enjoyed it.

A time and a place

A fast-paced sci-fi novel It follows Wildebear through a series of strange and deadly episodes, all in an effort to save his nephew Ridley.

I received this audio book for free in exchange for my honest review. The author did a fantastic job with both the writing and the narration on this exciting story.

A Time and a Place

What a story! A mans nephew/ward has sudden changes in his behaviour.Upon investigation,we find a books influence might be to blame.This was so well written and intriguing,I did not want to put it down! Joe Mahoney was also a fine narrator.Looking forward to more from him. I was given this book by the narrator,author or publisher free for an honest review.

It was the demon Ugertha that drew me in. S/he is a complex character with murky motives. Barnabus must save his nephew, Ridley. He has no idea how he will do it nor what it will cost him. For the first half of the book, my attention was firmly held. There’s these sentient cat-like aliens, the T’Klee, and the evil & dangerous Necronians, who have many tentacles. Barnabus will find allies and enemies around every corner.

The second half of the book got a bit muddled for me. I felt I needed a diagram to keep track of it all. There’s some mind-muddling going on so I was never sure how much of what was simply in Barnabus’s head and how much was happening real time. Plus, there’s the time travel bit. So we have multiple copies of some characters interacting with all of it.

The T’Klee were my favorite bit. I love the idea of large cats with opposable thumbs, their own language & culture, and having to fight the technologically advanced Necronians. Also Swipe was a clever young T’Klee caught up in a bad situation. I was rooting for her the entire time even though I knew things would never be all rainbows and butterflies for her again.

There were few female characters. Besides Swipe, there’s Barnabus’s dead sister (who provides emotional fuel for him and Ridley to get stuff done), and then the scientist Sara (who is always described by her awesome looks first and second and her mental abilities third). Perhaps we can count Ugertha as a female character, but she’s really a mix of all the people she’s absorbed over the years. It would have been nice to have a bit more from the ladies.

The ending rallies a bit. I was still confused about Ugertha who I think becomes known as Jacques… but then there’s also Jack, right? These seem to be all the same ‘demon’ (or alien) at different points in time. But I’m not sure, which is it what bothered me. I want to be sure about such things by the end of a book. Speaking of that ending, it gets rather sentimental and strives for deep thoughts. I found it a little sappy. I wanted a more definitive ending, perhaps following a rousing action scene. All together, it has some fun ideas, a few great scenes, and the T’Klee are most memorable. 3.5/5 stars.

The Narration: Joe Mahoney has narrated his own story. He does a decent job but needs a little polishing all around. He had distinct character voices for all the characters (yay!). There were a few mouth noises here and there. The pacing was just a touch slow but the narration was also clear. The female voices were pretty good though sometimes they could have used a little more femininity. 3.5/5 stars.

I received this audiobook as part of my participation in a blog tour with Audiobookworm Promotions. The tour is being sponsored by Joe Mahoney. The gifting of this audiobook did not affect my opinion of it.

After being immersed in this audiobook and the plethora of worlds and adventures that Barnabas J. Wildebeast a school teacher on his summer break gets embroiled in an adventure so fantastic it can’t help but carry you along for the ride. What a ride this audio was when Barnabas comes  home to find out that nephew who he has looked after for the last couple of years due to his sister’s death. Ridley has been recruited by a jinn to fight in a war on another world.
This is the start of an adventure so spectacular and imaginative Joe Mahoney sends the reader on such incredible journeys  you don’t want to go home, even if there are some that are weird .
Joe Mahoney also the narrator, I have to say with a voice like that I would listen to anything he narrated. I loved this mesmerising audiobook with its non stop action and adventure.
I received this audiobook as part of my participation in a blog tour with Audiobookworm Promotions. The tour is being sponsored by Joe Mahoney. The gifting of this audiobook did not affect my opinion of it.

I received this free for an honest review from the author or narrator. I'm sorry to say I honestly couldn't get my head around the story. I didn't make sense to me.