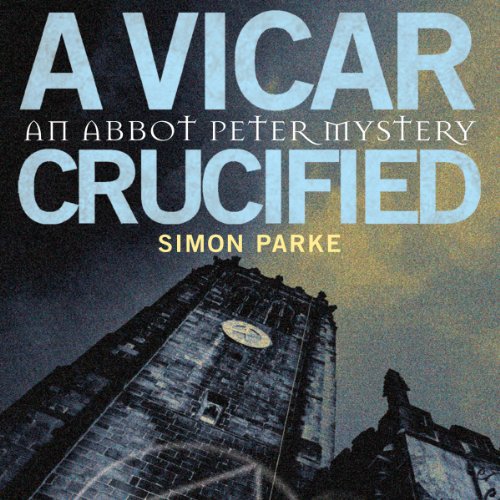 Written by: Simon Parke
Narrated by: Bob Sinfield
Try for $0.00

Abbot Peter has recently swapped leadership of a remote monastery in the Sinai desert for retirement in the bleak and stormy English seaside town of Stormhaven. When the local vicar is discovered crucified naked, in the vestry, the Abbot is invited to act as a Special Witness investigator. He partners the attractive and ambitious Detective Inspector Tamsin Shah - and discovers a surprising connection along the way.

Shocked by such cruel death, the church community adjusts to the knowledge that the murderer is one of them. The curate? The bishop? The treasurer? As cold waves crash against the winter shoreline, suspicion replaces friendship at St Michaels: no one is safe and no one trusted. Abbot Peter believes the mystical nine-point enneagram symbol can help. But as the ravenous press descends on the town and secrets unravel, there will be more victims and a desperate climax before the hidden truth becomes clear.

What listeners say about A Vicar, Crucified

If you're looking for something really unusual...

This book is either really interesting or really quirky. At times, both.

Simon Parke has packed a lot (too much?) into a small space. There is a murder mystery that has it's own twist ( how often is it crucifixion?). There is a parallel story that takes place in the Sinai desert depicting the finding of the enneagram, and some side efforts to explain what the enneagram is. Then the author clearly wants to instruct the reader further by using it as the centerpiece of sleuthing. Oh, and there are some fairly interesting comments scattered throughout of a kind of philosophical or theological bent that leaves the reader some intriguing ideas to ponder.

What works/what doesn't? Well, for me, I found it interesting to learn more about the enneagram, a method of understanding people's personality styles. I had heard of it before, so enjoyed that part. I rather liked Abbott Peter (who is generally the one who raises the philosophical questions as part of his own musings). I felt the side story, of Gurdjieff and the quest for the enneagram were a bit of distraction because it felt like the author was cramming too much into the book. But frankly, even though I am interested in the enneagram, when there were passages that laboriously explained all the nine aspects--however necessary to grasp it's use--I felt some impatience. I wondered if the book was having trouble deciding whether it wanted to be a simple mystery story, or something more like a college lecture hall reading? So what makes this hard to review was that I truly liked it all, but not the way it was all shoved together.

Kudos to Simon Parke, who has really interesting, unusual and thought-provoking ideas, for attempting to share them via a medium that serves to educate and entertain at the same time. However I wish he had been a bit less intent on the education piece about the enneagram (but kept the thoughtful questions in, because they worked well coming from the Abbott as a character). That's just me. I must say that this book is really different from most I've read. I'll also say that my mind will be mulling over some of the questions that were put forth to ponder. But somehow, I would rather he had woven it together a little better. Some of the changes from story to education were sort of abrupt. And some of the characters felt forced and clearly drawn to illustrate his points more than supporting the story itself.

I really liked this book. I really did not like this book. I'd say you'll have to decide for yourself.