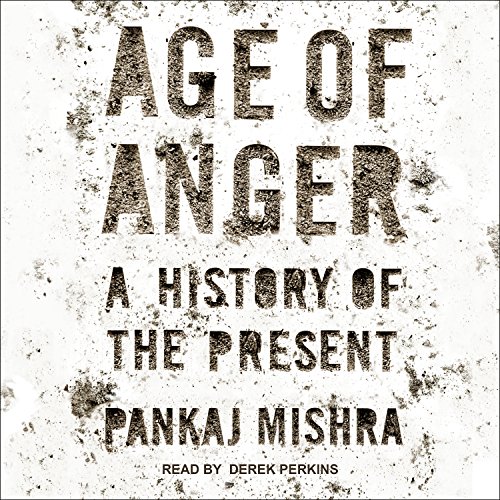 Written by: Pankaj Mishra
Narrated by: Derek Perkins
Try for $0.00

How can we explain the origins of the great wave of paranoid hatreds that seem inescapable in our close-knit world - from American shooters and ISIS to Donald Trump, from a rise in vengeful nationalism to racism and misogyny on social media? In Age of Anger, Pankaj Mishra answers our bewilderment by casting his gaze back to the 18th century before leading us to the present. As the world became modern, those who were unable to enjoy its promises of freedom, stability, and prosperity were increasingly susceptible to demagogues. It was from among the ranks of the disaffected that the militants of the 19th century arose - angry young men who became cultural nationalists in Germany, messianic revolutionaries in Russia, bellicose chauvinists in Italy, and anarchist terrorists internationally. Today, just as then, the embrace of mass politics and technology and the pursuit of wealth and individualism have cast many more billions adrift, uprooted from tradition but still far from modernity - with the same terrible results. Making startling connections and comparisons, Age of Anger is a book of immense urgency and profound argument. It is a history of our present predicament unlike any other.

"In this urgent, profound and extraordinarily timely study, Pankaj Mishra follows the likes of Isaiah Berlin, John Gray, and Mark Lilla by delving into the past in order to throw light on our contemporary predicament, when the neglected and dispossessed of the world have suddenly risen up in Nietzschean ressentiment to transform the world we thought we knew." (John Banville)

What listeners say about Age of Anger

What made the experience of listening to Age of Anger the most enjoyable?

Difficult book, topic - but very very important subject area - very good research - his thesis is clear - not much help with reference to prescriptions on "how to solve".

Background context and Misra "draws the line" from Revolutions and Industrial Revolution to today's Sense or Rage.

Attention to detail - pronunciation of names.

Where we are - how we got here

Age of Anger
A History of the Present
By Panbkaj Mishra
406 pp Farrar, Straus & Giroux.

This is an important but difficult book. The books’ main thesis is:

• “We’ve seen this before” – a global sense of rage – as a reaction to the “modernity” brought about by 18th century political revolutions and the impacts of the Industrial Revolution. Then, as now according to Mishra believes the individual “feels ressentiment” – which Mishra defines as “an existential resentment of other people’s being, caused by an intense mix of envy and sense of humiliation and powerlessness”. Mishra details the rise of assassinations of heads-of-state as a result of this ressentiment. One example is the assassination of Archduke Francis Ferdinand – thought by some to be one of the proximate causes of the First World War. Also, it is a short step from large scale ressentiment – to a population’s turning to a demagogue. Mishra uses Putin and Erdogan as examples.

• Pankaj Mishra goes into great deal of detail discussing both German and Russian philosophers to support his main thesis. Mishra details the work of Johann Fichte, Mikhail Bakunin and Pyotr Kropotkin and their intellectual contributions.

• Mishra also states that there are no “counter-narratives” as yet available against this ressentiment – using ISIS as an example. There appears to be no “counter narrative” against the revolutionary actions that ISIS is undertaking.

Mishra also seems to indicate that this ressentiment is an ongoing problem (at a slow boil) – and Mishra doesn’t offer a short-term estimate of “what will happen” – Mishra offers phrases such as a “continuing Global Civil War” for the reader’s consideration.

Mishra closes with view that (unspecified) “new thinking” will be required to address this issue – ressentiment – effects of modernity – a feeling that democracy/government is not working for the ‘average person’ and the narrative that detail the benefit of authoritarianism.

Age of Anger – What America’s violent transition to modernity has in common with the rise of Islamic extremism. Laura Miller – The Slate Book Review – January 25, 2017.

Apocalypse Now: What’s Behind the Volatile Mood of Today’s American – and European – Voters – The Age of Anger – A History of the Present – Franklin Foer – The New York Times – February 13, 2017.

Disappointing. This book purports to explain the recent rise of far-right, anti-globalist sentiment around the world (Trump, Brexit, LePen, etc., to say nothing of Isis), but the author's thesis isn't very compelling. He argues that contemporary manifestations of nativism can be traced back to Rousseau, who reacted to Voltaire's glorification of reason by celebrating personal experience and intimate communities. This is a bit too neat for me, too schematic. Only in the epilogue does he introduce the idea of other forces at play in today's world, including the rise of previously disadvantaged groups and growing income inequality. These last two phenomena are of extreme importance, especially the economic chasm between working stiffs and the richest of the rich. The American Dream said that anyone could make it, but nowadays more people believe they were sold a bill of goods—they can never make it. I would have liked more discussion of that, but it's outside of Mishra's argument.

On another note, I was puzzled by the book's lack of organization. It seemed to have no structure, and there was a great deal of repetition.

On a positive note, Derek Perkins's narration was excellent, and he made a conscientious effort to pronounce the many foreign expressions correctly, even if he didn't always succeed.

Pankaj Mishra shows that today is yesterday in “Age of Anger”. President Trump returns America to the ritual of nationalism; i.e. societies’ position of “all against all”. Mishra’s observations imply either enlightenment is nigh, or an end is coming.

Today’s tribalist anger (aka nationalism) carries the imprimatur of an overheated world; not only by nuclear holocaust but by climate change. This is not a new “Age of Anger”. It is the same anger from the same origin. Its origin is human ignorance; i.e. an ignorance existing from the beginning of time. It is revivified by Mishra’s recount of violence between and among competing cultures.

Mishra explains how concepts of materialism and well-being are interpreted within and among nation-states. As materialism becomes a measure of well-being--money, power, and prestige set a precedent for valuing human existence in a Spenserian creed of “all against all”. Mishra reviews the beliefs of Voltaire, Nietzsche, and Kant to show how materialism, supermen, and human perception control the course of history. Voltaire ranks wealth; Nietzsche ranks power, and Kant ranks perception as measures of human worth.

Mishra suggests anger has risen through generations, within and among nations, that explain world wars, genocidal acts, and atrocities beyond imagining. There have been respites from this cycle of violence. Unless or until human beings see themselves as part of the same society, the world will end in the Armageddon of biblical imagination.

Remarkable in its historical and geographic scope

from ISIS "madness" to the common resentment of dwindling middle-classes and disaffected youth and everything in between, this is a survey of global scope which shows the same process of infinite desire and rivalries shedding away all traditional inhibitions as well as meanings, political, cultural and religious", previously assigned to conflicts. Relevant readings of Hobbes, Rousseau and Tocqueville, the German romantics and Russian Novelists, just to name a few. if you saw the point of René Girard' s Battling to the End, this is in a way an extension of this book to a global dimension.

Much Needed Dialogue for our Times

I loved this book and highly recommend following Pankaj Mishra and his work. However, I found some chunks to be a bit boring at times and my lackluster enthusiasm for historical details might have had something to do with that. Even so, Enlightenment ideas has a lot to do with today's social malaise and this work beings that into light and can help turn the dialogue of dualism and false dichotomies into a consultation of mutual understanding.

I really wanted to like this book. Premise sounded good and most reviews were good. The problem, as a few pointed out, was that it felt disorganized. There seemed to be a lot of jumping from era to era. It was very hard to follow.

On top of that the author used a lot of wordy language that just made it harder to follow. There were also many foreign terms used as though they were common knowledge and, therefore, not explained.

Overall this seems like a book meant for people who already have extensive historical knowledge that may be interested in a new theory that ties various events together. This does not seem like a book suited for the average person who might be hoping to get some clearly explained historical information.

Language and Ideas are Highbrow

The language and ideas are highbrow, but they are not always well connected for the reader or listener. Some interesting concepts that are global in scope and highly abstract, but are hard to connect to concrete world. It might be one of those books that are better read than listened to. One that you underline or write in the margins, so you can flip back to an earlier idea.

Thank you Pankaj! A true masterpiece!

This book is an amazing piece of work. Everyone should read it. EVERYONE

An excellent place to start

More an argument than necessarily a history, this book nevertheless accomplishes a complex feat by providing context and even occasional empathy for the sources and products of our angry present. While not comprehensive (but then, no history that dips so close to the present can be), it provides a far more satisfying argument to the state of the present than those I had before, and has inspired me to dig deeper