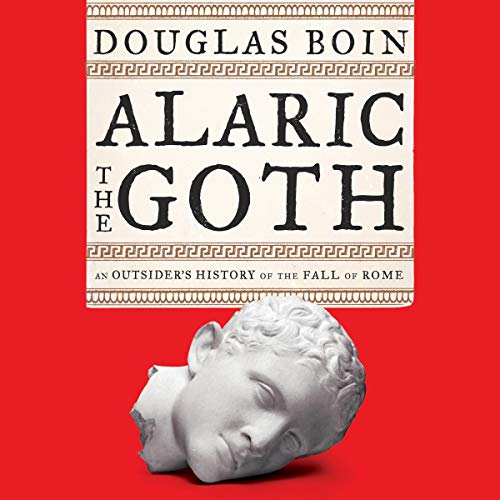 Written by: Douglas Boin
Narrated by: Chris MacDonnell
Try for $0.00

Denied citizenship by the Roman Empire, a soldier named Alaric changed history by unleashing a surprise attack on the capital city of an unjust empire. Stigmatized and relegated to the margins of Roman society, the Goths were violent "barbarians" who destroyed "civilization," at least in the conventional story of Rome's collapse. But a slight shift of perspective brings their history, and ours, shockingly alive.

Alaric grew up near the river border that separated Gothic territory from Roman. He survived a border policy that separated migrant children from their parents, and he was denied benefits he likely expected from military service. In stark contrast to the rising bigotry, intolerance, and zealotry among Romans during Alaric's lifetime, the Goths, as practicing Christians, valued religious pluralism and tolerance.

The marginalized Goths preserved virtues of the ancient world that we take for granted. The three nights of riots Alaric and the Goths brought to the capital struck fear into the hearts of the powerful, but the riots were not without cause. Combining vivid storytelling and historical analysis, Douglas Boin reveals the Goths' complex and fascinating legacy in shaping our world.

What listeners say about Alaric the Goth

I chose this book as it seemed well reviewed and a new take on the famous fall of Rome. That said I was not a huge fan for the following reasons :
- the author's objective is clear to change the narrative that the Roman Empire is seen as the 'good guys'. That said he does not present a more balanced account, he just flips the script with the Romans seemingly being all bad and the Goths being a tolerant and good people. He also seems to judge the Romans very harshly by modern standards of pluralism.
- as the author admits at the start, there are major gaps in the information about Alaric's life. So it feels to me as not a story about him, but a story about this time in the Roman Empire with random facts and assumptions about Alaric.
- I found the author's tendency to jump around in time to make this book difficult to follow especially in audio form.
To summarize this is not a bad book, but it is not one I really enjoyed or would recommend

The Life and Times of Alaric

Alaric the Goth might be titled "The Life and Times of Alaric". He is the Barbarian leader who sacked Rome in 410, inspiring St. Augustine's The City of God. Alaric died soon after and was buried underneath a river bed with the choicest treasures of Rome never yet found. The primary focus is the period from the Battle of Adrianople in 378 to 410. It describes how the Goths were considered "outsiders", which is to say unwelcome immigrants, who were treated poorly by racist and xenophobic Roman citizens. They were abused while at the same time employed to the do the dirty work no one else wanted. The Goth's got their revenge. Alaric's life is not well documented so Boin takes the innovative approach of describing what we actually know about this period. For example we know Alaric spent time in Athens, and Boin describes Athens from archaeologic and written evidence - the popular plays, the city layout, it being a desirable address for up and coming Romans - and places it into context with Alaric's likely experiences there at that time. In this way we travel through his life and footsteps around the Roman Empire. The small details bring it alive in a way no other book about this period has before, that I have read. It's a fascinating and effective approach to history when documentation is otherwise sparse. This period is endlessly fascinating, Boin has placed the transition from Roman to Barbarian in technicolor showing both peaceful transition and violent change, as told through the microhistory of a single man.

if you want to learn more about the goths told from their perspective this is a great place to start. well organized and well written. enjoyable read

The fall of Rome-The rest of the story

The author does an amazing job of reconstructing the career of Aleric the Goth; who was a Roman General. Spoiler alert: As a Goth, he was not given Roman citizenship and was even slighted on pay for himself and his troops. While such abuse makes the case for why Aleric sacked Rome in 410 AD, and perhaps similar treatment led the Vandals to trash Rome again shortly after, I for one, was left wondering exactly how these two attacks had such a longstanding catastrophic effect on world civilization.

Truly a great book for someone who wasn’t as familiar with the Gothic culture. Alaric is a fascinating character lost in history until now.

Anachronistic & badly researched. Not what I expected at all. Sad. All historians manipulate facts, craft narratives, but this is just nonsense. Weird NeoLib take on the life of a famous historical figure that seems to live in its own world entirely. Can't recommend, even though it's an interesting idea.

I enjoyed this way more then I expected. it had explanations for things I didn't think to connect. it's got more then gothic history, as would be right because they were a tribe on the move. I liked the info about the religious subjects and forming of the christianity.
I highly recommend it. the author adds well researched takes on issues and events I believe we previously misrepresented.
I enjoyed it

Evidently there isn't enough information on Alaric to warrant writing a book about him. I've never read/heard a book that, in the absence of evidence, said things like "he almost certainly" or "he probably did" with such incredible frequency. The information presented about Goths in 4th and 5th century Rome was better but still was light on factual support.

The author is clearly trying to tie the fall of rome in with modern politics, unfortunately they distort the actual history in doing so; no the Romans didnt suddenly become xenophobic before the fall of rome, they always were massively xenophobic, even at the height of their empire, as were almost all ancient civilizations. its so painfully obvious the narrative the author is trying to forge, often skipping over some facts or presenting others in a "different light". Modern politics dont belong in ancient historical narratives. Many authors make modern parallels, but they usually keep it in the preface or introduction.

More a discussion of an era

Not a lot of hard facts concerning Alaric. The discussion of Rome during Alaric's era was interesting. Not sure I buy it's message on immigration and citizenship, without doing more reading on my part. Read Adrian Goldsworthy book on the fall of Rome, if you want a different perspective.