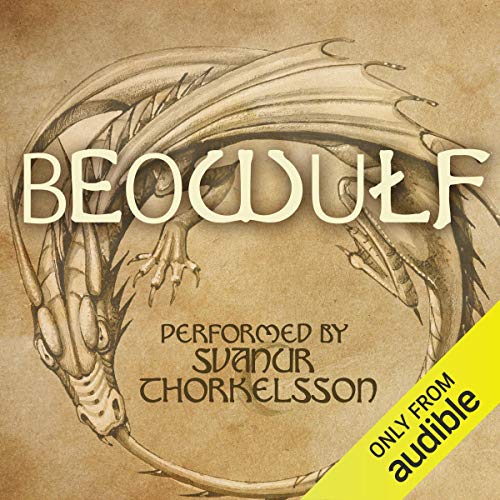 Written by: Anonymous
Narrated by: Svanur Thorkelsson
Try for $0.00

The Old English epic poem Beowulf, recorded in its original Saxon dialect for the first time.

Performed by Icelandic poet, playwright, professional storyteller and performer Svanur Thorkelsson, Audible’s production gives listeners the opportunity to experience how it might have felt to hear bards recite sections of the 3000-line poem from memory in Anglo Saxon dining halls. Audible’s Beowulf recaptures the heroic style and vast scale of what can be considered ‘England’s first native audiobook’.

Considered one of the most important pieces of English literature, Beowulf has gripped audiences for over 1,000 years. It has been hugely influential on English and world literature – in particular Lord of the Rings and Game of Thrones – and has continued to be explored and reinterpreted through adaptations across mediums including novels, film, TV, opera, graphic novels and more.

Svanur Thorkelsson is a native Icelandic poet and a playwright. As a professional storyteller and a performer Svanur channels his passion for authentic Nordic and Anglo Saxon lore and legends. His work includes media such as radio, theatre and television as well as participation in public and private events. Svanur has also over the years worked to promote and partake in bardic events in the UK and Iceland.

What listeners say about Beowulf

Recorded in Anglo-Saxon, not Modern English

They probably should have mentioned that the recording is performed in early Anglo-Saxon, which I guess technically is English. Either way, an English speaker won’t comprehend any of this.

In teaching myself anglo-saxon english, I’ve longed for a translation of beowulf to be read aloud for so long. There need to be more texts read in their original dialect, because this is glorious.

I give this an overall two stars because plenty of effort went into this production, and it's good to have a spoken version of Beowulf in the original. Unfortunately, although the text is Old English, the pronunciation is entirely wrong. The narrator is pronouncing the text in something close to Icelandic (as far as I can tell), mispronouncing almost every word, in both vowels and consonants. It doesn't sound like Old English at all. This wouldn't be a big deal if this was some Youtuber offering his own interpretation. It does matter because this is included with Audible, purporting to be "authentic" and "in the original Saxon dialect." Experts disagree on some of the finer points of Old English pronunciation, such as whether to pronounce a short "I" as in "fish" or as in "eat," but none of them would pronounce "aethelingas" as "eye-thlings." That pronunciation doesn't occur in any dialect of Old English, and Beowulf is written in West Saxon, which is the most well understood and most studied dialect (of Northumbrian, Kentish, Mercian, and West Saxon). The narrator also pronounces "w," which was its own letter in Old English, wynn, as "v" as in Modern German.

This pronunciation may be Icelandic, but Icelandic has about as much to do with Old English as Spanish has to do with Romanian. They are in the same language family, but they are not mutually intelligible, and have different phonologies (the above-mentioned "v" is present as the letter "f" in the middle of a word, as "ofen" is the root of "oven"). Icelandic just has nothing to do with Beowulf or Old English.

I just don't want listeners to get the impression that this is actually Old English. It isn't. It's the right words, said completely wrong. It's not "authentic" or the "original dialect." It is absolutely not "what it would sound like in the halls of the Anglo Saxons." The meter is incorrect, the pronunciation is incorrect. It's not Old English. We have over 300 years of expert analysis and philology to tell us what Old English sounded like, and it isn't this. If you want an entertaining reading of Beowulf, probably the best one is by Benjamin Bagby. Even he admits it's not "authentic," but he did his best, consulting the experts.

Its not in English

In the details it says "Language: English." My guess is its in a Germanic language but I don't know. the only English is when the narrator says the Stanza.

Wonderful poetic reading of the classic.

Thorkelsson gives us the phrasing and passion of the book in its original tongue. If you’ve any doubts, listen to Stanza six.

such a great experience

great performance by an actual bard. i have always loved older dialects of english, but modern is fine too.

not in modern english

I’ve been looking for a recording in Old English. Some day…. I may even understand the words.

Build a fire, pour some mead, and enjoy!

Imagine yourself in eighth-century England, in the hall of a noble lord. After dinner, as the mead flows, the bard takes his seat before the fire and a hush comes over the room. Suddenly, the poetry is alive, as heroes and monsters battle. The bard’s recitation is so vivid, it doesn’t seem to matter if you can’t understand the words and the poetry carries you along. You see the scene in the fire, and even though the story is familiar, everyone is spellbound by the storyteller. Now you know why bards are treated with such respect!

Ok, true, its not in modern English. Like most folks, I’m not a medieval scholar and I can’t understand the story. Nevertheless,I thoroughly enjoyed the whole performance. I’d like to listen again while reading a translation because the Thorkelsson makes the poetry so beautiful and alive. If you ever wondered how alliterative verse worked in real life, this is a beautiful way to experience it.

Thorkelsson’s voice is so warm and rich too — I kept thinking, it seems like you asked your great uncle — you know, the one from The Old Country who usually just sits in the corner smoking his pipe and smiling — to help you with a school project by reading a bit of this epic and a week later unexpectedly got a recording of the whole thing because he wasn't sure exactly which bit you needed. It just seems like he wants you to love it as much as he does, and it comes alive because for him, it IS alive.

So, give it a listen. Maybe light your own fire, or get out the candles. Get some mead or beer or the intoxicant of your choice and let it wash over you. Enjoy the experience that is Beowulf in the original.

It is so hard to find good recordings of old english. and it's free, so awesome.